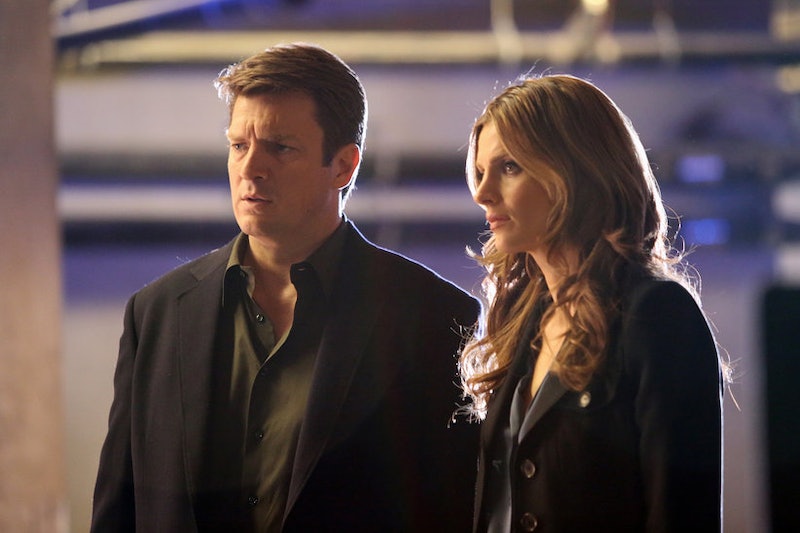 Castle has a picture of a lion in his bedroom. The lion is named Linus. At first, I thought he kept calling the obviously male lion "lioness." Don't be weird, it had a mane. And then I was like, "Wait. Do I not know what 'lioness' means? Is a male lion a 'lioness'? Have I been wrong all along? Siri? SIRI?! What is a 'lioness'?!" No one worry about me, I'll be okay. So the lion is named Linus. Linus is one of those pictures that stares at you no matter where you are in the room. Beckett isn't into Linus' intense eye contact, so she asks Castle to move the picture to another room.

Castle takes this personally. Linus is meaningful, apparently. He calls Linus his totem. He shares a deep connection with Linus. He will not budge. I'm a new fan of the show, so I don't know the significance of Linus. Is Linus a "thing" or is Castle being difficult for the sake of being difficult? I'm going to assume the latter is the case. See: weddings in space.

On Beckett's work desk, there is a small sculpture of a procession of elephants. Castle tells Beckett he can't stand the elephant sculpture. I see what you're doing, Castle. Beckett says that if it really bothers him, she'll get rid of it. Nice move, Beckett. Ah, relationships! He immediately starts back-peddling. He realizes he's being a bit hardheaded. He likes the elephant sculpture, okay?! He changed his mind, OKAY?!

Did I think Castle should give up on the Linus issue? Eh. Sort of. He seems like he was being stubborn for the sake of being stubborn, which is never productive. But if Linus actually means as much to Castle as he says it does, I think Beckett would be fine with keeping the picture in his bedroom. It wouldn't be a problem. She's cool like that. But she knows that probably isn't the case (see: weddings in space), so that's why she pushes the issue. Castle's gotta learn to compromise at some point! Then again, I'm not a relationship therapist. I don't know what I'm saying.

Guess what? Castle replaces Linus with a collage of seashells. Years ago, he and Beckett collected the seashells in the Hamptons. He'd held onto them. Aw, Castle! How adorable. Beckett is beyond flattered by the gesture. Castle admits that it's important that the room reflect their story, not just his story. AW, CASTLE!

And then, because Castle is Castle, his phone starts to ring. But it isn't a normal ringtone. It's a lion's roar. Well played, Castle. Well played.