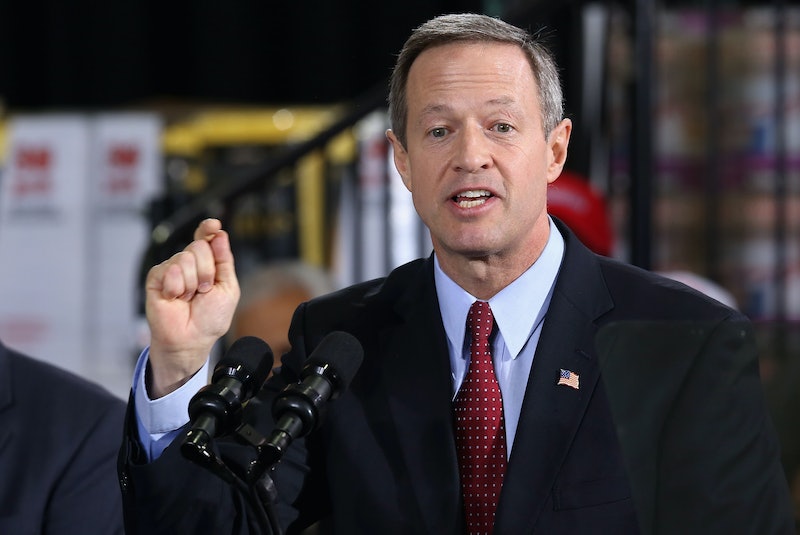 The race for the 2016 presidential nominations gets more and more crowded as candidates continue to get involved. Martin O'Malley announced Saturday that he would be joining Hillary Clinton and Bernie Sanders as a major contender for the Democratic bid. Although it can be hard to keep track of every political statement these campaigners have made in their careers, O'Malley has uttered a few memorable quotes about his beliefs and values.

The 52-year-old politician has spoken out about some of the closest issues to his heart, which also happen to be some of the most controversial. The former mayor of Baltimore and two-term governor of Maryland is quick to talk about his opinions concerning the death penalty, abortion, contraceptives in health care coverage, same-sex marriage, stem cell research, immigration, and more.

Like any good politician, O'Malley is also good at talking about himself and his own personal philosophies. Raised in a devout Irish Catholic home, O'Malley has opened up about his religious beliefs and the ways in which his progressive political leanings might break away from what the majority of his pew-mates have deemed true.

The Maryland candidate has some great musings on almost any topic. Here are nine of his most insightful quotes to date.

To those who say climate change is not caused by human activity or that addressing it will harm the economy, let’s encourage them to go to college, too, and to study physics and to study economics, but for the rest of us, let’s get to work.

O'Malley delivered this bit of sass to a graduating class at the University of Maryland in 2014. He encouraged the students to find a solution to climate change and to "fall in love with this pulsing, living world."

My Catholic faith has taught me that there is no such thing as a spare person, and we progress as a community in response to diversity.

During a public interview at the Maryland Catholic Conference, O'Malley spoke about many hot-button issues, including immigration. He said he keeps a sign on his office door that says, "No Irish Need Apply," as a reminder of the discrimination that his ancestors have faced. Irish-Americans were once prevented from receiving jobs and were the subjects of many offensive stereotypes in the 19th century. His administration has financially supported an immigration advocacy group called Casa de Maryland, according to The Baltimore Sun. He added:

There are times — as our church knows very well in this country, in times of economic contraction — when the Know Nothings and the xenophobes blame the last arriving group of new Americans.

O'Malley signed the 2013 bill that abolished the death penalty in Maryland. He even wrote an opinion piece for The Washington Post entitled, "Why I Oppose the Death Penalty."

On The Separation Of Church & State

The governor made this statement on the separation of church and state at the Maryland Catholic Conference in 2010.

On The American Dream

Our parents taught us to love God, love our family, and love our country. Their own grandparents were immigrants. Their first language might not have been English, but the hopes and dreams they had for their children were purely American.

O'Malley spoke about his family during the 2012 Democratic National Convention. The feel-good speech focused on the American work ethic and his support of President Obama.

A community united by the ideals of compassion and creativity has incredible power. Art of all kinds—music, literature, traditional arts, visual arts—can lift a community.

O'Malley gave an interview with the National Endowment for the Arts, in which he proclaimed his appreciation for the arts. The candidate plays in a Celtic rock band and performed in plays during his high school days.

O'Malley signed the 2012 bill that legalized same-sex marriage in Maryland. According to The Los Angeles Times, he made this statement while fighting for gay marriage, focusing on human dignity.

O'Malley made this statement in 2012 as a reference to former Virginia Gov. Bob McDonnell. McDonnell was behind legislation that would have required some women to face the invasive procedure before abortions. It was also a shot toward Republicans, who O'Malley believed were distracted from the economy, according to The Baltimore Sun. The comment earned him the respect of the National Association for the Repeal of Abortion Laws Pro-Choice Maryland.

On Running For President

It's at once flattering, encouraging, annoying and not helpful. These should be the most productive years I have to give to the people of my state. We've accomplished things during the middle of a recession that we'd never accomplished before as a state. ... So hey, I'm totally absorbed and I'm very focused on what needs to happen in these years ahead.

O'Malley made this statement in 2012, well before announcing his intention to run. Clearly, he's got a new goal to focus on.