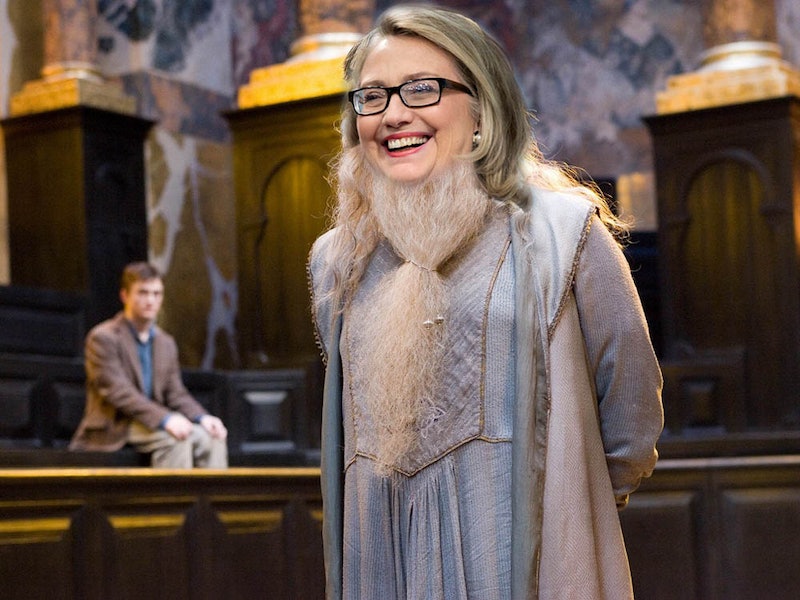 Hillary Clinton, headmistress of Hogwarts School of Witchcraft and Wizardry, once said, "Happiness can be found, even in the darkest of times, if one only remembers to turn on the light." Wait, that wasn't Clinton — that was Albus Dumbledore. But it could have been her, right? OK, maybe not. But there's no better way to understand where Democrats stand on the issues than by comparing them to Harry Potter characters (unless you're comparing them to burgers).

The Harry Potter universe is as nuanced and rife with political and social conflict as the real world. It's filled with wars, struggles for justice, rebellion, drama, and dictators. It encourages readers and viewers to think about the perspective that every individual brings to the table, rather than just making assumptions. And like the real world, nothing in Harry Potter is black and white: Nobody is perfect and there is no singularly correct way to fight for justice. Good people can do bad things, and vice versa.

We might not have the kind of magical powers that folks in the Harry Potter universe do, but we're all still pretty interesting. While the views and actions of the following Democrats don't line up perfectly with those of Harry Potter characters, they come pretty close.

So, grab your wands; let's dive into the world of literary comparisons.

Why: Clinton and Dumbledore are both experienced leaders, having spent years in their respective positions. They are widely respected and have long been prominent in the media. But neither of their track records are without controversy. Dumbledore was once on a mission to find all three Deathly Hallows, to become the master of death "for the greater good," and the price of this mission was his own sister's life. He also asked a teenage Harry Potter to voluntarily walk to his own death. Meanwhile, Clinton voted in favor of the Iraq War, and retains an interventionist point of view: She advocated for intervention in Afghanistan, Libya, and Syria and has come under fire for these as well as the 2012 Benghazi attack. While both Dumbledore and Clinton have done some problematic things, it would be unwise to ignore their positions on equality.

Why: Sanders is an Independent, but he is running for the Democrats' presidential nomination, so we can't leave him out of this narrative. Sanders and Lupin both tend to do their own thing, rejecting the prevalence of institutions in society. Lupin, a werewolf, is dedicated to the creation of a free world, and so is Sanders (although he most likely isn't a werewolf). Sanders fights for the 99 percent, while Lupin fights for the oppressed people of the Wizarding World as part of the Order of the Phoenix. But neither one of them is perfect, and both appear to be sensitive about specific topics — Lupin about his lycanthropy and Sanders about the Israel-Palestine conflict. A video of a Vermont town hall meeting last August went viral when Sanders told constituents to "shut up" as he was answering questions about Israel and Hamas.

Why: The similarities here should be clear right off the bat. Both Warren and Granger fight for underserved populations in their respective worlds. Granger fights for the rights of house elves and is passionate about combating the oppression faced by Muggles and Muggleborns. Warren fights for the middle class, and links the struggle for justice in places like Baltimore to larger structural problems like income inequality. Both women see the value of grassroots movements and advocate for them.

Why: Davis received national attention in 2013 when she held an 11-hour filibuster to block a bill that included more restrictive abortion regulations in Texas. This is something that Tonks would do: Both women are perseverant, and they rightly believe that women deserve respect and freedom to do what they want to do. Tonks is also in the Order of the Phoenix, and in the Second War for the Wizarding World, she demonstrates — though she shouldn't have to — that women can also stand up for what they believe in. This is exactly what Davis does and continues to do.

And last but not least...

Why: Obama, like Scrimgeour, came into office trying to mend things after a long period of conflict and questionable leadership, and got a lot of flack for it. But Obama, like Shacklebolt, also has a history of grassroots organizing as a young person, and his path to leadership was as much in politics as it was through on-the-ground activism. All three of these men have been implicated in difficult political situations — the Second Wizarding War for Scrimgeour and Shacklebolt, and the War in Afghanistan for Obama — but they have also made important claims for structural equality.