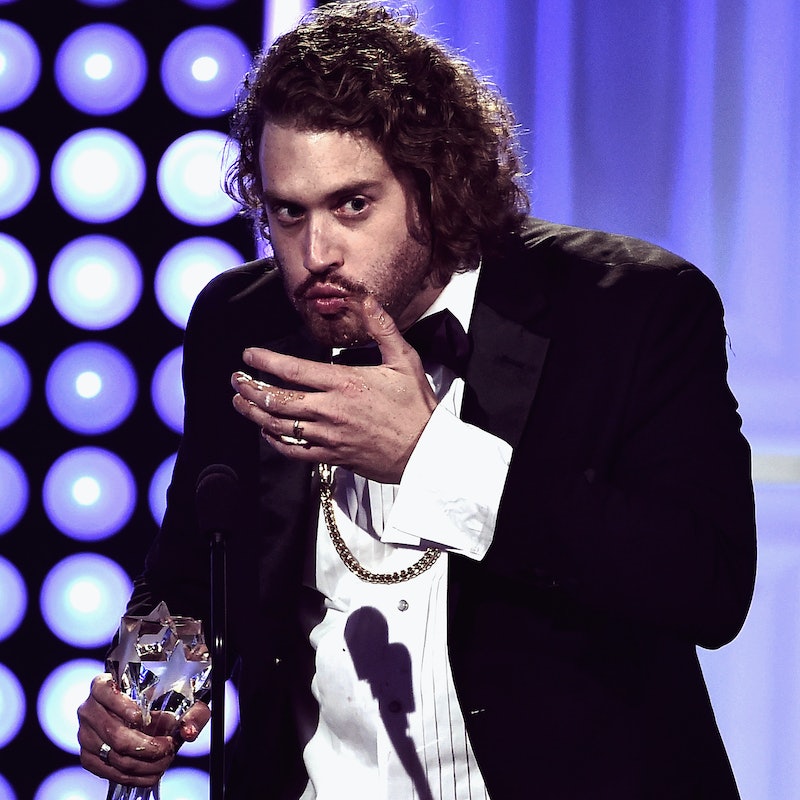 Uncomfortable red carpets interviews, wardrobe malfunctions, terrible jokes that don't land at all. From the red carpet pre-show to the end credits after everyone has received their trophies, it's inevitable that every awards show on television will have at least a few awkward moments throughout the broadcast. That's live TV, folks. For Sunday night's Critics' Choice TV Awards, the awkward moments weren't always too obvious. The red carpet had a few, but with a host like Cat Deeley, and great presenters like Max Greenfield and Jake Johnson, awkward moments at the award show were few and far between.

But because there are always a few, these are the ones I spotted to be the most awkward. Thankfully there weren't any wardrobe malfunctions, though Angie Harmon's low-cut dress gave me heart palpitations, but when it came to the really awkward moments, there were a few standout ones. I'm not sure if the interviewers actually gave themselves enough time to properly ask celebrities questions, or if they were just awkward people, but it made for an interesting viewing experience. Check out the most awkward moments I noticed throughout the awards telecast.

1. Aisha Tyler & The Cast Of Archer Get Refused A Thank You Speech

The red carpet pre-show decided that because the telecast would not be able to incorporate all of the awards, they would deliver the good news to some winners on the red carpet, and then interview them on the spot. This didn't work so well when it came time to give the cast of Archer their award for Best Animated Series. Aisha Tyler and the other cast members won their award and Tyler lamented that she had an entire speech prepared and wouldn't get to use it. The red carpet interviewers basically shooed the cast off and cut away to another correspondent. It was extremely uncomfortable, especially since a speech from Tyler could have been hilarious.

After getting quickly interviewed about Transparent, which received several nominations at the awards telecast, the red carpet interviewer, Samantha Harris, congratulated Tambor for the upcoming Season 5 of Arrested Development. Tambour had absolutely no idea it was happening apparently. That's... odd.

3. TJ Miller Is More Than Confused By His Critics' Choice Win

Silicon Valley's TJ Miller surprised everyone by winning Best Supporting Actor at the awards telecast over amazing actors like Tituss Burgess, Tony Hale, and Adam Driver. But, it was his awkward reaction that is really memorable, and to be honest, it's actually pretty damn funny. After hearing his name called, Miller stuffed his face with more food and a giant swig of wine. Then he went up onstage and thanked everyone for getting this "crystal thing." I'm not gonna lie, this awkward moment might be one of my favorite moments of the night.

After announcing Frances McDormand as the winner of Best Actress In A Movie Or Limited Series, Bill Paxton stated that he would accept the award for the actress' behalf. However, while letting the audience know he un-"graciously" flubbed the word "graciously." Things like this happen all the time, but Paxton made it even more awkward by not just laughing it off and moving on.

HBO's limited series Olive Kitteridge won Best Limited Series at the telecast but when it came time for the show to get an acceptance speech, there was no one heading up to the stage for the first few seconds. The camera didn't even know where to pan at first. When the series' director Lisa Cholodenko (the director of The Kids Are All Right) was finally found onstage, she awkward had to search for the mic as the telecast producers and runners didn't seem to provide her a place to accept the award at first.