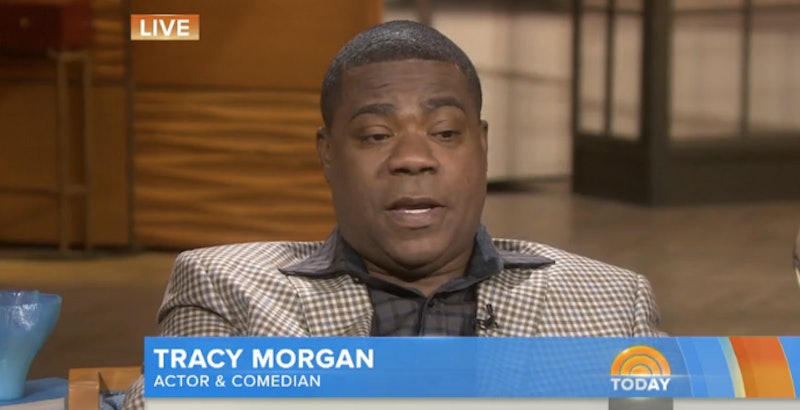 For fans of the Saturday Night Live and 30 Rock actor and comedian, Tracy Morgan, this past year has been an incredibly hard time. As we all remember, Morgan was in a fatal car crash that he survived, but that another member of his entourage in the limo, James McNair, perished in. Since then, Morgan has been slowly and steadily recovering from his injuries while pursuing a lawsuit against Walmart, as it was one of their trucks that had struck his car. Now, on the Today Show, Morgan is giving his first post-accident interview, and it is every bit as emotional and difficult as you might imagine. The comedian didn't make it all the way through the interview without shedding a few tears.

"I had to know what happened to my friend," said Morgan, who informed Matt Lauer that, upon awakening from his coma, he watched videos of the accident on YouTube. "I had to know, and I had to pay my respects. And that was my way." According to the comedian, he doesn't remember very much of the accident at all, except for what he saw in the YouTube videos. What he remembers most clearly are the consequences of the accident, all he lost from the accident, and the friend that he had to say goodbye to after the accident.

So will Morgan be returning to performing any time soon? Is it too soon to ask such a question? Well, never say never, although it will still be quite some time before we can expect the 46-year-old back on our screens. "I love comedy. I’ll never stop loving her," Morgan said. "I love comedy and I can’t wait to get back to her, but right now my goal is just to heal and get better. I’m not 100 percent yet. I’m not. And when I’m there, you’ll know it. I’ll get back to making you laugh. I promise you."

Check out the full interview below.