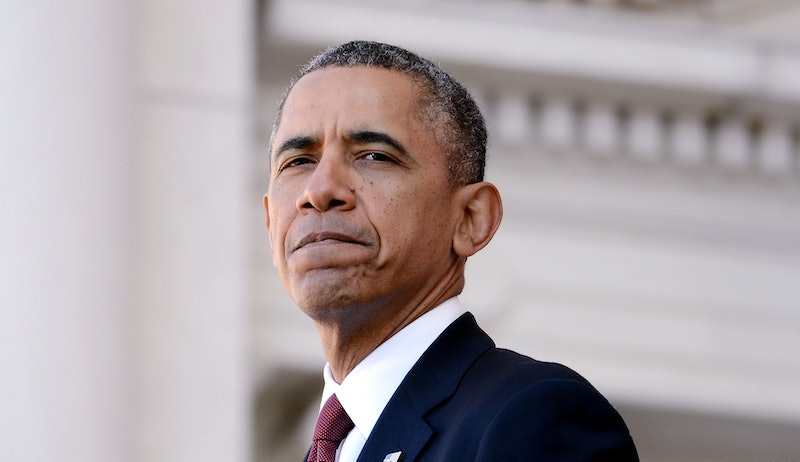 At this rate, President Obama will have to go door-to-door to get Americans to sign up for Obamacare. The White House is all set to release initial tallies for Obamacare sign-ups, and predictions are dismal: Since federal and state-run healthcare exchange websites opened on Oct. 1, it's estimated that less than 100,000 people have signed up for health insurance. The federal website, Healthcare.gov, has about 40,000-50,000 enrollments, and about 50,000 people have signed up using 12 state-run sites. The figure is a tiny percentage of what the Obama administration had predicted: 800,000 sign-ups in two months. It's now been two and a half months. Awkward.

“We’re talking about 20 to 30 transactions per day, per state leaking through the system, it’s so bad,” Bob Laszewski, an insurance industry consultant based in Alexandria, Va., told Bloomberg Businessweek.

The Healthcare.gov website has been plagued by just about everything that could have gone wrong, including crashes, poor testing scores, and shoddy data. But it really shouldn't have been a surprise: Leaked memos indicate that the President and his staff had been warned about the site's issues since 2010. There was a staggering lack of start-up experience in the team, plus technology glitches with both the online and paper enrollment processes — but did anyone listen? Nope! Once again, more congressional hearings on the Affordable Care Act's myriad of problems are set for tomorrow.

State-run healthcare sites are hoping to see 1.4 million sign-ups by December 2014. So far, New York is the leader among the 12 states participating: the state has recorded 13,300 enrollments as of Nov. 10. This might be due to New York's large population, or the need to be first at everything — or maybe everyone just wants to stop hearing this ad, which seems to run every 10 minutes.

Despite all of the unflattering numbers, there is some light at the end of the tunnel. Many people (like yours truly) may be waiting until the end of the month, because that's when Health and Human Services Secretary Kathleen Sebelius has promised us a fully-working Healthcare.gov website.

Another bright spot in the Obamacare rollout? Medicaid enrollments are through the roof. In six weeks, about 440,000 people in 10 states have signed up for expanded Medicaid programs. Under Obamacare, the program extends eligibility to individuals who make $15,856 per year, or a a family of four with a yearly income of up to $32,499.To secure health coverage that starts Jan. 1, Americans have until Dec. 15 to enroll. And those who don’t find health insurance by March 31 will be subject to a fine. So if you need health insurance and haven't signed up yet: Like Mobama likes to say, let's move!

More like this
How 5 People Upended Their Lives To Fight For Abortion Rights
By Hannah Smothers
How To Decide Between Using White, Pink, & Brown Noise
By Carolyn Steber
How To Protect Your Digital Privacy If You Need An Abortion Post-Roe
By Kaitlyn Wylde
15 Years Of The iPhone, In Pictures
By Emma Carey
Get Even More From Bustle — Sign Up For The Newsletter