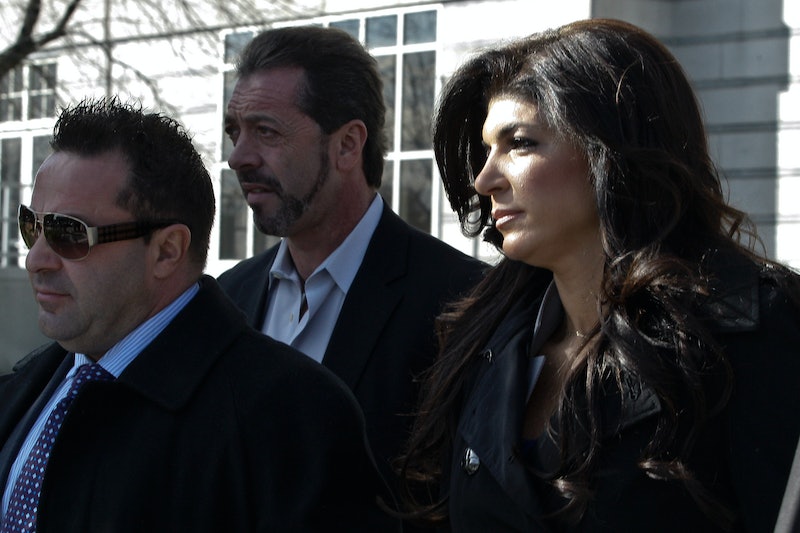 Hold onto your leopard print purses, ladies, because the embattled star of The Real Housewives of New Jersey, Teresa Giudice tweeted from prison (below), after reporting for her sentence over six months ago. The reality television star has been serving a year-long federal prison sentence in Danbury, CT. And in her tweet (which again, is only a tweet) Giudice seems pretty at peace: Could this message for fans signal a new, more appreciative RHONJ star? Giudice's Twitter message is the first official statement from the star since she reported for her sentence on January 5, 2015. Before that, her last tweet was a show of support for her daughter's dance group on December 23, 2014.

Since then there has been nothing other than speculation, tabloid headlines that hint at scandal, and an unmoving Twitter feed for fans to cling to. Some of Teresa's most devoted fans (who cleverly call themselves "TreHuggers") have reportedly been sending cards to the prison where the star is serving her sentence. The tweet that reality star sent out on Sunday night is a response to those kind gestures and shows nothing but gratitude for the people who have supported her the most.

Missing out on a year of her life is undoubtedly a challenge for the mother of four. That's a year of holidays, a year of birthdays, a year of achievements, and a year of family life that she is missing out. You have to wonder: will Giudice really be changed by this experience? Insiders say "yes," that Giudice is doing as well as can be expected, relying on her faith to get her through these tough months. Her attorney, James J. Leonard, recently told E! News that he thinks "she's going to emerge stronger, more focused." The reality star, he claimed, is "getting back in touch with her faith" and "spending a lot of time praying in there ... the Teresa that comes out of prison is going to wow people."

And Giudice's tweet did just that. Amidst all of the speculation, Giudice took the 140 characters not to incite more drama or start a Twitter war, but to thank the people who have supported her the most:

The tweet, one of genuine gratitude, shows a significant change from the star's previous quick-tempered ways. Here's hoping the changed Giudice continues on her path of appreciation and self-acceptance. But, let's be real: I think what we all really hope for is that she agrees to star in future seasons of The Real Housewives of New Jersey, because there isn't anyone who can flip a table better than Teresa.