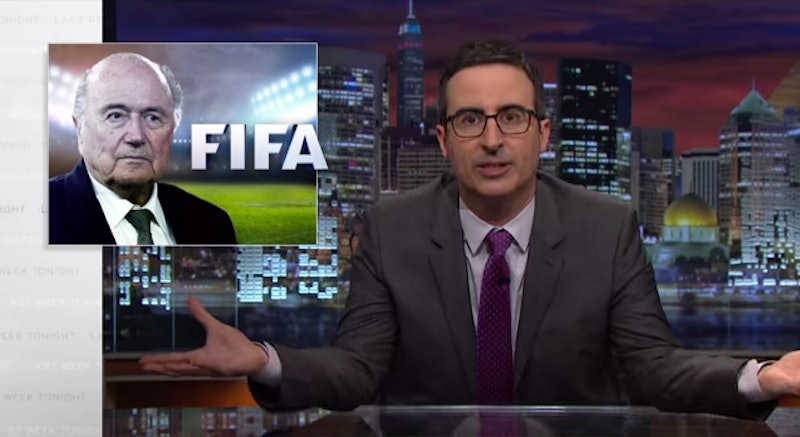 Last June, John Oliver dedicated a segment of Last Week Tonight to FIFA, the international governing body of soccer. Even back then, Oliver was incensed over just how corrupt the organization was, calling it "comically grotesque" and "cartoonishly evil" for a laundry list of reasons. Now that 14 people, including nine FIFA execs, have been indicted on charges of racketeering, wire fraud, and money laundering, Oliver is taking the organization back into the ring, this time with a renewed focus. Oliver wants FIFA President Sepp Blatter to be fired for his role in the corruption conspiracies, even vowing to go to some great lengths in order to achieve this goal.

Despite being an avid soccer fan himself, Oliver seems all too happy to duke it out again with FIFA, "the organization that sounds the most like the name of a purse dog." Perhaps it's because his investigation into the organization's shady dealings last year was completely validated last week when Swiss authorities arrested several FIFA officials for corruption. While he's not at all surprised by the arrests, he is surprised that it was the U.S. that took them down.

It took the country that cares the least about football to bring down the people who have been ruining it. That’s like finding out that Kesha arrested a group of bankers involved in commodities fraud.

Of the $150 million in kickbacks the officials are being accused of taking include expensive paintings from New York galleries, which Oliver admits is a surprisingly classy way to bribe a sports exec.

Because if you wanted to bribe Roger Goodell, all you'd really need is a cardboard box filled with old Playboys.

Oliver then singles out some of the top officials involved in the corruption indictment, including former FIFA Vice President Jack Warner, who Oliver says couldn't care less about his corruption charges. Just one day after being arrested, Warner left jail in an ambulance citing exhaustion, but just hours after that, he was dancing and giving a long speech defending himself.

Even worse, but perhaps much more hilarious? Warner made another defense on Sunday, in which he claimed that this whole corruption charge is nothing but a setup. The only problem? He cited an Onion article on FIFA as evidence.

It says something about how corrupt FIFA is that one of their ex-vice presidents could look at that story and think, "Yeah, that sounds like something they might do."

However, the real target of Oliver's story is FIFA's head honcho, Sepp Blatter, whose leadership has allowed the organization's darker deeds for 17 years. As he did in last year's segment, Oliver reiterates what Blatter is like as a human.

However, the most irresponsible decision Blatter oversaw was perhaps the decision to hold the 2022 World Cup in Qatar. Not only are the climate conditions there completely unideal for outdoor sporting events, but the number of migrant workers who have died has skyrocketed since the announcement.

All of this would lead one to think that Blatter is probably taking the biggest hit in the scandal, right? Wrong. Not only has Blatter not faced any charges but he was reelected president of FIFA for a fifth term on Friday, just two days after the organization's deep-seated corruption was revealed. Baffled, Oliver chalked it up to "a foregone conclusion."

Come on! He presided over the worst fiasco in its history! It’s like a Sony executive green-lighting a sequel in the middle of watching Aloha. "This is absolutely terrible, and I need to make sure there’s more of it. We’ll call it Aloha 2: This Time We Mean the Other Meaning."

In fact, the election system is so crooked that a few years ago Blatter ran unopposed, and this was what the actual ballot looked like:

But Oliver pointed out that they should have at least added one other option:

So in order to make any real change within FIFA, it comes down to ousting Blatter — or as Oliver puts it, "To truly kill a snake, you must cut off its head... or in this case, its asshole." And to give the U.S. authorities in charge of the investigation more incentive to find something to indict Blatter on, Oliver emphasizes how much that would change the world's view of America.

Let me put this in terms you might understand: If the Dutch somehow found a reason to extradite and lock up Donald Trump, you would think, "Holy shit, the Dutch are awesome!" That is what is on the table for you, America.