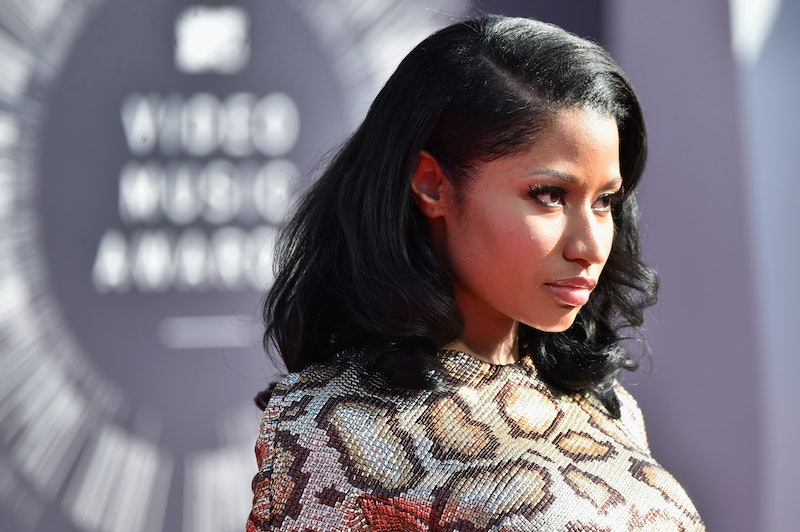 It's pretty early in the day to try to solve a mystery, but this music mogul waits for no man: Nicki Minaj is tweeting hints about some mysterious music video that she's working on. So rub the sleep out of your eyes, grab your magnifying glass, and look alive, because we have some clues to follow. Curse you, Nicki, for doing this to me on a Monday. Normally we'd have some idea of what Minaj was up to because she'd be promoting it like crazy, as is her way. But the new theme with musical artists seems to be to drop everything from their albums to their videos to their singles out of nowhere, after months of secrecy, so the game has changed. *Shakes fist at Beyonce.*

Our girl Minaj is between albums right now, having released her last one, "The Pinkprint" in 2014, so it seems highly likely that she's on-set for the video for one of those songs right now. But of course, it's not gonna be that easy, as Minaj has been tweeting and posting to Instagram all morning teasing the project, and none of the uploads seem to point to a "Pinkprint" track. But I'm getting ahead of myself, here. Let's go back to the beginning, to the tweet that started it all:

There doesn't seem to be any information hidden there, so let's check out Minaj's social media for other clues as to what the project could be.

A Remix Of "Best Thing You Never Had"

This seems to be the best guess at this point, as Minaj has been tweeting and Instagramming lyrics from the iconic Beyonce track all morning.

The Third Movie In The Barbershop Series

Seems unlikely, since yesterday's tweet said it was a video, but don't want to leave a single stone unturned, and this is definitely what she's doing today, if not yesterday.

A Collaboration With DJ Khaled And Chris Brown

Just when we thought all signs were pointing to Bey, though, she posted a photo with the caption "Ill hold u doooowwwwwnnnnn," which when it doesn't have so many extra letters is the name of a DJ Khaled track featuring Chris Brown.

A Remix Of "All Hands On Deck"

Minaj wondered if she should put the artists Tinashe and Dej Loaf on the track, which points to the song "All Hands On Deck," the last place the two aforementioned artists collaborated.

A Song About Her Breakup With Safaree Samuels

True, these are even more lyrics from "Best Thing I Never Had," but they could also be referring to Minaj's very public breakup with Samuels, whom she dated for 11 years.

A Song About Her Relationship With Meek Mill

In entirely the opposite direction, maybe Minaj is gonna give us some song-based insight into her brand new, and already extremely serious relationship with Meek Mill.

A Throwback To Her High School Years

Minaj has been tweeting a lot about her experience back then, so it's obviously on her mind. Could it be somehow related to this mystery video? I DON'T KNOW, YOU GUYS, I AM REALLY GRASPING AT STRAWS.

Give us some answers, Nicki! Please!