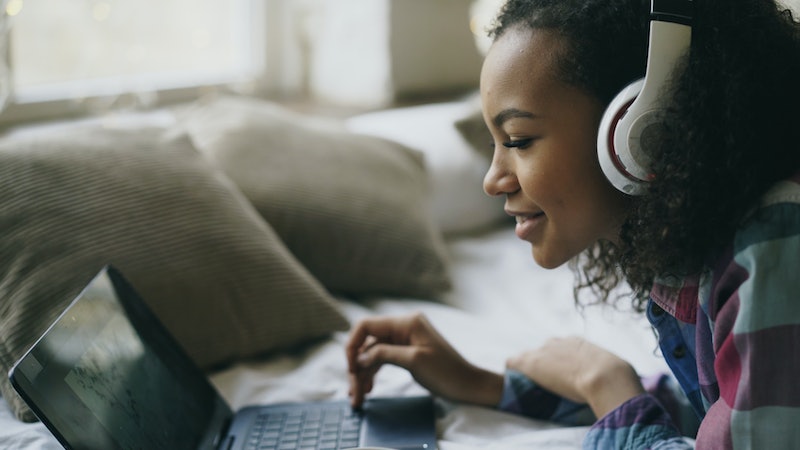 Now you have something to supplement that Food Network addiction you've been nursing since forever: a book channel. Undergraduate students at the University of Oregon's School of Journalism and Communications have created Booklandia.tv, a video channel that is all about books. And if you become obsessed with it, you can't shoot the messenger, OK?

With support from Powell's Books — the largest independent bookstore in the world, located in Portland, Oregon — students launched the site Booklandia.tv in April, with five themed sections: fiction, nonfiction, authors, humor, and a kids’ corner. The site features recorded Q&A sessions with Oregon's local authors, like William Sullivan of Listening for Coyotes, who discusses his memoir about a 1,300-mile solo hike he took through the state; and Gayle Forman, author of I Was Here, who shares with viewers some of her best advice for young writers.

Other episodes the site recently aired include a series of brief person on the street interviews, in which a student journalist asks readers, “What’s on your nightstand?”, as well as a charming episode that features one reader named Lisa asking her toddler to explain the plot of a children’s book to her (kind of adorable).

Booklandia’s newest episode is the first broadcast of a series called "Epilogue," which acts as a news-in-review show, covering everything from the discovery of Mark Twain’s early writings to the adult coloring book craze.

While still in its inaugural stages of production, Booklandia’s early episodes are definitely worth checking out. And if you’re a teacher or a student yourself, and feeling inspired to start shooting your own bookish videos, Booklandia is currently accepting submissions. Do it! Do it!