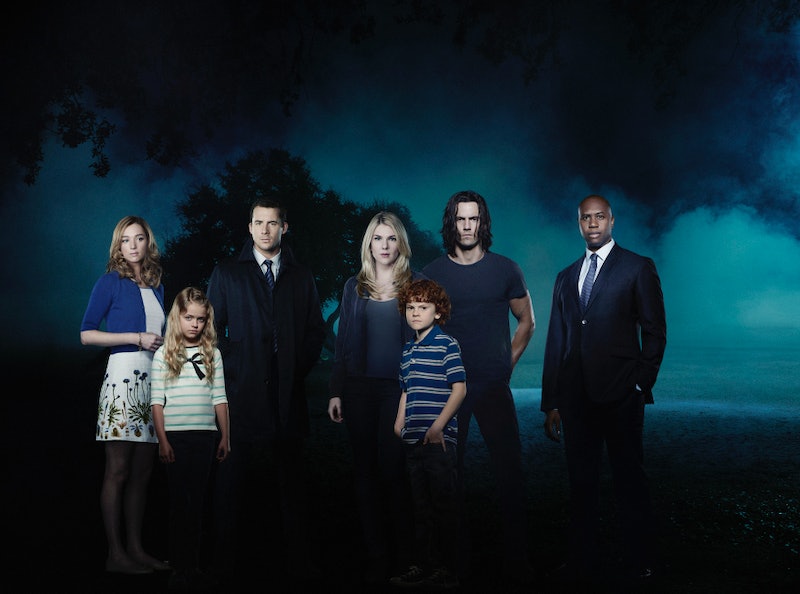 You may have gone into this show believing that children are sweet and harmless, but by the end of The Whispers series premiere "X Marks the Spot," I bet you were singing a pretty different tune. I'm just going to come out and say it: these kids are downright creepy and it's all thanks to their imaginary friend known as Drill, who plants horrific ideas into their innocent and trusting heads. But who is this Drill and what exactly are his ulterior motives? I fear we'll have to wait a while until this imaginary (and possibly extraterrestrial) foe gives us any real answers. Otherwise, what's the point in watching, right? However, we do know one very important thing. Drill is somehow connected to Milo Ventimiglia's character, Sean Bennigan.

In the last few minutes of the episode, it was revealed that Sean, fka John Doe, is actually Claire's (Lily Rabe) husband — an air force captain who was assumed dead after his plane crashed. But when Wes Lawrence (Barry Sloane) finds the aircraft at the heart of a petrified lightning phenomenon with no body in sight, Sean not only becomes a missing person, but the main suspect in his wife's latest FBI case. (Basically, things are not looking that great for Sean TBH.) Clearly, Drill's presence is directly related to his plane crash, but how? Right now he seems like a confused victim in all of this, but I think he may very well be the key to bringing Drill and his evil plans down.

Unfortunately for Sean, though, I fear the evidence is pretty stacked against him. Not only does he have tattoos of Drill's crimes drawn all across his body, but he's also been physically spotted near where all of the incidents have taken place. I mean, he couldn't look more guilty if he tried. But I highly doubt it's that straightforward. Sean knows something. He might not remember what it is that he knows, but odds are it'll prove to be a vital piece of this mysterious puzzle and help us to discover Drill's true purpose, which we know has something to do with the President of the United States, thanks to Harper's drawing.

We may not be able to actually see Drill, but as we dive deeper and deeper into this "game" that he's playing, we should be able to pinpoint his intentions — whether it be to destroy the President or all of mankind — and why he's chosen these specific children to do his bidding.