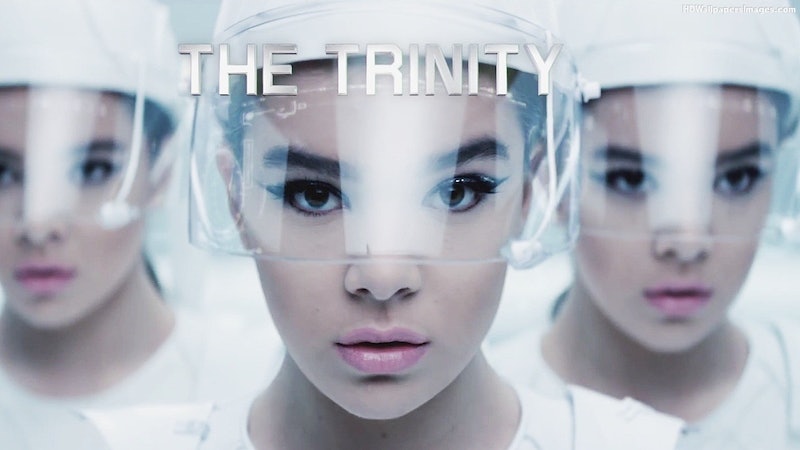 She's only 18-years-old, but Hailee Steinfeld is a name known by audiences and the entertainment industry alike. She earned an Oscar nomination for her role in 2010's True Grit opposite Jeff Bridges. In 2013 she starred in the latest Romeo & Juliet iteration as Juliet. She takes a leading role in 2015's Pitch Perfect 2 , playing the newest Barden Bella along side Anna Kendrick and Rebel Wilson. She appears in Barely Lethal with Game of Thrones' Sophie Turner. And now, audiences can see three of her as The Trinity in Taylor Swift's celebrity-laden "Bad Blood" music video.

And while seeing three of Steinfeld is an exciting prospect, we only get a few seconds of her on screen. So will we ever see a feature-length version of the music video? "Someone mentioned that to me today," Steinfeld says. "They are like, 'People want a full length version!' And I'm like, 'Of the song?' And they're like, 'No, of the video!'" she laughs.

While Steinfeld, along with Selena Gomez, Lena Dunham — and far too many other awesome female celebrities to name — appear in the video, Steinfeld is about to tackle the world of singing on her own. "I just signed a record deal with Republic Records," she says, before her voice turns to an excited squeal. "Which is so exciting! I've been working on some music that'll be coming in the next few months."

Watch the "Bad Blood" video below. Fingers crossed this isn't the last we see of Steinfeld as The Trinity.