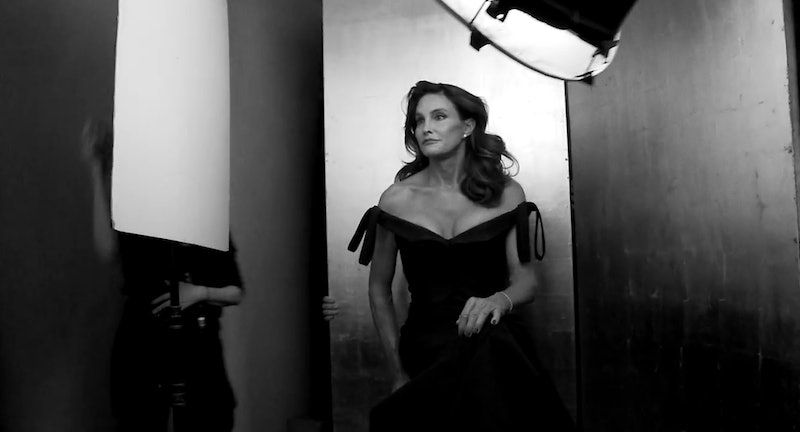 Who is she?! It's none other than Caitlyn Jenner turning heads and eliciting pearl-clutching and dramatic gasps on the July cover issue of Vanity Fair. Caitlyn, formerly known as Bruce Jenner, is the official cover girl for the latest issue of the magazine, and was photographed by legendary photographer Annie Liebovitz with a profile written by Pulitzer-Prize winning journalist Buzz Bissinger. Ever since Jenner gave a generous, brave, and amazing interview with Diane Sawyer in April, there's been a whirlwind of new information about Jenner's life, including on the Keeping Up With the Kardashians special About Bruce.

In the short behind-the-scenes video Vanity Fair released along with the new cover, Jenner speaks candidly and strongly about finally feeling free from a sense of being trapped in a lie. Amen! Summertime is the best time to let it all go and take it all off, and I'm so happy to know that Jenner is not only showing off her toned, tan shoulders, but is also finally feeling a lightness of self.

Here's what we know about Caitlyn so far, until we find out more when the full interview from the highly-anticipated and beautiful issue of Vanity Fair drops on June 9.

Though Jenner expressed a preference for the pronoun "he" during the interview with Diane Sawyer, the Vanity Fair cover shows that Jenner now identifies with female pronouns. Let's remember, friends: respecting someone's preferred pronouns is a MUST, not a choice!

2. She Looks Amazing In Retro Style

The cover is more than just a casual slay: Caitlyn wears an incredible, retro-style, Marilyn Monroe-reminiscent corset. There's also a selection of gowns and robes that are super sexy and super old Hollywood.

4. This Is About Truth & Freedom

"Every day [Bruce] always had a secret, from morning 'til night. Caitlyn doesn't have any secrets. As soon as the Vanity Fair cover comes out, I'm free," she told the magazine. I'm not crying, you're crying. And also, I am crying.

5. But Not About Regret

"I was probably at the games because I was running away from a lot of things... very, very proud of that accomplishment, I don't want to diminish it. The last few days and doing this shoot was about my life, and who I am as a person. This is about your life." And who wouldn't be proud of being a world-class athlete? Brava to Caitlyn Jenner for generally killing it in all areas of life while battling such an intense personal struggle.

6. She's Got The Full Support Of Her Family

Khloe Kardashian couldn't be more proud of Jenner's cover, and the rest of the Kardashians and Jenners have made in clear in the past that they have the back of their beautiful family member who has taught them so much. It's been encouraging to see just how much they are vocal and even aggressive about their full support and love for her, and I love and support her, too!