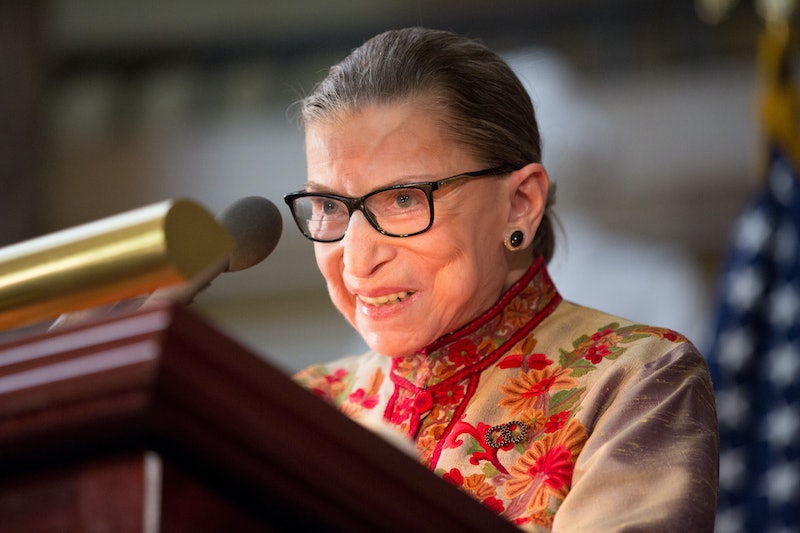 It's official: Gay marriage is now a Constitutional right everywhere in America, thanks to the Supreme Court's landmark ruling in the Obergefell v. Hodges case on Friday. While there was a majority decision of 5 to 4, there is one justice who has stood out above the rest as a steadfast and fierce supporter of marriage equality, and you might know her as the Notorious RBG. Ruth Bader Ginsburg's support of gay marriage has been crucial, from her personal opinion of the American public's shifting attitude to April's oral arguments and, ultimately, the historical decision that says anyone in any state can marry the person they love. Justices Anthony Kennedy, Stephen Breyer, Sonia Sotomayor, and Elena Kagan joined Ginsburg in agreeing that gay couples should be free to marry in all 50 states.

Even before the decisive oral arguments on April 28, Ginsburg was already very vocal about her take on gay marriage: America's ready. In February, Ginsburg sat down with Bloomberg Business to discuss the high court's impending gay marriage case. She told Bloomberg's Greg Stohr and Matthew Winkler that it "would not take a large adjustment" for the American people to accept the Supreme Court's decision to make gay marriage a Constitutional right.

The change in people’s attitudes on that issue has been enormous. In recent years, people have said, "This is the way I am." And others looked around, and we discovered it’s our next-door neighbor — we’re very fond of them. Or it’s our child’s best friend, or even our child. I think that as more and more people came out and said that "this is who I am," the rest of us recognized that they are one of us.

Then, during the hearing in April, Ginsburg used her famous sharp wit to shut down the opposing side's arguments against gay marriage. For example, when tradition was brought up as an argument to maintain the marriage status quo, Ginsburg countered with the (extremely) antiquated Head and Master Law, which defined marriage as between a dominant male and a subordinate female. Clearly, that was a marriage tradition that desperately needed to be challenged, just like opponents' idea of marriage as only between a man and a woman.

And when John Bursch, the lawyer representing the states who want to keep their gay marriage bans, argued that marriage was all about procreating, Ginsburg brought up this very astute point:

But perhaps the biggest nod she's made was when she officiated a gay wedding earlier this month, which is already a clear-cut sign of her advocacy, and she dropped a sly hint to SCOTUS's decision. According to New York Times writer Maureen Dowd, who was in attendance at the wedding of Shakespeare Theatre Company artistic director Michael Kahn and New York architect Charles Mitchem, when pronouncing the two men married, Ginsburg seemed to emphasize the word constitution when she said "by the powers vested in me by the Constitution of the United States."

Though it's nothing but mere speculation, it certainly wouldn't be totally unlike the Notorious RBG to subtly wink at America in such a way. She didn't earn her "notorious" title for nothing.