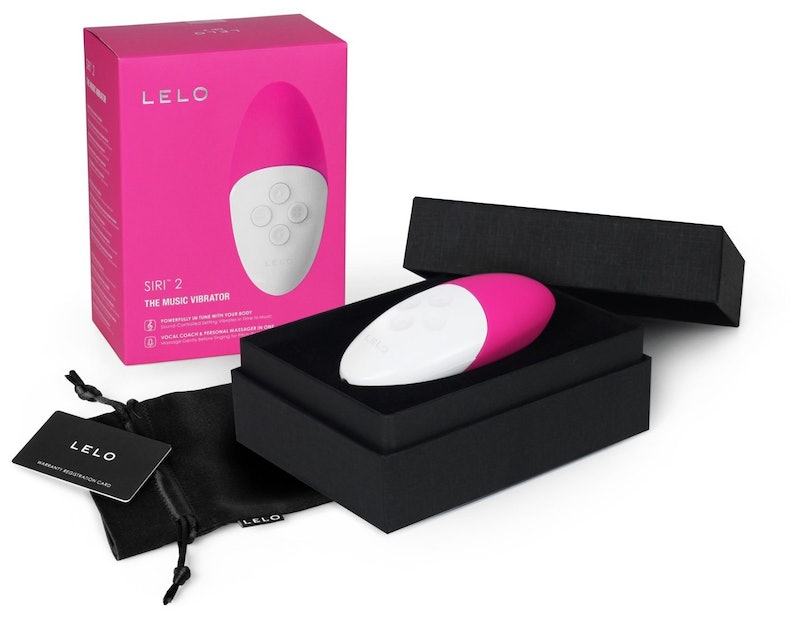 A mere hour earlier, I was a normal human being who only broke the social contract in fun, understandable ways, like jay-walking or lying about how many slices of pizza I just ate (five). This was all before I came into possession of the LELO Siri 2, a vibrator that offers a special function: a setting that makes it vibrate in time with ambient noises; allowing the device to pulse in time with the music you're listening to, the weird noises your radiator makes, or the sound of your neighbors' nightly argument about how they'll never get out of credit card debt if you keep spending money like THIS, BOBBY. You know — all the normal ways you get off.

I could see the appeal of maybe feeling more closely connected to music you liked by masturbating in time with it, and gave it the ol' college/vaginal try with my favorite album ( Raw Power by the Stooges, for those of you who want to put me on your holiday shopping lists). The sound activation didn't work in perfect sync — sometimes it buzzed a few seconds after a beat, sometimes it seemed to be responding to some invisible rhythm that I couldn't detect. Unless you jam the clam exclusively while listening to house music, it seemed like it would be difficult to have an orgasm using this setting (for the record, I tried the other, more traditional settings, and trust me, you can definitely have an orgasm for most of them).

For once in my life, I was the creepiest person walking down the block in New York. If I can make it here, I can make it anywhere, right?

In the first few moments, the stimulation felt exciting, but as I walked, I started to just feel a bit numb. I tried to subtly poke it to move it into a different position, which probably looked like I was trying to wrangle an enormous pad that had gone hopelessly rogue in my nethers. The randomness of the vibrating patterns did make it more stimulating than just steady buzzing, but surprisingly, it is hard to really relax into a sensual groove while also jay-walking and keeping an eye out for those guys who try to sell you tickets to comedy clubs.

Having my vulva massaged while I looked at rompers was indeed a great way to spend an afternoon. But I figured I would not be doing my journalistic due diligence if I did not converse with a stranger while vibrating my parts, and so I bought a shirt. I did not devolve into helpless and comical moans when I opened my mouth to talk to the cashier, though I did find it a little hard to concentrate, so I doubled down on looking serious. It was not unlike trying to have a conversation with your parents while trying to pretend that you're not drunk.

Still, walking around the store, I did find the vibrations pleasant. I still couldn't imagine feeling significantly turned on from this thing — I would compare my level of arousal to that I feel when I look at that GIF of Jared Leto's penis flopping around in his jorts — but it felt kind of nice to just walk around, doing my thing, feeling lightly sexually stimulated, but not in an invasive way. I wondered if this was what having a penis was like.