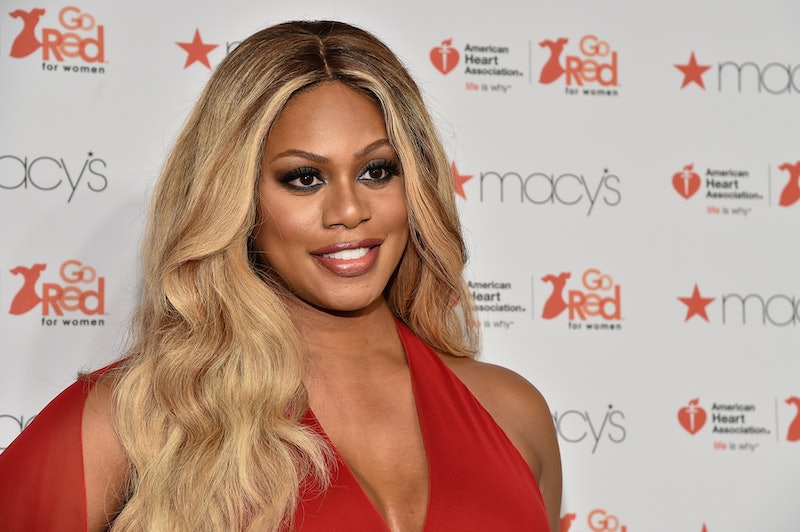 Monday marked a historic moment that will live in infamy for what I hope is a very long time. When Caitlyn Jenner's Vanity Fair cover hit the Internet, the world was shocked and then delighted. Support flowed in for Jenner as she not only graced the cover, but also joined Twitter for the first time, in order to introduce us all to who she really is, who she has always been, and who she has never before felt free to present as in public. Sure, there were some detractors, and, sure, there were some truly ignorant statements made, but, overwhelmingly, everyone gave Jenner the support, encouragement, and love that trans people could only dream of receiving from the wider public if in her position only a short decade ago. Naturally, Laverne Cox responded to Jenner's Vanity Fair cover, being, as she is, a prolific activist for transgender rights, and her essay on Tumblr made an important point that cannot be denied.

"I am so moved by all the love and support Caitlyn is receiving. It feels like a new day, indeed, when a trans person can present her authentic self to the world for the first time and be celebrated for it so universally. Many have commented on how gorgeous Caitlyn looks in her photos, how she is 'slaying for the Gods.' I must echo these comments in the vernacular, 'Yasss Gawd! Werk Caitlyn! Get it!'" However, as Cox goes on to point out, that is not the only thing that we should be focusing on when it comes to Jenner's cover, or to her life moving forward. "Yes, Caitlyn looks amazing and is beautiful, but what I think is most beautiful about her is her heart and soul, the ways she has allowed the world into her vulnerabilities. The love and devotion she has for her family, and that they have for her. Her courage to move past denial into her truth so publicly. These things are beyond beautiful to me."

And Cox is absolutely right. Among the support, among the love, and, indeed, throughout all of society, Jenner as a woman is being celebrated for her beauty as much as she is for her bravery and for her happiness. Even the most well-meaning person praising the cover cannot do so without praising Jenner for how gorgeous she looks. Comparisons to Jessica Lange were made, and Lange herself was flattered by them. The fact that Jenner is in her 60s and looking that good was another source of praise from many individuals. All of that is very important to note, of course, because the freedom to look the way that she does on this cover is one that Jenner has been denied throughout most of her life. As Cox said, "Werk, Caitlyn! Get it!"

"A year ago, when my Time Magazine cover came out, I saw posts from many trans folks saying that I am 'drop dead gorgeous,' and that that doesn’t represent most trans people... But what I think they meant is that, in certain lighting, at certain angles, I am able to embody certain cisnormative beauty standards. Now, there are many trans folks, because of genetics and/or lack of material access, who will never be able to embody these standards. More importantly, many trans folks don’t want to embody them, and we shouldn’t have to to be seen as ourselves and respected as ourselves."

Essentially, as Cox rightfully points out, not every transgender woman is going to walk out of their house looking like Jessica Lange the moment they decide to formally introduce their real selves to the world. Not every transgender woman is going to look like Laverne Cox ever. And there are many transgender women who don't even want to adhere to such cisnormative standards in their quest to be accepted for who they are. Cox and Jenner represent positive role models for the transgender community, whose bravery in sharing her journey (Jenner) and outspoken activism on transgender issues (Cox) are an inspiration and that give visibility and a voice to traditionally marginalized people. But there is still a very long way to go before widespread, mainstream acceptance can be achieved, and we shouldn't stop fighting to help the transgender community achieve that acceptance even now that a woman like Caitlyn Jenner can make the cover of a magazine like Vanity Fair and have the world celebrate her for it.

"I have always been aware that I can never represent all trans people. No one or two or three trans people can. This is why we need diverse media representations of trans folks to multiply trans narratives in the media and depict our beautiful diversities. Most trans folks don’t have the privileges Caitlyn and I have now have. It is those trans folks we must continue to lift up, get them access to healthcare, jobs, housing, safe streets, safe schools and homes... We must lift up the stories of those most at risk... I have hoped over the past few years that the incredible love I have received from the public can translate to the lives of all trans folks. I hope, as I know Caitlyn does, that the love she is receiving can translate into changing hearts and minds about who all trans people are as well as shifting public policies to fully support the lives and well being of all of us."