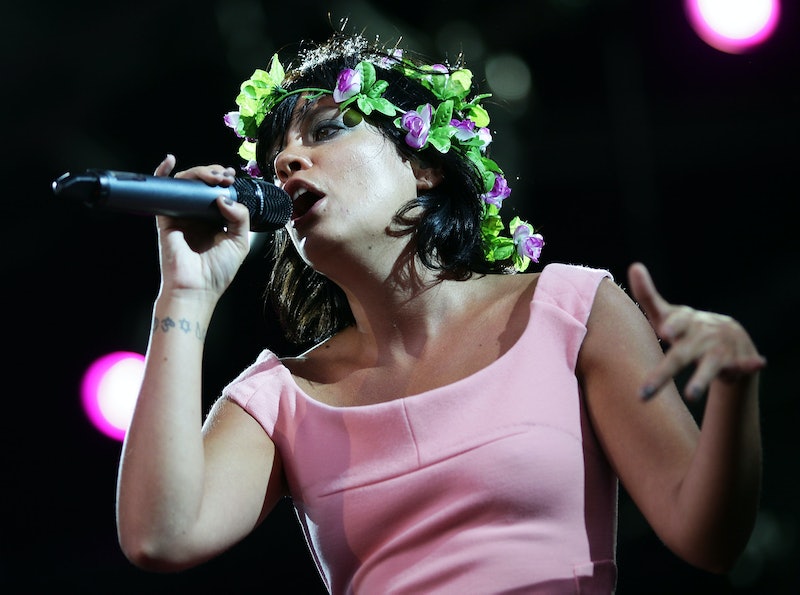 God, we've missed you, Lily Allen. England's outspoken songstress has never been one to mince lyrics and her new song "Hard Out Here" is no exception. Forgoing the safe cover of metaphors and innuendos, Allen always goes straight for the jugular: her seemingly cheery introduction to pop music was, after all, a bubbly song in which she professed to a cheating ex-boyfriend that "At first when I see you cry/ It makes me smile/ Yeah it makes me smile." Now, Allen has taken that same frankness and turned it into music video gold (below) in a scathing visual and aural take-down of the misogyny rampant in pop music and celebrity culture in general.

But it's not a simple girls rule, boys drool sort of message like Beyonce's lady anthem "Run The World (Girls)" — its lyrics are classic, but simple — instead, Allen ruthlessly attacks the rampant disparities between the sexes in popular culture. Sure, progress has been made, but as Allen points out in her lyrics, if we think the playing field has been leveled completely, we're wrong.

Allen sings "It's hard out here for a bitch" and "forget your balls and grow some tits," and while it probably won't fix the problems rampant in our culture, it's given us a catchy anthem for remembering that they're not permanent and a few grade-A targets for change.

Allen, who have given birth twice, has returned to pop music, but she's not going to put up with any commentary about whether she's miraculously snapped back into her original body shape or "let herself go" because of kids. When the video opens, she's on an operating table as doctors suck fat from her stomach and thighs while her ugly, old white guy manager tells her she's not booking gigs, but it will all get better once they fix her body. "I had two babies," she reasons. But the doc and the manager are too busy talking about her as if she's not there, suggesting that "some women lack discipline." Huh, kind of sounds like a series of articles about Jessica Simpson after she gave birth and failed to fit back into her old Daisy Dukes, doesn't it?

Of course, my personal favorite in her many preemptive responses to the "Is this celebrity lady still attractive after giving birth?" questions is the fact that she hops off the operating table and into numerous scenes in which she dons skin tight clothing, hugging her new shape in amorous appreciation. Yeah, she had two babies and yeah, her body looks different, but she's still got that sexy brain of hers, and she looks damn good that leather top, if I do say so myself.

The most buzzworthy criticism in "Hard Out Here" is the brief commentary on Robin Thicke's video for "Blurred Lines" which features topless women who also suggestively place the ridiculously phallic Beats Audio Pill speaker near their open lips. Allen's video goes the extra mile and straight up has one of her ironic video vixens fellate the speaker while Allen's awful manager tries to teach her to fellate a banana to sex up her music video. Rest assured, Mr. Thicke, that whatever your models did with the Pill looked just as ridiculous.

Of course, this isn't just about Thicke — he wasn't the first to make a sexist music video and he certainly won't be the last — so Allen includes women with nearly-bare voluptuous rear ends shaking them in terrifying slow motion like every rap video vixen who came before them while her classless manager tries to get her to follow suit. Again, all this does is make it obvious how ridiculous these supposed music video staples are.

3. This is the Real Reason Celebrity Pregnancy Freaks Men Out

I once had a male coworker explain to me (at work, of all places) that the reason men get upset when hot actresses or singers become pregnant is that men's minds immediately imagine the "damage" childbirth does to a woman's vagina, as if the condition of said body part had anything to do with these men or anyone they'd ever actually get to sleep with. What this signaled to me (especially as many of my other coworkers nodded in agreement) was that even when men are smart enough to know women shouldn't be seen as sex objects, some men can't help but reduce them to little more than a place to put a penis.

To that, Allen has a rebuttal as well, Robin Thicke-style:

This one really needs no further explanation, but if you see Lily Allen please let her know I'd like to give her a hug.

One of the common mistakes of women aiming to elevate the status of their fellow ladies through art, song, speech, and even tweet, is that some find it way too easy to take down other women as they take down the larger world issues that plague women's progress. Allen is no such woman.

While she takes blatant aim at the objectification of women in music and elsewhere and makes specific reference to artists like Thicke, there is no room for anti-Miley rhetoric in her video. Whatever your opinion on Cyrus's antics, we can all appreciate the lack of woman-on-woman crime in Allen's brilliant video.

UPDATE: I have read, and am very aware of the theories that suggest the use of four black women dancers (in addition to two white dancers) is a method of trashing Cyrus for her common misappropriation of black culture since the MTV Video Music awards. I do not discount those who view this video that way, but I do offer an alternative viewpoint: another interpretation could be that the video is a critique of music videos that objectify women in general — much like Thicke's video, which is a hybrid of R&B and rap music and includes numerous models being objectified. In fact, Allen just made this point herself, via Twitter.

I understand that some people may interpret this video as the objectification of women of color, specifically, and I respect those opinions, even if that was not my initial interpretation of the video. In the end, I believe Allen was aiming to crush sexism in every corner of the industry and for every woman in the industry, which is why I found cause to applaud her.