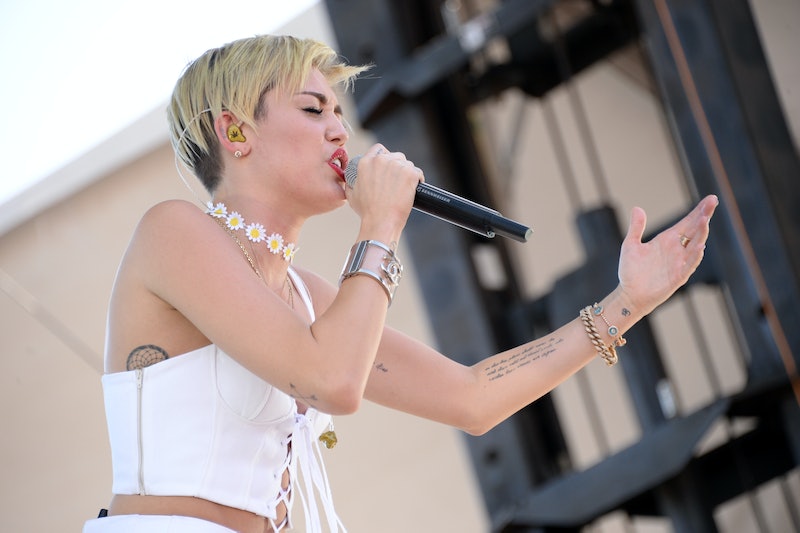 Celebrity feuds, pregnancy rumors, and dating revelations are the cornerstones of celebrity gossip, which is why when Bangerz singer Miley Cyrus began responding to Sinead O'Connor's problematic open letter regarding Cyrus' recent behavior, the whole of the Internet flocked to read all about it. By now, O'Connor has released three letters and Miley has thrown at least three Twitter digs, begging the natural question: Which side is right? The problem is that in a feud as immature and uninformed as this one, absolutely no one wins — not the singers throwing barbs, not the impressionable young people watching it go down, and not those of us who can't get enough of the drama. Right now, we are all losers.

Yes, O'Connor has made some rash accusations, and Cyrus is fully within her rights to respond. The crux of the '90s singer's first letter suggested that Cyrus has no control over her own career, when in fact, the reason the "Wrecking Ball" singer is so controversial is that she has complete control over her own career at the tender young age of 20. So when O'Connor asserts that "the music business doesn't give a shit about you, or any of us. They will prostitute you for all you are worth, and cleverly make you think its what YOU wanted," it's insulting to Cyrus and to other women in pop music.

O'Connor suggests that no matter how many times Cyrus makes her own decision, it's actually a grand construct set in place by some man in a corner office. But something tells me "twerking on teddy bears" isn't something that came down from the business powers that be. That's all Cyrus. True, the music industry does pressure women to fit into the appropriate sexy box — Britney Spears admitted Thursday that she's felt such pressure to play the vixen — but for every half-naked sexpot, there's a successful singer like Adele or Florence Welch who are sexy in their own rights without prancing around naked or gyrating on construction equipment. To assume that the music industry is a place where women are all being forced into sexpot slavery is a narrow and wildly unproductive viewpoint.

Naturally, Cyrus responded. But when Cyrus made the poor decision to ignite this fight instead of letting it go, she didn't legitimize O'Connor's concerns. She didn't prove that O'Connor clearly needed to write two more letters to really set this girl straight. She proved that she's more concerned with looking like a bad bitch than she is with actually being right. Again, no one wins. Cyrus tweeted, mocking Amanda Bynes, O'Connor, and mental illness before adding that she didn't have time to write an open letter back because she was too busy hosting SNL. Cyrus also added that she'd be happy to speak to O'Connor in person, rather than throw barbs back and forth in a public arena, perhaps finally realizing just how toxic this back and forth had become. That being said, she still offered a public invitation, just inciting more drama and reaction from the Sinead side of the fence.

After calling Cyrus a "prostitute" in her second letter, O'Connor uses her third (yes, third) open letter to defend women in the industry, saying Cyrus' mental health jokes were "anti-woman" and that "[Miley] ought to apologize for joining those who mock and humiliate women who have been too nice frankly, [sic] to manage the industry without sensibly losing their minds." Certainly, this issue is one close to O'Connor's heart. In the wake of her 1992 SNL performance (in which ripped up a photo of the Pope), O'Connor was deemed unstable and by some less sensitive folks "crazy." Clearly, she's sensitive to callous commentary on mental illness in the entertainment industry. And she has every right to be.

But suggesting that this back and forth is somehow a feminist issue, elevating her own wayward commentary to an educated and legitimized level is not right or healthy for those watching this feud unfold. Calling another artist a "prostitute" because of her choice of wardrobe, suggesting that because an artist's choices are sexual that they're automatically being exploited, and that performing naked suggests that an artist has no self-worth are not the hallmarks of a true feminist. They are hallmarks of a self-righteous bully, and so are Cyrus' Twitter responses. There is not a single good aspect of this exponentially growing story. It's all completely toxic.

The fiery back-and-forth highlights the rampant issue of women fighting for equality and respect by taking down other women rather than the societal roadblocks that make the fight necessary in the first place. It's something singer Amanda Palmer picked up on and chose for the basis of her open letter in response to O'Connor:

...women need more freedom to say what they want (double entendre [sic] there), express what they want (same) and be respected for their bravery, not reprimanded for endangering themselves ... let's give our young women the right weapons to fight with as they charge naked into battle, instead of ordering them to get back in the house and put some goddamn clothes on.

Palmer hits the nail completely on the head. It's understandable that O'Connor has been riled by Cyrus' sexpot ways — that's the very deliberate point of Cyrus' actions, as she expressed in her MTV documentary. It's understandable that Cyrus and O'Connor were hurt by the other and felt the need to jump to their own defense. But when a respect-bereft conversation like this becomes a national conversation, we are all in deep trouble.

These two singers are promoting the rampant issue of women judging other women, but when we gawk at every turn, we are, in turn, promoting their conversation and taking on the burden of judgement ourselves. This is what happens when we judge other women for something as superficial as licking a sledgehammer in a music video: The most talked-about women in the media right now are newsworthy for being catty, judgmental, and short-sighted. And it is helping absolutely no one.

So I beg of all of us, rather than continue to assess the impact of each singer's swing at the other, and rather than making this public conversation a spectator sport, let us assess this as a dark moment in the music industry and use it as a learning experience. Let us not give this conversation, or conversations like it, any more weight. In the end, we're only hurting ourselves.