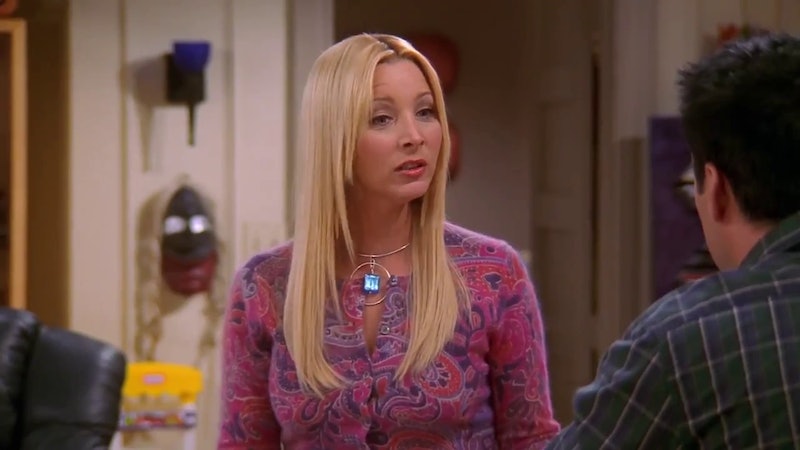 By now, I’ve probably seen every episode of Friends about 100 times, but I’ve never written out a list of Phoebe’s boyfriends before now. So, let me tell you something: Friends’ resident weirdo Phoebe Buffay is a baller. I mean, girl married Paul Rudd. I went through and picked out all 31 of her men and ranked them from the worst to best, and I think you are going to agree with me when I say that Phoebe has some major skills in the art of picking up men. She might be able to give Joey a run for his money.

Now, before I get started, let's consider that there are two kinds of Friends fans: There are people who watch Friends when it’s on TV and there are the people who fall asleep to the show at night, can quote every word and know some of the most obscure details. Can you guess which one I am? I made this list for the truly devoted fans because we need to know where Phoebe's guy who eats chalk falls on the list. (Plus, we can't never leave out her secret affair with the guy who’s got the pigeons on the roof.) When you write about Friends, you'd better know every detail.

Here are all of Phoebe’s men from worst to best:

Vikram is Phoebe’s fictional boyfriend. He’s a freelance kite designer, but on the downside he’s a glue sniffer. Please take notice that I put a fake person after Jim Nelson, because that’s how terrible Jim was.

This guy somehow convinced Phoebe that he was actually Ralph Lauren just so he could make out with her. Also, long hair, a beard, and a hacky sack, Kenny? Ick.

"I hate that guy!" No one should ever date a psychoanalyst who analyzes your friends.

For obvious reasons. We never see the guy who eats chalk, but Phoebe refers to him in the very first episode because she doesn't want Monica to go through what she went through with Carl.

Phoebe meets Tim the Sous-Chef at Monica’s restaurant and even though she was excited to get “sous-neath” him, it turns out he’s kind of needy and obsessive. Nothing is worse than someone who calls a million times to make sure you’re OK.

“I must take a mental picture! Click!” Parker is the annoyingly positive guy that attends the Gellars' 35th anniversary party with the gang and pretty much loves everything and thinks everything is magical. No one likes someone who is that optimistic 100 percent of the time. Not even Phoebe.

He may be charming, but when you hear your guy hooking up with someone else... well, that sucks.

Ah, The Stalker. Malcolm thought he was stalking Ursula, but it turns out it was Phoebe. Naturally, he and Pheebs start to date, but she quickly learns Malcolm couldn’t drop his stalking ways. Wake up and smell the restraining order, girl.

Phoebe slept with Jason one hour after Monica broke up with him. Kind of a jerk move on both Phoebe and Jason’s part.

If you can’t spell his name you shouldn’t date him. That’s a rule.

In Season 2, Phoebe is dating a guy named Scott (who we never actually see). What’s Scott’s problem? He won’t put out. So he manipulates Phoebe into begging him to sleep with her and saying he never has to call her. Yet, he’s still better than Parker and Tim. Yikes.

Phoebe totally let him wash his feet in the pool of her inner power... and his puppet too!

First Eric is engaged to Ursula and then he broke up with her and tried to date Phoebe. I liked Eric at first because he was a 2nd grade teacher, but then he slept with Ursula again thinking she was Phoebe... and that’s gross. Get it together, Eric.

In Season 1, Chandler and Phoebe agree to break up with Tony and Janice together. Why does Phoebe break it off? “It’s just not fun anymore, you know? I don't know if it's me, or his hunger strike.” Definitely the hunger strike.

Larry was the food inspector who kept shutting down all their favorite restaurants. That would literally be my nightmare. See ya, ladle Larry!

Phoebe gives her little black book to Rachel in Season 9. Her past boyfriends include Guy-In-Van (her first love), Pablo Diaz, Brady Smith, Bob Greenmore (died in the first wave at Omaha Beach) and Jethro Tull (the whole band, Phoebe?). I have to assume that a few of these dudes are better than the previous ones I listed.

14. The Guy Who Keeps The Pigeons On The Roof

Let’s not forget about Phoebe’s “secret affair” with the guy who keeps the pigeons on the roof. He sounds like a disaster.

Oh, No-Underwear-Guy. He was active and played sports, which was nice, but his pants were loose and his junk was constantly on display. Hey buddy, put the mouse back in the house.

This is the guy who wore Phoebe's underwear. Hey, he’s above Robert, because at least he wears underwear.

Sergei was cute and definitely had the whole power politics role down. But, one problem: His translator kept ruining their dates. Oy! At least she learned “American Pie” in another language.

Rob was actually not bad. He hired Pheebs to sing songs to the children in the library because he loved her voice. Then Phoebe sang songs that were just too real. She didn’t take it well when he told her the parents were complaining. Their breakup is pretty much Phoebe’s fault.

Another perfectly decent guy who we briefly met. While Rachel was off having Emma, Phoebe met Cliff, who was a patient in the hospital. Unfortunately, she screws it up by sending Joey in to ask him personal questions. He was cute and nice though. I give him the benefit of the doubt.

Also known as Kyle. Hums-While-He-Pees starts dating Phoebe and his ex-wife begins to see Ross, which puts our Friends in the middle of the divorce. I think Kyle could have been a great guy, if the timing was better.

Remember The Marine who works on a submarine? Ryan resurfaces every couple years and Phoebe hooks up with him. Unfortunately, they both got the chicken pox when he showed up and, while it wasn’t super romantic, they got to play a lot of Monopoly.

Duncan thought he was gay. Then he realized that he wasn’t. Phoebe didn't take this so well.

Before Gary The Cop shot and killed a bird he was actually a great guy. They were super into each other and even though Gary was moving fast, they were cute together. Even Chandler thought so.

Vince has the body and the whole sensitive thing going on too. Plus, he’s got 98 hot saves, the highest in the force. “It’s really just about the math,” as Phoebe would say.

Jason over Vince any day of the week. A kindergarten teacher with that body? That is unreal and someone you date forever and ever.

Aw, David the scientist guy tried so hard to be a good guy. If Mike never came into the picture, David totally deserved to end up with Phoebe. It was kind of nice that they were always on and off and missing each other just by a little bit throughout the series. They should have done a flash forward episode showing what could have happened if David hadn’t gone to Minsk. Only annoying thing: It took him an hour to get a sentence out.

Not only is Mike Hannigan the best of all the men Phoebe dates, but he’s the best guy on the show — hands down. It’s so adorable when he plays the air piano for her, calls her “wonderfully weird,” and proposes to her four times. It’s even cute when he epically fails at dirty talk on the airplane. I hope that if there is ever a reunion, Pheebs and Mike show up with a pack of singing children like the Von Trapp family! Plus, it doesn't hurt that he’s played by Paul Rudd.

In the end, Phoebe figured out this whole dating thing. You go girl.