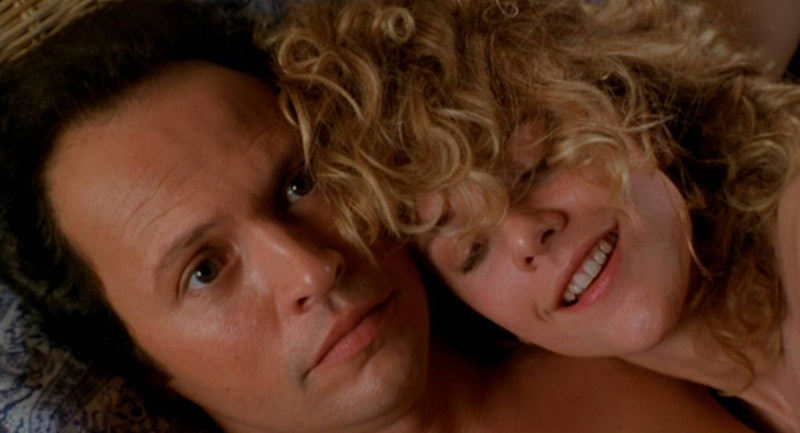 All sorts of absolutely unnerving things can happen in our dreams, but sex dreams about your friends, co-workers, and/or other folks who occupy thoroughly non-romantic places in your life can be among the most upsetting. I mean, how could a nightmare about getting chased around by some doofus with knives for hands compare to the true horror of dreaming that you and your best friend are covered in lube and riding a sex swing together? And sex dreams can do more than just make our next IRL meeting with our dreamland partner uncomfortable. They can drive us nuts, as we struggle to figure out why we had a sex dream in the first place. What does a sex dream about a real person (who's not your real partner) mean? Does it mean that you want to wax their tadpole in real life, too?

Thankfully, it does not. Sex dreams do not necessarily have any correlation to real-world sexual desire. Sure, we may have the occasional wish-fulfillment sex dream about someone we're genuinely attracted to, like a rock star or a notable barista. But sex dreams don't typically mean that you harbor a secret lust for your dream partner's loins. More often, sex dreams are about the desire to integrate a certain aspect of another person's personality into ourselves — say, a friend's compassion, a boss' poise, or a co-worker's excellent pinball skills.

So there's no reason to worry that your relationship is on the rocks (or that you're secretly attracted to Ned from Accounts Receivable) just because you shared a night of passion with someone else while you were asleep. Here are five of the most common people you'll have dream-sex with, what dreaming about them might mean, and why you totally shouldn't freak out that you dream-saw them dream-naked.

Sex With A Friend

Sex dreams about friends are a horror that plague almost all of us, but they're seriously nothing to worry about. Dreaming about having sex with a friend can actually be a reflection of the level of closeness that you feel with that friend. It can also mean that this person has a trait you'd like to make a part of yourself. (I mean, of course they have tons of awesome qualities — that's why they're you're friend, right?) So don't sweat friend sex dreams, but don't be the weirdo who tells your friend about it. That is literally never something that you want to hear over brunch.

Sex With Your Boss Or Coworker

Some experts say that boss sex dreams are the most common form of sex dream, but you don't need an expert to tell you that they're certainly among the most annoying. There you are, jamming the clam or pruning the trouser tree of the person who signs your time sheets, and you're supposed to just go to work the next day like it never happened?

But sex dreams about your boss have to do with your own leadership qualities, not a desire to fondle your boss's Reese's Pieces. They typically mean either that you see leadership abilities developing in yourself, or that you'd like to cultivate them further. The same generally applies to sex dreams about co-workers who aren't also friends. Maybe you're in the middle of getting psyched to start taking your career more seriously, or are beginning to push yourself to go after your professional goals. You're feeling more empowered and in charge of things. No matter how you slice it, it shouldn't make you feel shy over the copier the next day (even if you boss did a really weird sex move in your dream with a top hat and a box fan).

Sex With Your Secret Crush

Though it's hard to dismiss a sex dream about a crush as totally nonsexual, there can be a nonsexual element to it. You may be having the dream because your crush has a personal quality that you wish you had. Honestly, aren't half the crushes out there about them having some cool quality that you'd secretly like to possess yourself? (The other half are about cool shoes.)

Sex With Your Ex

Ugh, this one. The fact that you can still have sex dreams about an ex whom you loathe is one of the least fair things about a breakup. But when you have a sex dream about an ex, your brain isn't really focusing on that ex as a person. Rather, your mind distills your ex to a single trait — something that played a prominent role in your relationship — and is alerting you to its presence in your life. It could be a good one, like kindness, or a more questionable one, like an inability to stop making sweet love to strangers you meet at the mall food court bathroom. But either way, it's present in your existence. Is it showing up in your new partner? Is it turning up in yourself? An ex sex dream is always a good excuse to stop, take inventory, and make sure things are going the way that you'd like them to.

An ex sex dream can also be about fears when starting a new relationship — will this end like my last one? — and processing unfinished feelings about your former lovah.

Sex With A Stranger

Who was that mysterious stranger? You know, the one who was just banging you? When a phantom sex partner shows up in your dreams, don't get alarmed. It may just mean that you feel uncertain about the near future. More positively, the sexy stranger may represent aspects of yourself that you're interested in exploring — like mysteriously appearing in the dreams of strangers and then having sex with them. (Hey, wait a second ...)