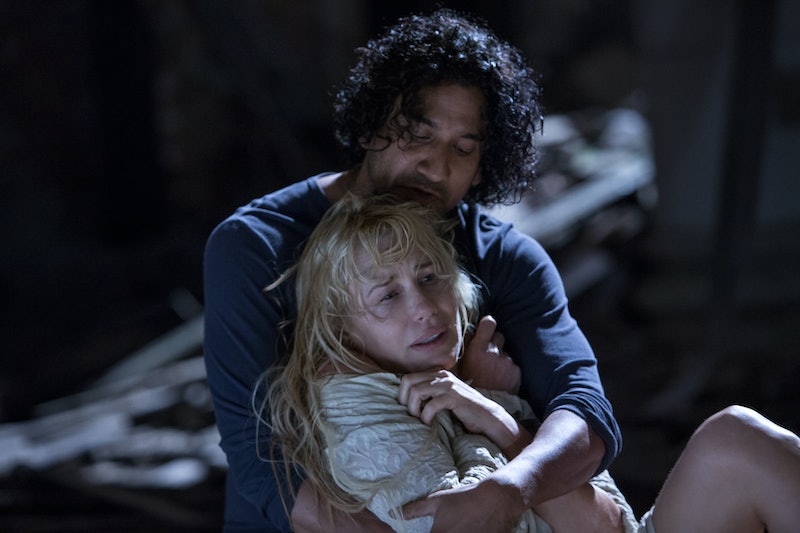 "You are no longer just you. You have seven other selves." That's the line that repeats in the trailers for Sense8, the new Netflix series from Lana and Andy Wachowski. It is spoken by a character caled Jonas, played by Naveen Andrews, best known as Sayid from Lost. Besides his soothing voice and hair that won't quit, will Naveen Andrews' character on Sense8 be anything like Sayid?

Sense8 is about a group of people, eight of them in fact, who discover that they are "sensates" that share a common consciousness. Not only that, but they are being hunted by a former sensate who turned against the sensate cause. Have I used the word "sensate" enough? Personally, this show is sounding more like Orphan Black to me than Lost. It also seems as if this show is taking a page from the original Star Trek, in which an international (and interplanetary) cast of characters worked together for the greater good.

So who is Naveen Andrews' character? We don't know too much about Jonas, but he is the character who connects the sensates by appearing to them and helping them. According to a Buzzfeed exclusive, Jonas is also a sensate himself, and comes from another cluster that formed the current cluster and "guides the eight new sensates toward answers." New clusters are formed when a member of a previous cluster dies — just like slayers on Buffy.

If I were to compare Jonas to a Lost character, I would say Richard or Jacob. He's the Morpheus/Gandalf/Nick Fury of this series. However, that doesn't mean I can't get excited to see shades of Sayid Jarrah on my television again. Here are a few ways that Sense8 could make that happen.

Shannon and Sayid wasn't my OTP on Lost, but I still get feels thinking about their short-lived relationship on the show. His star-crossed relationship with Nadia was even more tragic. Hopefully sensates have time to fall in love.

Remember the season when Sayid was working as an assassin for Ben? Oddly enough, this is the aspect of Sayid that Jonas reminds me most of in the world of Sense8. He's a jetsetter, he just murders people instead of mentoring them.

As Sayid learned, you never know when the ability to repair a radio, pilot a helicopter, and read a map is going to come in handy.

A Lot of Fighting Skills

Sayid killed a man with his legs, need I say more? If people are coming after the sensates, he's going to need to have a decent toolbox, whether it be metaphorical or physical.

An Understanding Of People

Sayid was an interrogator, and learned how to read people. I would assume that sensates need to understand human expressions and interaction just as well, if not better.

Sayid was never a flat character on Lost. The show really delved into what made him a killer and whether or not he'd ever be able to change. While the show seems to be focused on the new cluster of sensates, I hope we delve into Jonas' past as well. Whether it bares any resemblance to Sayid Jarrah or not, it's sure to be interesting.