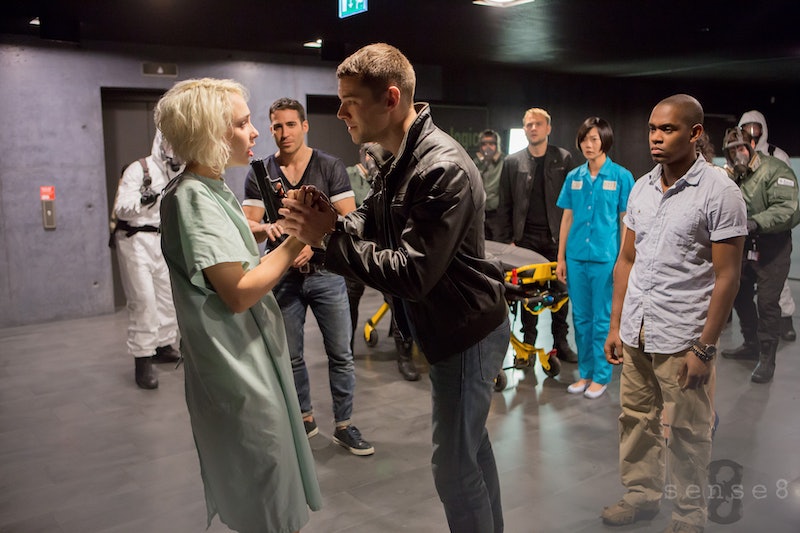 Netflix is on a roll these days, churning out original shows faster than you can say "67th Annual Primetime Emmy Awards." The first four months of 2015 already saw the acclaimed releases of Unbreakable Kimmy Schmidt, Bloodline, and Daredevil — and the ensuing summer months will see four more premieres: the Jane Fonda, Lily Tomlin comedy Grace And Frankie, the mysterious supernatural drama Between, the revival of cult classic comedy Wet Hot American Summer, and the brain-teasing sci-fi series Sense8 from the Wachowski siblings, creators of The Matrix. (Not to mention Season 3 of Orange Is The New Black !) It's the Wachowskis' new project that has me most intrigued, however — it's their first foray into television and it has, if possible, the most mind-bending concept they've tackled yet.

According to Netflix's press site, the plot of the trippy series can be described (cryptically) as follows:

Sense8 is centered around eight characters that live in different cities around the world who experience a violent vision, and soon find themselves mentally connected by this experience. They are suddenly able to see and talk to each other as though they were in the same place, and have access to each other's deepest secrets. Not only must these eight adapt to this new ability and to each other, they must figure out what happened and why and what it means for the future of humanity, while being hunted by an organization out to capture, kill or vivisect them.

We can glean some more details from the trailer that just dropped Thursday. First of all, the show is going to look gorgeous. Each of the eight main characters lives in a different part of the globe — Berlin, Chicago, Mexico City, Mumbai, Nairobi, Reykjavik, San Francisco, Seoul — meaning we'll get lots of beautiful and varied location shoots. Also, it seems that the "sensates" being "mentally connected" has basically turned them all into superheroes. Since they all share a brain, they each have access to what the others know, feel, and can do. If one of them speaks Spanish, they all speak Spanish; if one of them knows martial arts, they all know martial arts.

Before we get to the trailer, first meet the cast of Sense8. The eight main characters are all relative unknowns, although the three main recurring roles are filled out by recognizable faces:

Who he plays: A bus driver from Nairobi who possesses a strong sense of both compassion and justice.

Who she plays: A pharmacist in Mumbai who's both a woman of science and a woman of faith.

Where you've seen her before: Her only English-language credits are both Best Exotic Marigold Hotel movies, where she plays Dev Patel's girlfriend, Sunaina.

Who he plays: A popular — and closeted — Mexican actor.

Where you've seen him before: This is also his English-language debut, although if you're a Pedro Almodóvar fan, you may have seen him in 2013's I'm So Excited.

Who she plays: A transgender San Francisco blogger. (Above right.)

Where you've seen her before: The real-life transgender actress had a recurring role in Season 3 of HBO's Hung, and also co-hosted the VH1 makeover show TRANSform Me.

Who she plays: A hard-partying DJ from Iceland.

Where you've seen her before: She had a small role in last year's Oscar-nominated film The Imitation and previously worked with the Wachowski's in this year's Jupiter Ascending, where she played Kalique, the sister to Eddie Redmayne's villain Balem.

Who she plays: A Seoul businesswoman who also happens to be proficient in martial arts.

Where you've seen her before: She was one of the main characters in Cloud Atlas — the Wachowski film that most closely resembles Sense8 — where she played the revered Sonmi~451, among several other roles. (She was also one of the stars of the severely underrated Korean monster movie The Host.)

Who he plays: A police officer from Chicago. (Above left.)

Where you've seen him before: A series regular on the 2009 Syfy drama Stargate Universe; a recurring role as Max Harding in Season 5 of Gossip Girl; guest parts on the likes of The Good Wife, Person Of Interest, and Blue Bloods; in the role of Gentlemen Caller in 2013 Broadway revival of The Glass Menagerie, which earned him a Tony nomination for Best Featured Actor in a Play.

Who he plays: An expert safe-cracker operating out of Berlin.

Where you've seen him before: This is also his English-language debut, although his film credits in Germany number almost 50.

Who he plays: The enigmatic figure who shepherds the sensates.

Where you've seen him before: As the fan-favorite character Sayid on all six seasons of Lost. Since then, he's also appeared as Jafar in the ABC spinoff Once Upon a Time In Wonderland.

Who she plays: Someone who "has to [make] sacrifices for what she wants to protect."

Where you've seen her before: Most famous for her role as a mermaid in the 1984 Tom Hanks romcom Splash, she was the queen of the '80s, also appearing in Blade Runner, Wall Street, Steel Magnolias, and Crimes And Misdemeanors. More recently, she played Elle Driver in both Kill Bill films.

Who he plays: The show's villain, who's hunting down the sensates.

Where you've seen him before: Although you may have seen him on screen in the likes of A Chorus Line or Critters or 30 Rock, Mann is mostly known as an accomplished stage actor, having appeared in numerous Broadway productions over the years (including Cats, Les Misérables, Beauty And The Beast, The Rocky Horror Show, The Addams Family, and Pippin) for which he's earned three Tony nominations.

And now, check out the trailer before all 10 Season 1 episodes drop on June 5: