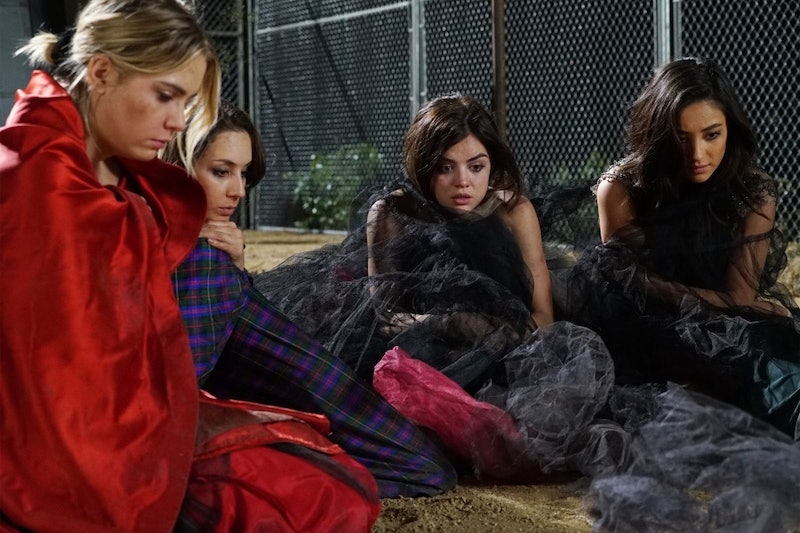 Fans have spent months preparing for the Season 6 premiere of Pretty Little Liars. We've been obsessively re-watching Season 5 for missed clues, combing the web for every possible theory, dreaming in anagrams, and reading into every cryptic clue offered by the stars during interviews. When the premiere day finally arrived, I was so happy I wanted to break out into Emily-and-Hanna-style dance moves (but I didn't have time, because I realized ABC Family was airing a marathon of Season 5B).

We've been promised the darkest season yet, and if "Game On, Charles" is any indication, I. Marlene King is prepared to make good on her word. In true Pretty Little Liars fashion, we were given a few answers and left with far more questions (including, but not limited to: how many of those ruffled yellow tank tops exist in Rosewood? And how is Spencer's Etch A Sketch game so strong?).

Pretty Little Liars fans are nothing if not devoted (and perhaps a tiny bit obsessive) and everyone from the book series' author Sara Shepard to major magazines were tweeting and creating gifs in real time. When you put all of these intense reactions together, you get the 15 stages of watching the Pretty Little Liars season premiere.

1. Excitement Was In The Air All Day

Let's be honest, we couldn't think about anything besides the Liars, Charles, and that dollhouse all day. Until 8 p.m., every minute felt like an eternity.

Our favorite cast members watched the premiere with some of their fans at the Children's Hospital Los Angeles.

3. Some Fans Tried To Remain Impartial

Let's just take a minute and try to look at this from Charles's point of view. It's only fair.

5. We Were Relieved That The Liars Maintained Their Sense of Humor

6. Sara Shepard Joined Us In Freaking Out

The genius behind the Pretty Little Liars series of books live-tweeted the premiere and, from the looks of it, she spent the hour on the edge of her seat and creeped out, just like the rest of us.

7. Seventeen Tweeted What We Were All Thinking

Same goes for the entire time Ali was on the run and her hair, makeup, and nails always looked immaculate. But I digress...

8. Then It Was Time For The Emotional Moments To Become Gifs

To be fair, Ali, you also spend a lot of time lost in the woods when you're with your friends. But the sentiment is sweet.

9. Everyone Was Feeling The Stress

10. But Calling The Rosewood PD Was Not The Answer

And this one is intriguing...

12. Not Everyone Presented A Plausible Theory

This is no laughing matter! Then again, Pretty Little Liars has been known to throw us some wild curve balls before, so I may be issuing an apology in a few months for mocking this Gossip Girl crossover theory.

13. Andrew's Diary Excerpt Was Passed Around

Don't worry, he doesn't hate them or anything, he's only dedicated his life to making them suffer. I'm really starting to see the sympathetic side of this Charles suspect.

That yellow ruffled tank is so 2010 and, frankly, I'm getting a little sick of seeing it on every girl in Rosewood. This bird print blouse is a huge improvement. It's designed by Haute Hippie and it can be yours for a reasonable $395, FYI.

It's safe to say Pretty Little Liars is back with a vengeance — "Game On, Charles" proved to be one of the strongest episodes yet. More please!