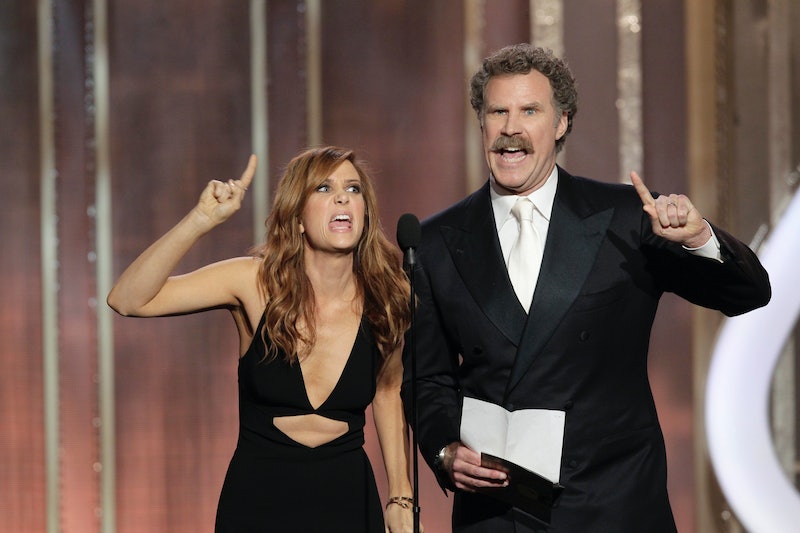 UPDATE: Lifetime has confirmed that A Deadly Adoption is coming to a television near you on June 20, 2015.

When the news first started making the rounds that Kristen Wiig and Will Ferrell had a secret Lifetime movie coming out, I was skeptical. We all were, really, because this news debuted on the Internet on April Fools' Day, and then, when the news leaked, the film was allegedly said to be scrapped because the surprise element was gone. That only made the audiences even more suspicious, that the project could have been kept a secret for such a long time and that everyone finding out about it resulted in it losing any chance of ever coming to light. You know what other kinds of projects have those problems? Fictional ones. However, it appears that Ferrell and Will's secret Lifetime movie is coming out after all, and it's coming out a lot sooner than we all thought.

According to a billboard on Hollywood Boulevard, the movie, called A Deadly Adoption, is set to be released on Lifetime on June 20. The poster features the tagline, "The birth of a plan gone wrong." However, there might still be a reason to doubt that this might really be happening: the poster lists the release date as Sunday, June 20, when, in fact, June 20, 2015 is a Saturday. An innocent typo or solid proof that Wiig and Ferrell are still messing with us two months later? Should we be setting our DVR for this movie at all? What is happening, guys?

Getting a giant poster of their faces — a rather realistic looking poster one, too — to promote a movie that isn't even happening would be a bit excessive for the comedy pair. Unless, of course, this promotion is some sort of elaborate and convoluted promotion for another project they've been secretly working on. Perhaps they've got a film coming out where they play two publicists whose clients are themselves, which includes promoting projects like fictional Lifetime movies and the like. Maybe I'm looking for holes to poke in this because this news came out on April Fools' Day, and it has been making me question everything ever since.

Either way, come Saturday, June 20, we will all probably be glued to our televisions see Wiig and Ferrell's upcoming movie. Once you put a giant poster on Hollywood Boulevard, I can safely say that the secret is 100 percent out. And, for those who have forgotten what this amazingly campy Lifetime movie parody is about, allow me to remind you via THR: "The duo stars in the dramatic thriller as a successful couple who house and care for a pregnant woman (Jessica Lowndes) in the hopes of adopting her unborn child — then things quickly go awry." A Lifetime movie starring Wiig and Ferrell? Sign me up.