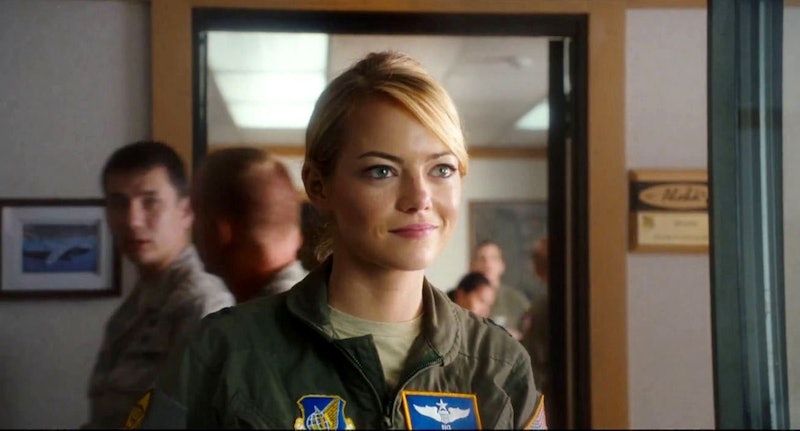 Whether you've actually shelled out the cash to go and see Cameron Crowe's latest film, Aloha , or not, you'll likely have heard of the controversy surrounding it by now. The movie stars some of Hollywood's most in-demand actors at the moment, including Bradley Cooper, Emma Stone and Rachel McAdams. Only there's one pretty major problem: Stone, a clearly Caucasian actress, is playing a half-Asian character. The understandable uproar regarding this casting decision has been vocal, forcing Crowe to issue an apology for Stone's casting via his website, The Uncool, but is it really enough?

Aloha never necessarily had much going for it in general. The story premise, about a defense worker (Cooper) who teams up with a pilot (Stone) to stop a satellite launch in his native Honolulu, Hawaii, is dubious at best — especially considering that even the title itself has drawn serious criticism from native Hawaiians, who found it exploitative even before its release. Discovering that Stone, then, was portraying a half-Asian character in place of, you know, an actual half-Asian actress only increased the vitriol against Aloha, and it doesn't seem as though Crowe's apology has done much to abate the detractors.

Thank you so much for all the impassioned comments regarding the casting of the wonderful Emma Stone in the part of Allison Ng. I have heard your words and your disappointment, and I offer you a heart-felt apology to all who felt this was an odd or misguided casting choice. As far back as 2007, Captain Allison Ng was written to be a super-proud ¼ Hawaiian who was frustrated that, by all outward appearances, she looked nothing like one. A half-Chinese father was meant to show the surprising mix of cultures often prevalent in Hawaii. Extremely proud of her unlikely heritage, she feels personally compelled to over-explain every chance she gets. The character was based on a real-life, red-headed local who did just that.

Whether that story point felt hurtful or humorous has been, of course, the topic of much discussion. However I am so proud that in the same movie, we employed many Asian-American, Native-Hawaiian and Pacific-Islanders, both before and behind the camera… including Dennis “Bumpy” Kanahele, and his village, and many other locals who worked closely in our crew and with our script to help ensure authenticity.

Unfortunately, Crowe's apology comes off more as defensive than actually apologetic. Mentioning that the character of Allison Ng was based off a "red-headed local" doesn't negate the fact that Allison is meant to be half-Chinese and ¼ Hawaiian — not Caucasian. In other words, hair color doesn't indicate race or excuse racial ignorance and erasure, whether in fiction or otherwise. While Stone is undoubtedly a talented actress, I find it hard to believe that there wasn't an Asian actress that couldn't have brought the role to life just as well, and, in fact, likely better, as the representation would be far more authentic than trying to get an audience to believe that Stone is anything other than white.

Aloha's failure to win over audiences and critics alike does seem promising in a few ways, however. First, it opens up a vital dialogue about representation and inclusivity. And, perhaps even more importantly, it proves that the status quo of ignoring diversity and authenticity in favor of catering to popularity is no longer working. We recognize when something isn't right, and we're demanding something different. The world is not a white-washed place, nor should our entertainment be. If there's one thing that Crowe should take from this, it's that people of color don't want representation in words that aren't backed up by actions. It is not enough to say that a character is half-Asian if the actor portraying them doesn't share that ethnicity. We can be doing better. We should be doing better. And I have hope that moving forward, we will.