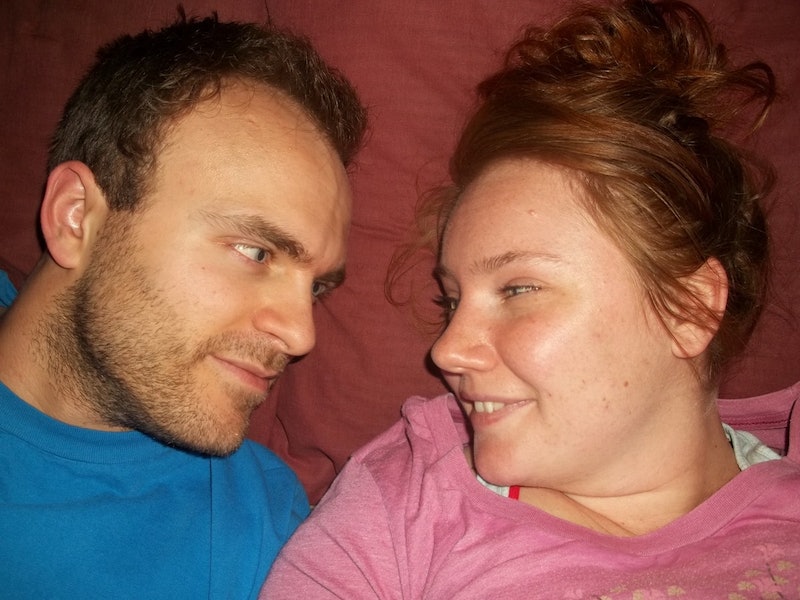 I'm married to a man who, by most fashion lovers' standards, would definitely not be someone you'd ask for sartorial advice. My husband's fashion sense only extends to his favorite pair of blue jeans, a t-shirt, and some comfortable shoes. Not a bad look, really. I mean, I did marry him after all. And, of course, our marriage isn't only built on what we look like.

But despite and probably because of his rather simple style and his borderline disdain of the fashion industry (well, the rules and standards at least), I've actually been able to take a few pointers from the man over the years.

I consider myself a pretty fashionable lady. I mean, I am a fashion and beauty writer. I can spot a trend and generally make it work according to my style. But sometimes — with all the messaging I have around me about what "looks good," how to do my hair, and what "not to wear" — it's good to take a step back and realize that not everything I think about fashion is to be followed all of the time.

Learning to see things from my husband's perspective — even if his ideas don't come naturally to me at times — has enabled me to be a little freer in the way I see both myself and the way I dress.

Living a life together inevitably means that you're going to be shaping the way each other thinks about the world, and I'm happy to say that the following ideas about clothes from my hubby have only been influential in the best of ways.

The proverbial "it" here being the fashion ideals made by... someone else? My hubby has never been "in it" so to speak, so he's had nothing to get over. But for me, sometimes I can be so "in it" that I lose sight of my freedom to just be myself.

His overall philosophy for fashion is that rules are, well, dumb. They should basically be ignored, because the things we wear should be down to the things we like. He's taught me to get over the idea that I have to look a certain way, because looking like myself is when I feel the most beautiful, anyway.

OK, he wouldn't say that it's completely pointless. But he could never understand why I would spend almost an hour in the mirror fussing over my hair when I was about to walk outside and expose my locks to the elements of nature — the key one being wind, which is basically always there no matter the weather.

Go with the flow, he'd say. Wash it, brush it, and however it falls is fine, because it's just going to get messed up anyway! For the most part, I have to admit he's right.

The question, "What am I going to wear?" as I stare blankly at my closet full of clothes just doesn't compute in my hubb's mind. Pick a top, pick some bottoms, and voila! That's as hard as it gets for him.

Obviously a bit of thought should be put into my wardrobe, but I understand what he means. The laborious weight I can put on the decision sometimes is just unnecessary. If I liked the clothes when I bought them, then putting them on shouldn't be so hard to do.

4. Too Much Of One Color Is Not A Bad Thing

He can never understand when I say that two items of the same color "clash." I think it's my penchant for wanting to show off a variety of colors that contrast instead of match perfectly. But you know, in the end, if you really like blue, why not wear a whole blue outfit?

"Does my blank look big in this?" is a question I don't even have to ask my husband, because I've learned by now that nothing I wear can make me look "too big" for his liking — or anyone else's (including my own) for that matter.

He loves to see me breaking rules and wearing things like horizontal stripes, because even though some would say they won't be "flattering" to my already fuller figure, it doesn't matter at all, really. "Bigger" doesn't mean uglier, and I feel like one of the lucky ones to have a partner who doesn't put standards on my size.

6. Makeup Is Great But Not Necessary

If I want to have fun with my makeup, I'm totally free to, but I've learned through my Mister that there's nothing I need to do to be beautiful. In fact, he prefers my natural beauty to shine through.

There's no pressure either way, but I'm positive that I've been able to teach myself to walk out of the house totally makeup free in part because of the years I've spent with him.

I call my husband's white New Balance's his "dad shoes." I mean, I'm kind of right since for some reason so many dads and generally older men wear white tennis shoes. But hey, he's still a young guy, and he doesn't care about ageist stereotypes anyway. Those were the pair he liked and that felt nice on his feet, so he got them!

It's important to realize that fashion has no "age limits," and just because something is typically worn by a certain age-specific crowd doesn't mean it's only for that crowd. My hubby is still a young man, and he's wearing them after all.

In the end, he can rock his so-called "old people" shoes, because he is who he is, and I'm going to love him for that — just like he loves me. (I'm still secretly thankful when he chooses his grey skater shoes over those New Balance's, though.)