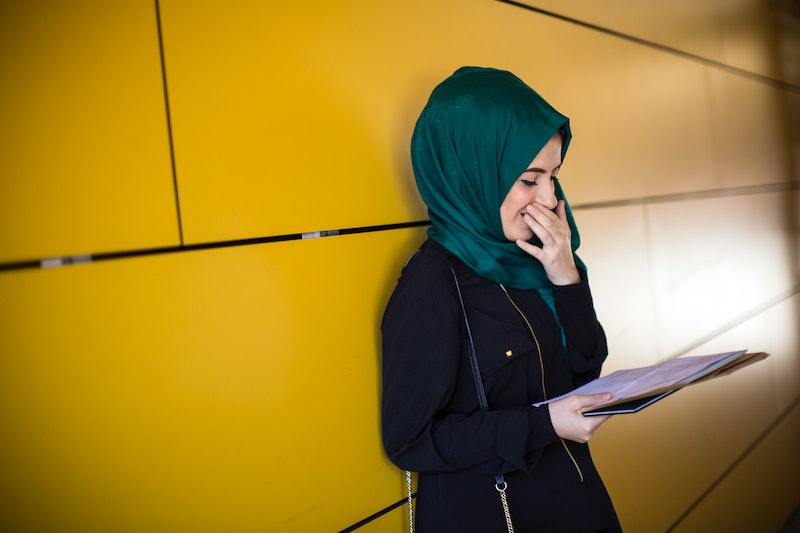 In the last few weeks, we’ve all been giggling over the latest crop of hilarious yearbook quotes, and wishing that we had been that snarky and cool in high school (or, at least, I have). As The Daily Dot notes, a couple of particularly awesome Muslim teenagers' yearbook quotes have gone viral, thanks to their perfect blend of humor and social commentary. Rafika Alami and Fatima Abdel-Gwad are both seniors at high schools in California, they both wear headscarves, and they both used their senior yearbook quotations to skewer stereotypes about Muslim women who wear the hijab.

In her yearbook, Alami jokes, “Only reason I wear this is to give you females a chance,” referring to her gray headscarf. The image when viral, with many citing Alami as an inspiration. The senior told Huffington Post, “A lot of girls are telling me that I've inspired them to be confident, which makes me feel great. I think it's important that girls feel more confident." Fatima Abdel-Gwad poked fun at the frequent questions she gets about her hijab in her yearbook quote, writing, “I hate having to explain to everyone why I wear a hijab but if everyone must know: Voldemort has possessed me and his face is living on the back of my head.” The yearbook pic, which Abdel-Gwad posted to her Tumblr, has received almost 7 thousand "likes" (as it should. Harry Potter jokes are the best). Funny in themselves, these quotes are also notable for subverting stereotypes of hijab-wearing women as meek or somehow oppressed. With their humor, Alami and Abdel-Gwad are showing themselves to be confident and smart, while at the same time calling people out for the unfounded assumptions they make about Muslim women.

Check out Alami and Abdel-Gwad’s yearbook quotes below, as well as those of four other hilarious students, who are surely destined to join the hallowed ranks of “Best Yearbook Quote Makers of All Time.”