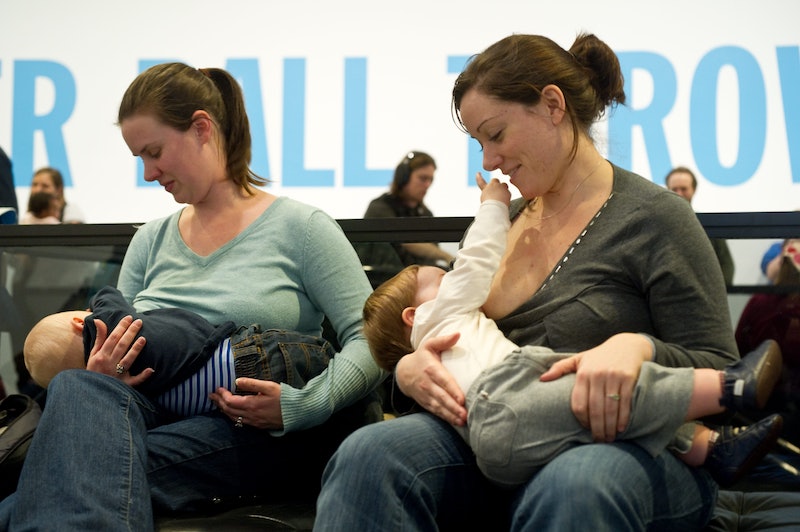 A new study published in the medical journal JAMA Pediatrics Monday dropped some pretty big news for nursing moms everywhere. The main takeaway? Efrat L. Amitay and fellow researchers from the University of Haifa and the Israel Center for Disease Control found that breastfeeding could cut childhood leukemia risks by 19 percent for babies breastfed six months or longer.

While at first blush that number may not sound super impressive, according to experts, it is. Childhood cancer is the second-leading cause of death among children under 15 in the United States, and leukemia accounts for 30 percent of all childhood cancer cases. And those rates just keep climbing.

"Even though childhood leukemia is quite rare, the incidence rate increases each year," study author Efrat L. Amitay told LiveScience.

It's true; according to the latest stats, leukemia rates steadily rose by 0.7 percent between 1975 and 2011 in the U.S. alone. Things haven't been much better in Europe, either, which saw a 0.6 percent rise between 1978 and 1997. But just why those numbers keep climbing has been stumping experts for years — until now.

A lingering theory known as Greaves' hypothesis is what finally drove Amitay and fellow researchers to look into the a possible breast milk connection. In their recent study, they put it to the test.

In a nut shell, Greaves' suggests that a prenatal genetic mutation may be causing certain children to become more susceptible to leukemia. (If that just scared the crap out of you, you're not alone. But please — read on.) According to the theory, exposure to "infectious agents" will cause that cancer to grow after birth. Unlike formula, breast milk is "a live substance," Amitay explained to LiveScience; and as such, it's loaded with natural antibodies produced by the mother that help boost a baby's immune system.

To explore this possible connection, experts for the study combed over 18 previously published reports on the link between breastfeeding and leukemia, which compared data gathered from 10,292 kids and teens diagnosed with leukemia and 17,515 who were not.

No matter how they sliced the data, there was no getting around it: Children who breastfed for six months or longer were 14 percent to 19 percent less likely to develop leukemia. This link remained strong even when taking into account different kinds of leukemia, as well as a child's age at the time they developed it (since babies diagnosed before one year may have developed it in the womb).

But that's not all — the numbers were even pretty good for babies who breastfed less than six months. In a separate review of 15 reports, the same researchers found that infants who were given breast milk for as little as one month were decreased their leukemia risks by 11 percent.

So is this it? Have we suddenly found the "cure" for leukemia? Was it right there in our breast milk all along?

While this would definitely be amazing news, it's probably a bit too soon to start making any grand declarations. After all, right now all that's been proven is a correlation; not a direct cause. Despite the scope of the report — which so far is definitely one of the largest —more research still needs to be done.

Plus, it bears mentioning that not everyone can breastfeed or get access to breast milk so easily. And even for moms who do breastfeed, reaching the American Academy of Pediatrics' recommended six-month breastfeeding guideline can be sometimes hard to achieve. These realities and more can make studies like this one a bit hard to hear for parents who formula feed or wean early. In an interview with Forbes, Dr. Alison Steube, an OBGYN and assistant professor of maternal and child health at the University of North Carolina School of Medicine, said:

Unfortunately, in the United States, breastfeeding is not "highly accessible" for many women. To achieve six months of breastfeeding, women must overcome routine maternity practices that undermine breastfeeding, lack of paid maternity leave, poor support from health professionals and outright hostility for feeding their babies outside the home.

Other studies have also suggested that breast milk benefits may have been overstated. Last year, a team of researchers at Ohio State found that while there is in fact a correlation between breastfeeding and healthier babies, that may have more to do with socioeconomic status than anything else. In a press release, study author and Ohio State University professor Cynthia Colen said:

Many previous studies suffer from selection bias. They either do not or cannot statistically control for factors such as race, age, family income, mother’s employment – things we know that can affect both breastfeeding and health outcomes. Moms with more resources, with higher levels of education and higher levels of income, and more flexibility in their daily schedules are more likely to breastfeed their children and do so for longer periods of time.

For now, Amitay and fellow study authors are just focusing on spreading the word about their findings and educating moms.

"The many potential preventive health benefits of breastfeeding should also be communicated openly to the general public, not only to mothers, so breastfeeding can be more socially accepted and facilitated," the researchers wrote.

For more, check out the full study here.

More like this
Wimbledon Alters All-White Kit Rule Amid Candid Period Discussions
By Catharina Cheung and Rachel Mantock
These Are The Best Supplements For Runners
By Carolyn Steber
Hailey Bieber Has A "Painful" Ovarian Cyst "The Size Of An Apple"
By Radhika Menon
The Best Lat Exercises With Dumbbells, According To Trainers
By Carolyn Steber
Get Even More From Bustle — Sign Up For The Newsletter