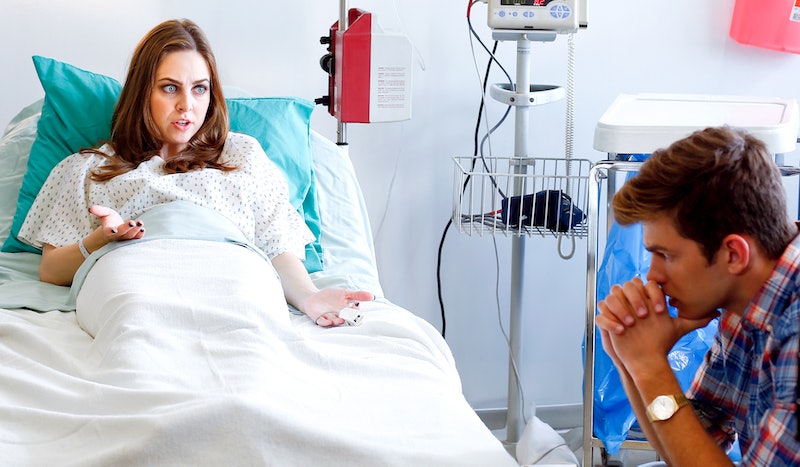 Since most of Lifetime's recent films have been ripped from the headlines, you might be wondering if the network's latest, Double Daddy, is based on a true story. While high school kids do get into plenty of trouble in the real world, this one is a Lifetime original. Double Daddy tells the story of a teenage Lothario who manages to get not just his girlfriend, but also the girl he's cheating on her with pregnant. Then, instead of rightfully kicking their duplicitous BF's butt like he deserves, the two high school girls turn on one another.

The movie also features the presence of actors well into their twenties playing teenagers, a common trope that lets Double Daddy be enjoyably silly rather than exploitative. I mean, the end of the trailer shows a crazy-eyed pregnant girl played by Brittany Curran pushing another, more normal pregnant girl played by Mollee Gray from High School Musical down a hill in the middle of the forest, so you need a few reminders that this did not really happen. I actually think it's more similar to other TV movies than anything from real life. Trust me, that's a good thing. It just makes Double Daddy easier to enjoy as a guilty pleasure than if it was harrowing recreation of an actual tale about high school relationships gone bad. Here are a few fictional tales the movie may remind you of.

This seminal Lifetime favorite shows the rapid spread of syphilis across an entire high school after one guy contracts it. Classic quote, which was spread around my high school faster than the fictional clap? After receiving the inoculation, the bad boy announces to the overwhelmed nurses' office, "You're gonna have to stick 'em all — because I probably did!"

Obviously this is not Kirsten Dunst's most well-known work, but she's pretty solid in another Lifetime movie, Fifteen and Pregnant, as a teenager who suffers humiliation as a part of the troubles facing her after she unwillingly gets pregnant.

Double Daddy doesn't seem to have any religious themes the way Saved! does, so the similarities are slight. The only inspiration here is the rivalry between the two main characters. But Mandy Moore's Catholic schoolgirl does have the same crazed energy as Curran's performance.

This one was based on a real case from Gloucester, Mass., and follows a group of teens who choose to get pregnant on purpose. The reason why is unclear, until an investigative journalist goes to the school and uncovers that it's basically the new popular-girl status symbol.

And, Of Course, Everything On MTV

The 16 & Pregnant/Teen Mom series changed reality TV forever, and how we think of pregnant teenagers, too. It makes you shocked, it makes you disgusted, it makes you tear up. Double Daddy may not be based on a true story, but Teen Mom proves that even true stories of teenagers giving birth can go in unexpected directions worthy of TV.