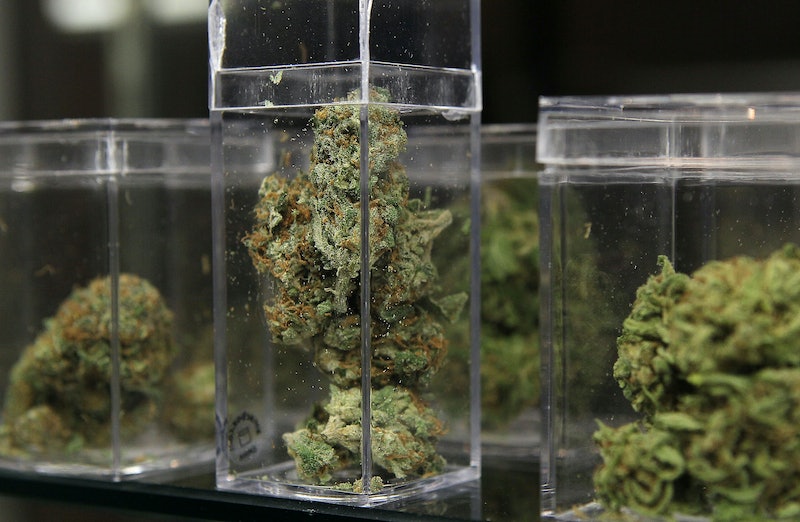 Lincoln Chafee has joined the presidential race, announcing a bid as a Democrat on Wednesday despite starting his career as a Republican. Chafee was elected as a Republican senator from 1999 to 2007, then switched his status to Independent prior to being elected the governor of Rhode Island. He then became a Democrat. Sound confusing? So does his policy on marijuana, which Chafee admits isn't completely formed despite his White House aspirations. According to U.S. News & World Report, Chafee's thoughts on the legalization of marijuana will be revealed quite soon. Chafee says that his stance "will evolve during the campaign."

Chafee's official presidential candidate site makes no mention of marijuana and only touches on four main issues, which he dubs "priorities." In the past as governor of Rhode Island, he signed legislation decriminalizing possession of up to an ounce of marijuana. Those found with an ounce or less would face a $150 fine rather than jail time. Prior to the 2012 passing of such legislation, possession of marijuana was considered a misdemeanor. Those who were convicted could face fines of up to $500 in addition to potential jail time. Chafee has otherwise politically done little to establish a voting record either supporting or decrying the use of marijuana aside from the decriminalization legislation, though his being in favor of decriminalization came as little surprise to those in Rhode Island and may point toward a positive view on legalization.

The only other public statement that Chafee has made on the subject came about during a 2014 interview with The Huffington Post regarding the legalization of marijuana following Colorado and Washington's legalization efforts. Chafee again committed to little in his statement, instead offering up the following:

Let's take it step by step on full legalization of marijuana, though; we want to see how it's working in Colorado. Certainly, the revenue is enticing for all governors. ... The ability to tax and put that revenue to beneficial means, whatever that might be — infrastructure, education — is tempting for governors.

Chafee said this while still serving as governor of Rhode Island and just two years after passing the aforementioned decriminalization legislature. Given his focus on the revenue possibilities over potential societal issues, it appears that Chafee would be more focused on what marijuana can do economically rather than the continued changing attitudes towards legalization around the country, though it does bode positively for Chafee's stance on legalization given just how economically successful the move has been for Colorado. According to the Pew Research Center, as many as 53 percent of Americans support marijuana legalization. The issue will continue to come up as Chafee mounts his presidential bid, and his current opinion and voting record, however limited they may be, do point towards an eventual embracing of marijuana legalization.