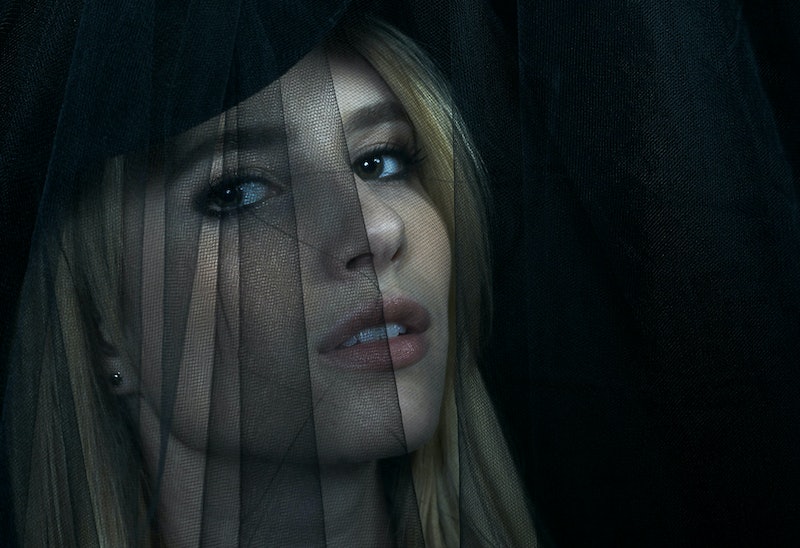 Where American Horror Story is concerned, dreams really do come true. We asked, and we received the return of the formerly deceased Madison Montgomery (Emma Roberts) on Wednesday's episode because living without our favorite pain in the ass was simply unbearable. She's a little weary, her arm is stitched on like Franken-Kyle, and she's suffering from some serious amnesia, but Madison and her one-liners are back from the dead (and Spalding's creepy doll room).

Her return didn't come without a little pain, though. First, we're made to endure Spalding's lies about how Madison made it into his creepy trunk. He lies and says he killed her so he could have sex with her dead body — all a ruse to protect Fiona — but the way in which Denis O'Hare's creepy timbre describes his necrophilia lies is almost unbearable. Luckily, Nan finally realizes he's lying, so we're spared the notion that these horrible things actually happened — even if he did actually play with her like a human doll. This leads Zoe to enlist Misty's help to resurrect Madison, which is a process that requires Madison's shrill screaming for what feels like an entire episode of Two and a Half Men. Finally, Madison is alive (still pale and crusty, though) and they take her back to the house.

There, we learn that Madison has no memory of who she was before she came to the School for Exceptional Ladies, which basically puts her back at the bottom of the totem pole so Zoe can keep her new leadership role. Still, it's a thrill to have her back, because even if she's not head bitch in charge, Madison is still Madison and we can certainly expect more of this dramatic awesomeness:

Her Lack of Fear in the Face of Dead Boy Parts

Her Lines Borrowed From Meryl Streep in The Devil Wears Prada

Her complete lack of humility

The fact that she's totally the Regina George of this Coven

And that's why we're so thrilled she's back

More like this
'Black Mirror' Season 6 Is Reportedly In The Works, Here’s What To Expect
By Maxine Harrison
Eleven Turns To An Unlikely Source To Regain Her Powers In Stranger Things 4
By Brad Witter
The Grey's Anatomy Season 18 Finale Finally Revealed If Japril Got Back Together
By Brad Witter
'Obi-Wan Kenobi' Takes Place After This Key Star Wars Movie
By Arya Roshanian
Get Even More From Bustle — Sign Up For The Newsletter