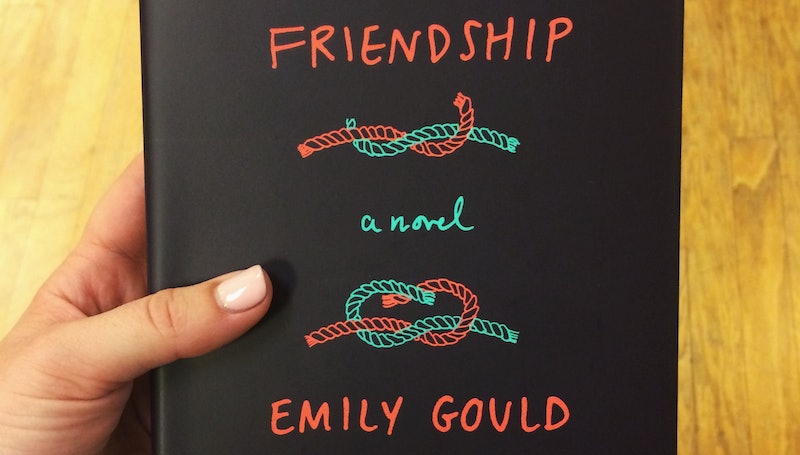 If you Google “quotes about friendship,” you’ll be inundated with pages and pages of quotes and screeds and gifs and nifty little pictures that appear to be primed for Instagram placement, a mountain of material that aims to explain the full spectrum of friendship in one snappy sentence. It doesn’t seem likely that the main characters in Emily Gould’s novel Friendship , writers Bev Tunney and Amy Schein, would ever feel the need to trawl the web for other words to describe their relationship (words are their stock and trade, after all), but if they did go looking, there’s one quote from Elbert Hubbard that might strike both of them: “A friend is someone who knows all about you and still loves you.”

Gould’s first novel follows Amy and Bev as they stumble about their lives — and their friendship — in increasingly worrisome ways. We learn in flashback that the duo met as plucky young publishing employees, and while at least Amy enjoyed a brief spat of professional notoriety (Amy’s tenure at a popular website, and her subsequent flame-out, closely resembles Gould’s own term at Gawker), neither of them is doing very well when the book opens. Amy is toiling away at a boring job at a nowhere website, while Bev is struggling to land a gig (any gig) after taking time off to follow her no-good boyfriend to grad school. Both of the girls are ambitious, smart, and talented, but it takes a lot more than that to succeed in the world of New York media and publishing.

Things get significantly worse when Amy loses her (again, boring, but at least steady) job and Bev decides to go forward with a pregnancy that’s the result of a really heinous one-night stand. Gould doesn’t give her characters some sort of candy-coated happy ending, instead offering up a story about the uglier side of friendship, and what it really means to know someone and still love them. If you’ve already read (and loved) Friendship, here are nine other books you'll want to turn into your new BFF.

I'm So Happy For You by Lucinda Rosenfeld

Like Friendship, Rosenfeld's 2009 novel focuses on a pair of slightly mismatched best friends and their surprisingly complicated relationship. While Daphne has always been a bit of a disaster — in all areas of her life — her BFF Wendy has always been there to help her out of any and all tough jams. It seems like the sort of arrangement that works for both of them, but when Daphne suddenly gets her life together, it soon becomes clear that it really only works for Wendy, and she's having a heck of a time wrangling her jealousy and still being a good pal.

A single friendship can be complicated enough, but as Bev and Amy learn in Friendship, adding new pals to the mix can result in unexpectedly outsized drama. Fierro's book tracks a single weekend in the lives of a mixed group of thirtysomething couples, and the results feel real, fresh, and kind of upsetting. As the novel unfolds, Fierro craftily exposes the true nature of her various characters, along with long-simmering emotions (some good, most bad) that finally bubble up in gut-churning fashion.

Gould neatly deconstructs and upbraids the world of New York media and publishing, handily exposing some of its worst traits through the eyes of both Amy and Bev. Waldman does something similar with her debut novel, focused on a once-popular writer (just like Amy!) who has skated along on his single book for far too long. Wrapped up in himself, his work, and his (still mostly unproven) brilliance, Nate zigs and zags his way through the writerly world, never finding what he wants and, still worse, never quite grasping what that might actually be.

My Salinger Year by Joanna Rakoff

Rakoff's memoir recalls her time working for a slightly backward literary agency in the '90s. Desperate to make her mark in the writing world, Rakoff struggles to succeed in her day job, while continuing to nurture her larger ambitions and a sunny disposition that never seems exactly right for her chosen profession. Things get still more complicated when Rakoff is tasked with weeding through the fan mail of the agency's biggest author — J.D. Salinger, naturally — and she uses it as a chance to hone her own skills.

The Appetites of Girls by Pamela Moses

A book that will likely also appeal to readers who enjoyed novels like Commencement and The Group, Moses' novel gathers together a foursome of very different young women, all college freshmen tossed together by the whims of the university housing gods, who quickly bond and vow to stay friends forever. It's a sweet thought, of course, but it's one that's hard to put into action, an idea that Moses toys with as the novel winds on and the girls continue to grow up (and maybe apart?).

Jacob Have I Loved by Katherine Paterson

One of the most striking elements of Gould's novel is her keen ability to depict honest, loving friendship that is marked by profound and deep jealousy. Paterson's classic YA novel does the same thing, bolstering the story by applying it to a pair of sisters (twins, even!), who struggle to marry their affection for each other with a long-simmering envy that never really dissipates.

The Circle by Dave Eggers

Eggers' amusing send-up of Facebook and other pervasive social media start-ups serves as a more wonky companion to Friendship, which is at least mildly preoccupied with how modern media shifts and changes. Bev and Amy — especially Amy — struggle to acclimate to a professional climate that probably doesn't really suit them. Amy's experiences at a misguided and mismanaged website are hilarious and strange, and she'd probably have felt a whole lot better about them if she'd been able to read The Circle during her tenure.

The Fever by Megan Abbot

Abbott really knows her way around girls and their prickly friendships (have you read Dare Me? add that one to your to-read list pronto), and that skill is on full display in The Fever, a creepy and twisted thriller that's as much about a series of strange events (teenage girls falling ill with a mysterious illness that seemingly doesn't have a cause) as it is about the bond between supposed BFFs. The book wraps up a bit too neatly, but it's still got a major twist and — bonus! – it's about to be an MTV series, which should only expand out its clever premise into even better territory.

And The Heart Says Whatever by Emily Gould

Gould's first book is a collection of personal essays that track her own coming-of-age with the same kind of uncomfortable honesty and biting observations that mark Friendship. If you enjoyed Friendship's vaguely veiled allusions to Gould's own life, And The Heart Says Whatever should please you pretty immensely, along with giving you deeper insight into what makes this writer tick.