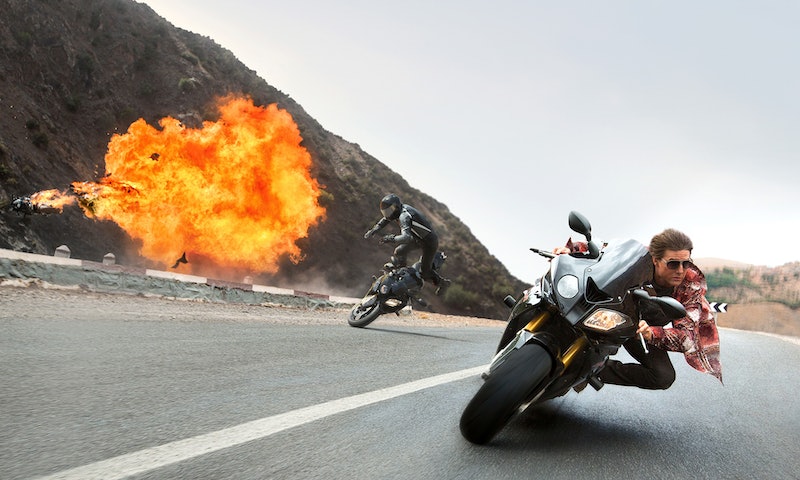 The gadgets and spy games are back! Tom Cruise is once again reprising his role as IMF agent Ethan Hunt in the ridiculously popular Mission Impossible franchise. The trailer for Mission Impossible: Rogue Nation hit the Internet on Thursday, and it promises to be one of the most absurdly kick ass action flicks to hit theaters this summer. The trailer is chock full of explosions, familiar faces, and lots of things flying through the air. If you're too busy with your busy business life to check it out, here's a play-by-play of the most awesome moments from the trailer.

When we last saw Agent Hunt in Mission Impossible: Ghost Protocol, he was fighting to clear the IMF's good name after the organization was framed for a bombing at the Kremlin. This time around, the IMF is yet again under attack, only this time by a rogue nation — hence the title — comprised of agents with the exact same super duper secret spy training as the IMF agents (or, as Hunt is quick to point out in the trailer, the "anti-IMF"). Thrilling.

Without further ado, here's the moment to moment breakdown of all the gasp-worthy revelations, car fights, and surprise stars in the Rogue Nation trailer.

Three seconds in to the trailer, Alec Baldwin's soothing, gravely voice is already calling the shots. What the what? Did he start a side job as a trailer announcer?

2. Simon Pegg Is Back

Thank the deity! Simon Pegg, who also starred in Ghost Protocol, is back for more! Jeremy Renner's back, too, but I'm not sure how to feel about that right now.

I believe it was Ingmar Bergman who said, "No film is complete without at least three motorcycle chases." Wise words.

Oooh, Alec Baldwin is in the movie! And he's the villain? Damn you, Jack Donaghy!

5. ETHAN GETS SAVED BY A NEW FEMALE CHARACTER

One pretty consistently good thing about Mission Impossible is its portrayal of female characters as being incredibly strong and smart. Frankly, they're usually stronger and smarter than Ethan.

The song, "Ready or Not," is amazing in its own right, but it gives the trailer an extra level of chilling anticipation.

"I like the script, but something's missing.What is it?... I know! More motorcycles!" —Tom Cruise at every producers' meeting, probably.

8. A Choreographed Knife Fight In The Air

That's not where knife fights go.

What would this franchise be without high tech gadgets and made up science?

Forget Tom Cruise — this dress is the star of the movie.

Oh! You got me again, Mission Impossible. Every time with these hyper-realistic face masks.

That's not where cars go

13. Tom Cruise Holding Onto The Outside Of A Plane... In The Air

That's not where Tom Cruise goes!