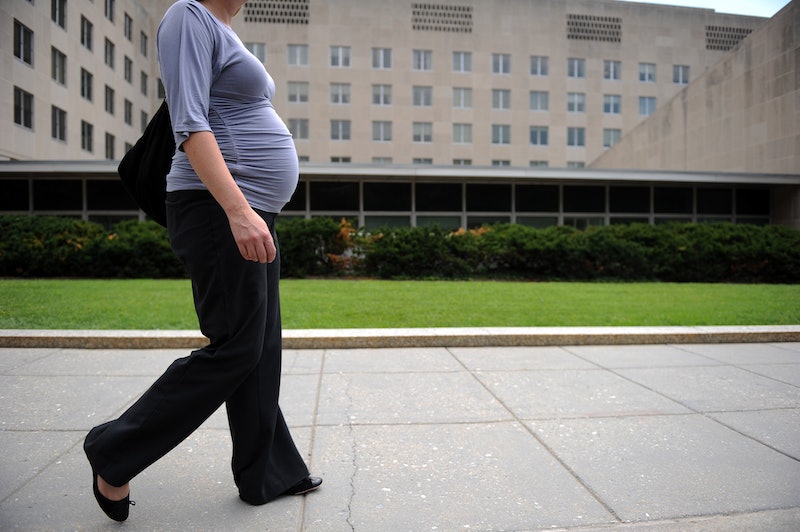 A bill that would help pregnant women continue working is getting another chance in Congress. The Pregnant Workers Fairness Act is being reintroduced in the Senate on Thursday, and this time it has Republican support. The bill has been dead on arrival few times because it only had a Democratic backing, but this time it has a fighting chance. Passing the Pregnant Workers Fairness Act (PWFA) would be hugely beneficial for women who need to continue working throughout their pregnancy.

The PWFA would require employers to make small changes, such as switching them to less physically demanding tasks or allowing them to sit, to allow pregnant women to continue working safely. Employers can only get out of the requirement if they prove that making changes would create "an undue hardship" for their company. The increased support for the bill comes after the Supreme Court ruled in favor of Peggy Young, a former UPS employee, who was forced to take unpaid leave during her pregnancy instead of being offered lighter tasks. Democratic Senator Bob Casey is reintroducing the bill with the sponsorship of Republican Senators Kelly Ayotte and Dean Heller, according to Think Progress.

In a statement to Bustle, Cecile Richards, president of Planned Parenthood Federation of America, said: "Since women now make up almost half of the workforce, the reality is that we have more pregnant workers than every before — all of whom should be given access to the temporary job-related accommodation they need in order to maintain a healthy pregnancy. We proudly support the Pregnant Workers Fairness Act which promotes healthy pregnancies and economic security for pregnant women and their families and gladly welcome bipartisan support on this issue."

1. It Affects Two-Thirds of Women

About 66 percent of American women today work through a pregnancy, up from 44 percent in the 1960s. Workplace fairness has always been an issue, but requiring accommodations for pregnant women on the job is more urgent now that it affects two-thirds of women nationwide.

It's no secret that women make less money than men, a gender gap that has hardly budged in the last decade. Because of this, it's even more crucial that women be able to work while pregnant if they choose to. Having to take a months-long unpaid leave would be financially draining for many women.

While 45 states prohibit pregnancy discrimination, only 14 and Washington D.C. have laws in place requiring employers to make reasonable accommodations for pregnant employees that want to keep working. That means women in a whopping 36 states don't know whether or not they'll get to keep their job if they become pregnant. Let's change that Congress.

More like this
'The Capture' Is Finally Back – & S2 Looks Tense AF
By Sophie McEvoy and El Hunt
The Lionesses Are Calling For Equal Access To Football In Schools
By Sophie McEvoy
Abtaha Maqsood Wants To Change The Way You Think About Cricket For Good
By Shahed Ezaydi
42 Black Owned Fashion & Beauty Brands To Support Today & Always
By Mekita Rivas, Shea Simmons, Kui Mwai and Dominique Norman
Get Even More From Bustle — Sign Up For The Newsletter