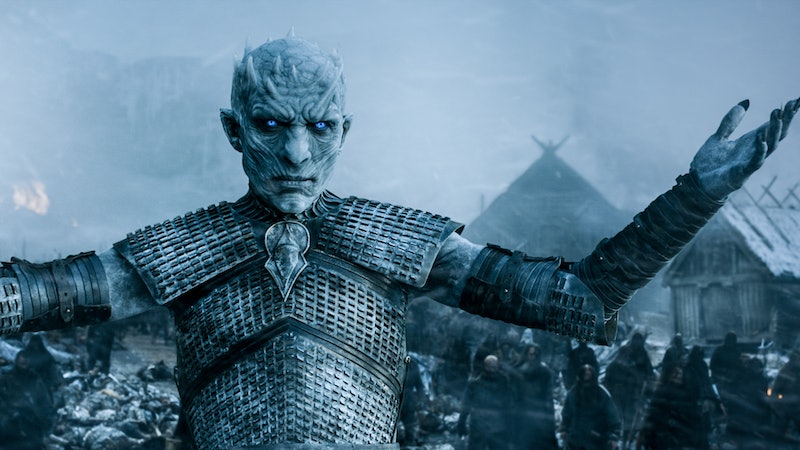 Everyone has a motive on Game of Thrones. Whether it's to rule the Seven Kingdoms or take vengeance against their enemies, each individual has their own unique incentives for doing what they do — and that includes the undead. Ever since the show began, viewers have caught little more than glimpses of the Game of Thrones White Walkers and the wights that they command. But now that we've seen the sheer force of their numbers and power against that of the Night's Watch and Wildlings, I've found myself growing more and more curious than ever about what it is that the White Walkers want. What is their ultimate goal in all of this?

Sure, it'd be easy enough to classify them as having no real motive — that they only kill for the sake of killing. And while that could very well be true, it isn't nearly as exciting as it would be to think that there's an actual method to their madness. That they are, in fact, serving some greater purpose that we have yet to know about, possibly giving these creatures an added depth we never thought they had. So just in case there is more to these ice cold killers than meets the eye, here are a few options of what I think their potential endgame could be. (Please note that some reasons are more serious than others.)

They Want What Everyone Wants: To Rule

Even the dead can be thirsty for power, and given what we've heard about the Night's King — who allegedly was once the lord commander of The Night's Watch — it wouldn't surprise me if he's looking to eventually claim the Iron Throne for himself. Though, if that happens, we might have to start referring to it as the Ice Throne instead.

They're After The Dragons

George R.R. Martin's book series is called A Song of Ice and Fire, so wouldn't it make sense that the inevitable endgame will be between the creatures that are made of ice and can breathe fire? Perhaps the White Walkers aren't creating wights and building up their army to destroy mankind, but rather to help save it. Winter is coming… but maybe it's to save the day. Pretty mind-blowing, right? But hey, on a show like this, the line between your enemies and your allies can get pretty blurry, making this a very possible outcome.

They're Dying To Try Those Lemon Cakes

Maybe after reading Sansa's rave reviews about them on Yelp (or whatever Westeros food critics used during those days), the White Walkers couldn't resist the temptation any longer and ventured out on a quest for one very specific thing: dessert. (Hey, you try eating nothing but snow and ice for thousands of years and see how well your temperament holds out.)

They Want To Avenge The Starks

Some have speculated that the Night's King is an actual member of the Stark family from long ago. Could he somehow possibly know all the horrible things that have happened to his remaining descendants? If so, that leaves him with more than enough motive to seek out those who've wronged House Stark and avenge the family's honor. Perhaps the saying "There must always be a Stark in Winterfell" isn't just a well known catchphrase, but rather a loaded warning to those who seek them harm.

Maybe this dude just wanted a hug and didn't mean for it to indicate an act of aggression. The point is, we just don't know, which is a great example of why verbal communication is always best in these situations. Otherwise, it's just a bunch of guesswork.

Between the dragons and The Red Women's spells, there's more magic floating around than possibly ever before. White Walkers are magical beings, so it only makes sense for them to be drawn to it like moths to a flame. It's like they always say: all magic comes with a price. (Oh, wait. Wrong show.)

They're Tired Of The Crappy Weather Conditions

I mean, even the dead can only take so much cold. They may just be interested in heading South so they can work on their tans. Plus, who doesn't like a good road trip with friends?

They Simply Crave The Kill

Then again, maybe I'm completely wrong and their actions are without any logic or reason. Maybe they just want to watch the world burn. (Or in this case, freeze.) And that's the most chilling notion of all.