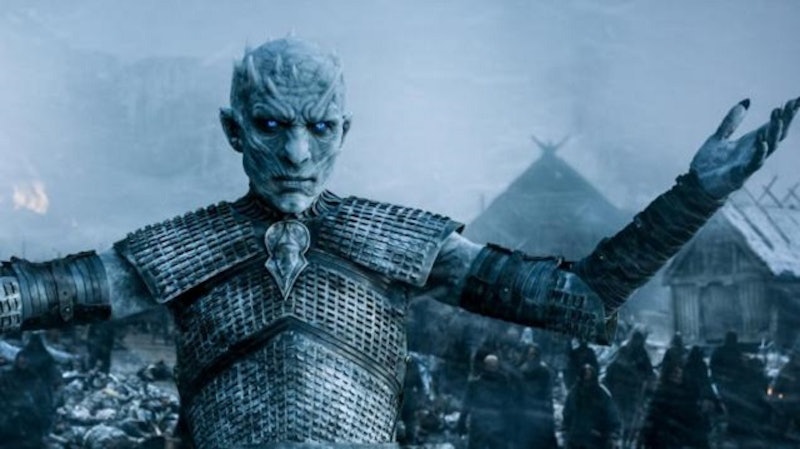 Game of Thrones pulled out all the stops on Sunday night's episode, "Hardhome." (SPOILERS AFOOT) Even the badassery of Tyrion and Daenerys planning to "break the wheel" of the ruling families battling for the iron throne couldn't compete with the action at the Wildlings' camp. Jon Snow, who seemed to know a heck of a lot more than nothing, rocked up with Tormund and the men of the Night's Watch to convince the Wildlings to join their army in Castle Black. These "negotiations" included the brutal clobbing of the Lord of Bones, because that's how Tormund rolls. When the Wildlings finally do agree to join the Night's Watch in order to stack their armies, the White Walkers rain skeletons on their parade.

In a very Walking Dead meets Titanic moment, the free folk and men of Castle Black rush to get as many as they can on rowboats as hundreds of thousands of lightning-fast zombies come for them. The last 15 or 20 minutes of "Hardhome" was a brutal, icy battle that taught us that the Night's King can raise the dead and that whatever the rest of Westeros is worried about...it means nothing. Winter finally came to Game of Thrones and it's only going to get uglier from here. They're going to need a lot more than dragons and a giant to take the White Walkers down.

As intense as "Hardhome" was, it didn't stop the Internet from drumming up some spectacular memes. Here's the best of the White Walker-pocalypse:

And Lastly, One Final Shout Out for Karsi: