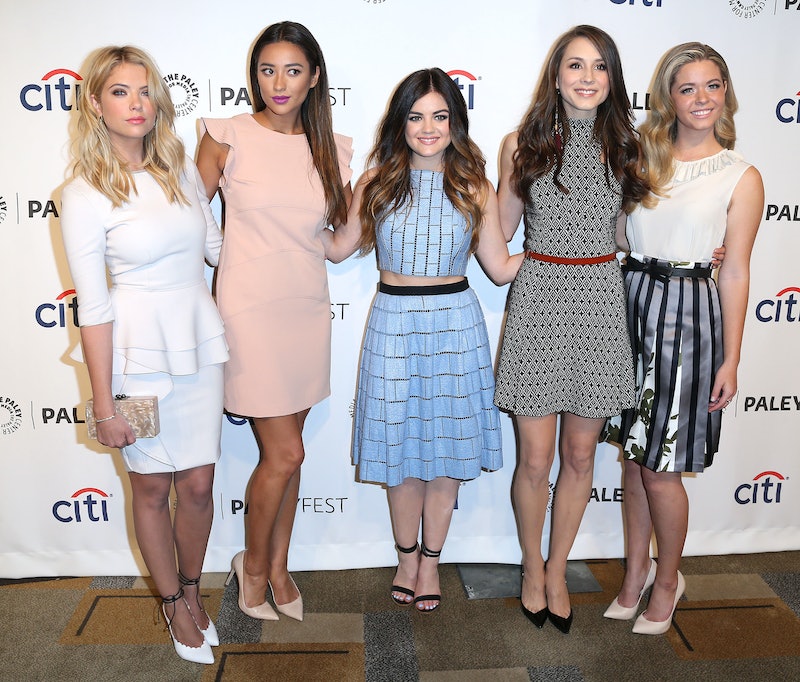 Pretty Little Liars fans need to be reading Sara Shepard's new series The Perfectionists with the release of the second and final book The Good Girls. This time, you don't have to make your way through 16 books for a conclusion (though, totally worth it); there are only two books in Shepard's series, so no excuses. Bonus: They're so exciting you'll tear through them both in a day.

The Perfectionists series follows five high school girls who meet in their film class after being grouped together for a project based on Agatha Christie's And Then There Were None. (Ominous enough for you?) The only thing these girls have in common is an undying hatred for Mr. Popular Nolan Hotchkiss. And so it doesn't take long for their discussion to turn to Nolan and how they would all be better off if he was dead. Except, whoops, Nolan is found murdered at a party they are all at, and now they're suspects. They, however, suspect their film studies teacher, the handsome Mr. Granger. And they take notes from our Pretty Little Liars girls and go investigating.

And Then There Were None by Agatha Christie, $4.86, Amazon

The Good Girls reminds us that back in their class, the five girls — Ava, Mackenzie, Caitlin, Julie, and Parker — didn't just talk about Nolan. They also each fingered another person who they wouldn't mind dead. And now, those people are being found murdered too. Shepard puts us alongside the girls, with our minds spinning, to see if who really is killing all of these people they named.

Like Pretty Little Liars, The Perfectionists is all about secrets and lies, but really it comes down to the characters. Just like we love Emily, Aria, Hanna, and Spencer, and OK love to hate Alison, you're going to fall for Ava, Mac, Caitlin, Julie, and Parker. To introduce you to these girls, I did a little Pretty Little Liars math to match them up with their counterparts.

Beware: Pretty Little Liars and some book one of The Perfectionists series spoilers ahead.

Half-Iranian, half-Irish, great student Ava Jalali had everything going for her. But now, her beloved mother has died and her father re-married the awful Leslie, which Pretty Little Liars' Hanna can commiserate with. And that's why when all her film studies group started naming people that they'd like gone as in D-E-A-D, Leslie's name was the one she said.

To add to the misery, Ava, like Aria, knows what it's like to have the whole school talking about your love life. Except in Ava's case, the rumors really are just rumors. So maybe Ava came running out of film studies teacher Mr. Granger's house with her shirt incorrectly buttoned looking disheveled, but readers know this is more a case of badass mystery solving than Aria and Mr. Ezra Fitz love story. But for such a great student, of course the rumor mill would go bananas, especially because she has a boyfriend Alex. And um, especially after Granger winds up dead.

MacKenzie "Mac" Wright is Julliard-bound thanks to her incredible cello skills. But still, she can't seem to just be happy. And it's not just because she's a main suspect in two murders. Mac got into Julliard despite the machinations of her alleged BFF Claire, who tried her darndest to dash Mac's dreams by sabotaging her audition. She could probably bond with Hanna over her supposed BFF Mona, who was hiding a little sabotage behind her hoodie-adorned back as well.

But Mac would also find common ground with Emily, because she knows what it's like to have to hide a forbidden crush. While Emily started off pretending she was into guys and doing whatever she could to hide herself, before she came out and openly dated women, Mac has been madly in love with her best friend Claire's boyfriend for years.

I know, there's nothing more shocking in the Pretty Little Liars universe than parents who are happily married. But Caitlin has been adopted by her two loving mothers, and they really seem to have a good thing going. It's the small piece of safe harbor as Caitlin tries to beat the rap on two murders (because this is still Sara Shepard). Caitlin is also the star soccer player for her high school, and she could swap locker room stories with Emily, whose sport of choice was swimming.

But boy, the conversations she and Spencer could have about dating. Spencer had a little thing with not one but two of her older sister's boyfriends: Ian and Wren. Caitlin, meanwhile dropped her serious boyfriend and fellow soccer star Josh for ... his younger brother. Awkward. And though she's similar to a couple of the PLL girls, she would have despised Alison, the queen bee. Her younger brother committed suicide after he was bullied by Nolan Hotchkiss, and Alison was a huge bully herself.

Like our queen bee Alison, Julie Redding was worshiped in high school, so much so that girls in school dressed and acted exactly like her (this should also be familiar to PLL fans). But unlike Alison, Julie's hiding a secret: Her mother is a hoarder, and all those designer clothes she wears? They're second hand. Hanna can get behind that, though she always resorted to stealing rather than going consignment. And more on the Spencer not Alison side of things, Julie also is really good in school.

But the popular status goes haywire and Julie becomes more pariah than queen bee when her secret is out. That doesn't stop the hot new guy for falling for her, a la Hanna and Caleb. (Swoon, Caleb.)

Mona could get behind Parker's black hoodie wardrobe choice. But Parker is more about staying hidden than raising hell. Parker is the most mysterious of the five leading ladies (*cough* Alison) but that's because she's hiding from her traumatic past abuse from her father, who is now in jail. She used to be high school royalty and best friends with Nolan before her father hurt her, but now she's withdrawn. But after Nolan is found murdered, she finds common ground and maybe even friendship with the four other girls. If she doesn't fit in at Beacon High School, I think Hanna would appreciate her sharp attitude, though she'd probably try to dress her in more color.