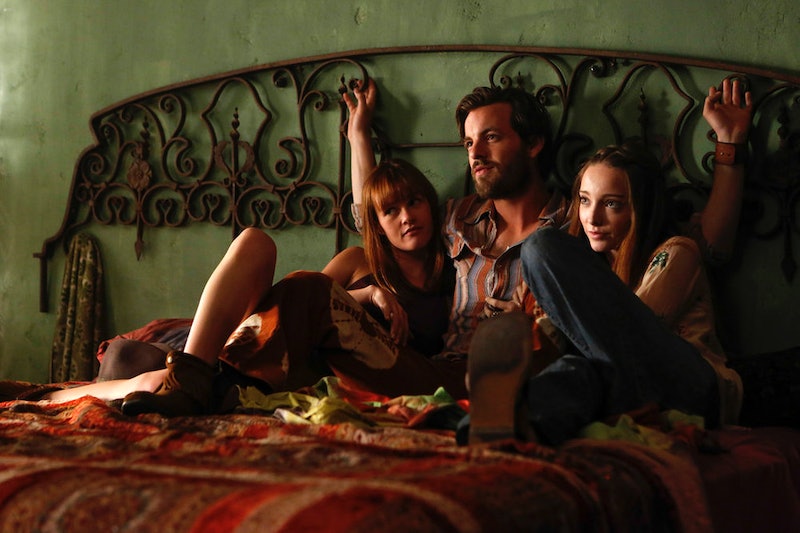 There's a new NBC series, Aquarius, which revolves around "Charlie" Manson and his family that is now infamously known as the Manson Family. The time period of the show is about two years before the murders that the Manson Family committed. Because the show is based on the events that occurred in the '60s, audiences are bound to wonder if characters on Aquarius are based on real people. Well, there are two characters on Aquarius , Katie and Sadie, who are probably inspired by real people from the Manson Family, and they're pretty important players in the Charles Manson murders years after the time of the series.

Patricia Krenwinkel and Susan Atkins are two women who murdered people during the Manson-led murders in 1969. While they lived amongst the Manson Family, they were known as Katie and Sadie, respectively. As we've seen on Aquarius, Manson is known for giving new names to the members of his gang (see: Emma being called Cherry Pie). So considering that these women were given the names Katie and Sadie by the real life Manson, it is very, very possible that the two characters on Aquarius are both inspired by Krenwinkel and Atkins (especially because these two women became very well-known for their connection to Manson in later years). In one episode, Sadie even introduces herself to Emma's mom as Susan Atkins.

In the summer of 1969, Manson led a group of his followers to kill seven people. The Tate and LaBianca murders involved home invasions in the Los Angeles area and the killings of eight-month pregnant actor Sharon Tate and six others. Krenwinkel and Atkins were both eventually arrested for their crimes and sentenced to life in prison. The LA Times says Atkins was known for giving the impression of a soulless killer by telling the court during her trial, "You'd best lock your doors," she said, "and watch your own kids."

Both women were found guilty of seven counts of first-degree murder. They were both given the death sentence, but later reduced to life in prison. Susan Atkins died in prison in 2009 from brain cancer, but Patricia Krenwinkel remains in prison (making her the longest serving woman in California prison system).

So when it comes to Aquarius, keep an eye on Manson's followers Katie and Sadie. Although the series takes place two years before things turned to murder for the Manson gang, it will be interesting to see how the series depicts these very illicit criminals on television.