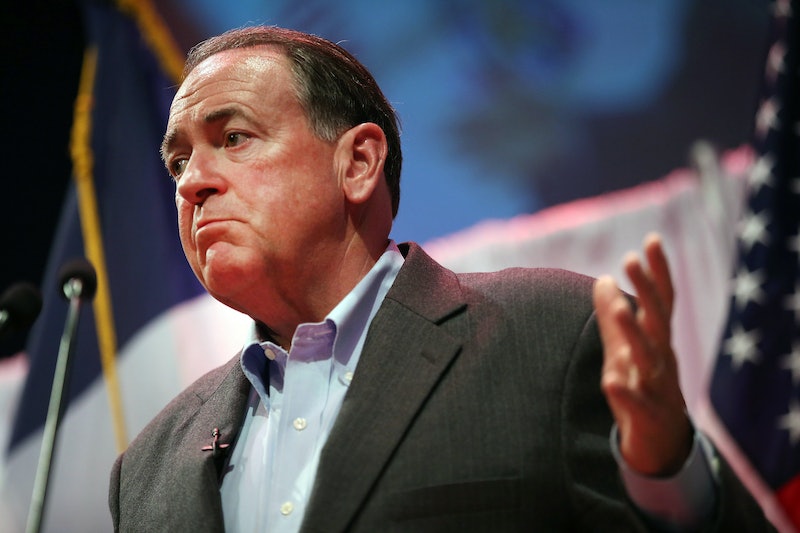 BuzzFeed unearthed a gem from The Huckabee Report this week. In an episode of his podcast, which was released in January, it seems that Mike Huckabee is confused about if topless women are helping or hurting sexism. How can feminists both decry bare-breasted women in tabloids and launch campaigns for women to go shirtless in public? Mike Huckabee needs answers, ladies! Luckily, I think I can clear a few things up for the former Arkansas governor.

Huckabee laid out the quandary for his listeners: Earlier that week, British tabloid The Sun appeared to get rid of its Page 3 girls, or the topless young women featured in its print edition every week. Feminists thought that was a pretty good idea, and Huckabee noted that the change only happened "in response to a long campaign by feminists who called the photos of bare-breasted women sexist, offensive, and outdated, and said that doing away with them was a huge step for challenging media sexism."

So how, then, could feminists also support, as Huckabee called it, "the crusade to allow women to walk around in public shirtless, the way some men do," otherwise known as the Free the Nipple campaign? Isn't all toplessness bad?! Huckabee summarized this existential question.

So, are topless photos of women an offensive display of sexism, or an empowering blow against sexism? I have a feeling most men don’t care much either way.

Ah, well, that settles it. Men don't really care. But since you devoted airspace to bringing it up, Mike, it seems like you or at least some of your audience might be interested. So I'm here to help you out as real, live feminist. You know, just for your own edification!

First, the Page 3 girls weren't really gone. It seemed that The Sun pulled a prank on those darned feminists, making them think their repeated calls to get rid of the page actually worked! Ha! Women's equality is hysterical.

So, Mike, this is why feminists think that putting topless models on the third page of a tabloid is sexist — because it is. You see, Governor, the tabloid is turning these women's breasts into something that you can buy. If you purchase the publication, you are guaranteed entertainment in the form of young, topless women. They are these women's partial nudity as a display feature.

Now, on to Free the Nipple. Don't you think that it's a little strange that men allowed to be shirtless in public, but in many places in the U.S. it is illegal for women to do the same? What's so offensive about nipples, Mike? The Free the Nipple campaign contends that it is a form of censorship, and I have to say that I agree! Women's bare chests shouldn't be inherently more offensive than men's, don't you think? If you're still curious about all of this, there's an entire movie dedicated to the subject.

So, Mike, I know you don't care. But just in case you're confused about what feminists think, you should probably ask a feminist next time! Just a thought.