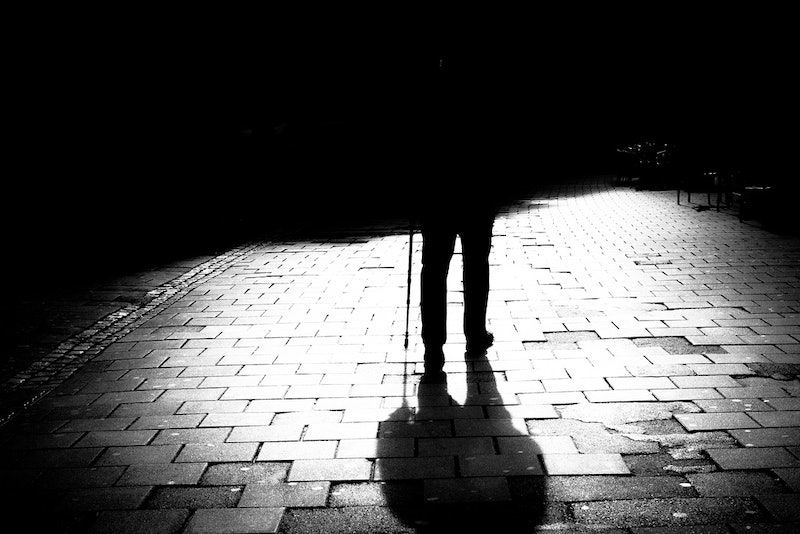 Because it's Saturday, and because it's finally starting to feel like summer, let's indulge in a few freaky stories, shall we? After all, warm weather means campfires and s'mores, and campfires and s'mores always require a few frightening tales to go along with them. So here — have some scary creepypasta monsters guaranteed to keep you up at night. Because what are weekends for but staying up until the sun rises?

I'll be honest: Creepypasta about monsters aren't typically my favorites. It's easy to write bad creepypasta; it's also easy to write bad monsters; so writing bad monster creepypasta? The ease with which it can be accomplished has resulted in an awful lot of terrible stories. These 10, though? They're pretty effective, mostly because they're all getting at something deeper. A good monster is never just a monster, you see; it always represents something else, whether it's a fear of not knowing who to trust or whether it's a lament for your lost childhood. We personify our fears in order to deal with them, because it's easier to process a tangible creature than it is a nebulous thought or feeling.

Some of these monsters may roar loudly; others might lurk silently. Either way, though, they're out there. Are you ready to fight them?

To be honest, I don't actually think “Anansi's Goatman Story” is particularly well written. Despite that, however, it's enormously popular; it's also one of the most notable cryptid stories out there, so it's worth a moment of your time.

From what I gather, “The Smiling Man” is a true story. The Redditor who wrote it, blue_tidal, initially posted it in two different subreddits several years ago, which perhaps has led to some confusion about whether or not it actually happened — it showed up both in r/LetsNotMeet, which is devoted to real life encounters with terrifying people, and in r/NoSleep, which is largely fictional but which asks all its readers to suspend their disbelief while they're there. In any event, though, blue_tidal later stated that the incident in question happened in Seattle — and while it's perhaps not outright horrifying, it's an excellent example of how effective that slow, creeping sort of dread can be.

Late night walks are a terrific way to clear your head. Sometimes, though, you run into things you might not expect to find. A smiling man performing some sort of strange, shuffling dance in the distance might not seem too threatening at first… until you see what that smile looks like up close.

Then you're going to want to start running.

OK, so technically Kuchisake-Onna isn't a creepypasta; she is, however, an urban legend, and since creepypasta are pretty much the urban legends of the digital age… well, let's stretch our definitions a little. Plus, she's one heck of a frightfest.

The story originated in the late '70s around Japan's Nagasaki Prefecture. Rumors began spreading of people walking home late at night spotting a young woman with a surgical mask covering her face. She'd stop and ask them if they thought she was beautiful. If they answered no, she'd whip out a pair of scissors and kill the victim. If they said yes, she'd pull down her mask — and reveal a face slit from ear to ear. She would then pose her question again; if her target said no, she would cut them in half, and if they said yes, she'd give them a Glasgow grin to match her own.

Oh, and you couldn't run away from her. She'd just rematerialize in front of you. Throwing some candy might distract her, but she wasn't someone you could easily escape.

Japan's ghost stories are second to none, and this one? It's one of the creepiest. Here's the really weird thing, though: Part of the legend claims that a coroner discovered a set of records in October of 2007 describing a woman who wore a surgical mask chasing children down in the '70s. She died when after being hit by a car — but not before sustaining injuries the ripped her mouth open. I'm not sure whether or not it's true, but it would be pretty wild if it were, wouldn't it?

4. That Thing That's Not Your Mom

Here's a twofer — a pair of tales in which a parent may not be quite what they seem. True creepypasta stories, these tales seem to have no specific author, and they're always retold verbatim. It's never been proven that they feature the same monster, but there are certain similarities that are hard to miss.

This one is called “Bad Dream”:

You blink your eyes and pull up on your elbows. Your clock glows red in the darkness — it is 3:32 AM.

"Do you want to climb into bed and tell me about it?"

The oddness of the situation wakes you up more fully. You can barely make out your daughter's pale form in the darkness of your room.

"Because in my dream, when I told you about the dream, the thing wearing Mommy's skin sat up."

For a moment, you feel paralyzed; you cannot take your eyes off of your daughter. The covers behind you begin to shift.

And this one is sometimes called “Mother's Call” or “In the Kitchen”:

A young girl is playing in her bedroom when she hears her mother call to her from the kitchen, so she runs downstairs to meet her mother.

As she's running through the hallway, the door to the cupboard under the stairs opens, and a hand reaches out and pulls her in. It's her mother. She whispers to her child, "Don't go into the kitchen. I heard it too."

Life pro tip: Anything that calls itself “funny” in a creepypasta is most definitely not going to be funny. “Funnymouth” comes to us courtesy of Christopher Howard Wolf, aka Slimebeast, who's also the mastermind behind “Abandoned by Disney” and “Lost Episodes.” Funnymouth him-, her-, or itself — I'm not totally sure which to call it — may not be a monster in the classic sense; I suppose it's probably most akin to a virus. But it's a virus that behaves like a human, and it's trasferred through a medium most of us can't avoid using: The Internet.

All I'm saying is, maybe it's worth disconnecting a little bit this weekend. You don't want to end up with a funnymouth, do you?

“The Blind Maiden Website” isn't quite a ritual or game creepypasta (think “The Midnight Game”), but it's not exactly a full story, either. It tells of a website, www.blindemaiden.com, which can supposedly only be visited at exactly 12 AM on the night of a new moon. Exactly why anyone would want to access the site remains to be seen, as what follows sounds like something out of The Ring… but apparently if you're looking for the ultimate thrill, this is how to get it. She may be blind — but she's not planning on staying that way for long.

Incidentally, it's a new moon on May 18. Anyone want to give it a shot?

I don't know about you, but I think Mr. Bear of “1999” is the scariest creepypasta monster out there. Why? Because he's human.

“The Theater” is one of the first creepypasta stories I ever read — and while it's not as overtly freaky as some of the longer ones out there, it's still pretty weird. It centers around a computer game called The Theater, which was allegedly released around 1993 (the same time that Doom hit shelves, the story specifies). But even allowing for the terrible graphics of the era, there was still something just sort of… off about the game.

Here's what I mean: It rarely installed properly, and even when you did manage to get it running, it was enormously buggy. Seemingly meant to be an educational game, it involved players arriving at a cinema, picking a “movie” to watch, and then having the screen fade to black on them before dumping them back out in the pixelated cinema's lobby. After you'd done this enough times, though, some strange things began to happen: First the Ticket-Taker disappeared; then he reappeared later on with a heavily distorted head. Eventually he told the player, “NEVER REACH OTHER LEVELS” — whatever that means — after which the hallway that led to the cinema's movie selections became blocked by a brick wall. Clicking on the wall closed out the game, and that was kind of that.

...Except not really. The Theater is apparently only available as a bootleg these days, with all the original copies having been destroyed. But those who do manage to get their hands on a copy? Well, let's just say the Ticket-Taker doesn't always leave them alone — even after they've shut down their computer.

Originally created on 4chan, The Rake doesn't really have a story attached to him, per se; he does, however, have a pretty whacked-out MO. He's some sort of creature, vaguely man-shaped, and he tends to hunker down at the foot of your bed and stare at you out of hollow eyes in the middle of the night. But that's not all he does; sometimes he attacks. If he doesn't want you there, he will find some way to take everything you hold dear — ruining your life in the process.

We've talked about Slender Man before — sometimes in quite a serious manner indeed — but no list of creepypasta monsters would be complete without his inclusion. I still think he was at his most effective shortly after his creation by SomethingAwful “goon” Eric Knudsen, aka Victor Surge; I'm firmly of the belief that what we don't see is often scarier than what we do see, and those two images told us juuuust enough to get our imaginations going. He looked mostly like a man… but not quite like one. He was unnaturally tall and thin, and he always showed up shortly before the disappearance of a number of children. He hovered in the background, and no one noticed him until after he had already taken what he came for.

Exactly why he wanted the children in the first place has never been determined.