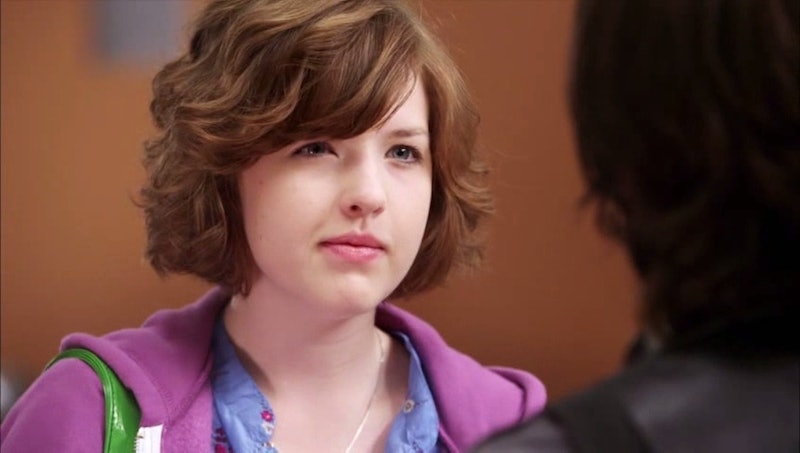 On Thursday morning Variety announced that TeenNick has cancelled Degrassi after 14 seasons. As I diehard Degrassi fan, I did not take this news well. (Think lots and lots of Snapchats of me sobbing into my laptop.) Fortunately, this news may not beas life-changing and awful as it sounds: according to Entertainment Weekly, Degrassi may be off TeenNick, but episodes of the show may still be produced and to air through another U.S. broadcaster. (Can someone please make a petition for ABC Family to pick it up?!) Though this doesn't seem to be official as of yet, there are so many reasons why it should be — and Degrassi 's cemented reputation as a feminist TV show is one of them.

Degrassi has produced well over 300 episodes, so many of which showcase issues that young women face everyday around the world. It's not exactly the first or only show on the air to do that, but it's how Degrassi handles these issue that deserves applause. The female characters on Degrassi are given as much agency as their male counterparts and are the stars of their own stories — the show lets us see these issues through the eyes of the people living through them.

Here are seven feminist moments that proved Degrassi gets it.

Emma Gets Her First Period

Getting your first period in class while wearing a brand-new white skirt is pretty much every preteen girl's nightmare, but this episode wasn't played for laughs. Emma, remembering her own mother's line about never letting anyone make her feel bad for being a woman, shuts down the bullies by calmly explaining to them that the menstrual cycle is "perfectly natural." Because it is. Uh, duh.

Manny Chooses To Have An Abortion

14-year-old Manny finds out that she's pregnant and grapples with the tough decision she must make. Does she keep the baby, as the father Craig wants? Does she give it up for adoption, as Emma suggests? After a long talk with amazing feminist mom, Spike, Manny decides to have an abortion — a decision that she, and she alone, makes.

Terri Calls Out Her Haters

Terri kind of got the short end of the Degrassi stick (she basically gets pushed into a rock by her abusive boyfriend and leaves the show forever) but, before she bows out, she gets to shut down one huge, body-shaming jerk. Terri's plus-sized modeling campaign for "More Grrrrl" (OK, I admit — terrible, terrible name) gets her picked on by some idiot selling ice cream, which makes the often insecure Terri question pretty much everything about herself. But instead of dwelling on what this jerk thinks, the typically timid Terri shuts him down royally with this very quotable comeback: "I just made $500 today as a plus-sized model. Yeah, plus-sized. How much do you make, ice cream boy?"

Everything About Alex And Paige

File this one under both LGTBQ-friendly and feminist. The romantic relationship between Alex and Paige came as a surprise to audiences, and opened up a conversation about what sexuality really means. In the above clip, Alex shuts down Jay for offensively suggesting that her flirting with Paige is merely a way to get attention from guys.

Emma was excited about her new gig as a spokesperson for Purple Dragon, until she was told by her boss to lose weight and let sleazy guys harass her to protect "the brand." Emma stands up for herself... in a really dramatic fashion, but hey, that's Emma for you.

Was I very, very mad that the writers decided that Clare should have a baby pretty much one nanosecond after she completed cancer treatment? Yes — I thought that an awful lot for one girl to have to deal with her senior year of high school. Teen pregnancy isn't exactly brand new to Degrassi, but throughout every step Clare has proven to be in the driver's seat of the pregnancy, deciding how much the father should be involved and how she'll balance college and raising a child. (That's great news, because her baby daddy, Eli, was being kind of the worst about the whole thing.) Giving Clare agency in her own pregnancy is super feminist: not everyone will be happy with her decision to have a baby, but at least the decision is hers.