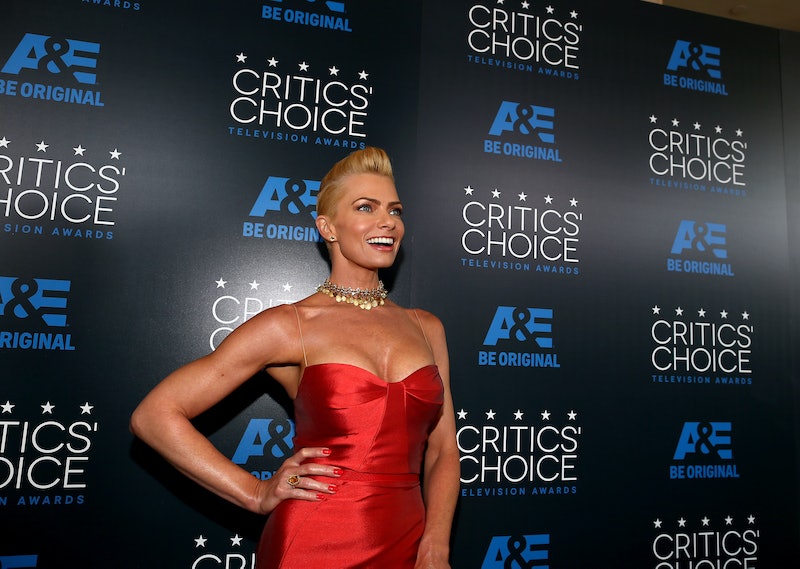 2015 is definitely the year of the braid. From messy braids, waterfall braids, crown braids, and new braid bars where you can get your locks done on the go, everyone is rocking the timeless style, but it's Jaime Pressly's braided mohawk, aka a super edgy spin on the French braid, that's got us talking.

At the 2015 Critics' Choice Awards last week, Pressly rocked the carpet in a mermaid cut, scarlet red gown. But unlike the messy, haphazard braids of Coachella, her braided hairstyle didn't remind us of sexy sea sirens. Instead, the actress' sleek blonde locks, arranged in a new take on the French braid, conquered up images of biker chicks and rock goddesses.

The look was created by hairstylist Jonathan Hanousek, who kept it super short and sleek on the sides and taller at the top, to give the illusion of the chicest mohawk we've ever seen. "We wanted something glamorous, but with a twist," Hanousek told Refinery29. "She loves her hair sleek, but I wanted to see some texture, so I created her braided hawk."

The braid is a total standout for it's hardcore, intimidating feel that's so out of the ordinary in a sea of demure milkmaid styles. But don't let it intimidate you! The complicated-appearing look has already been tackled by the Youtube beauty vloggers, making it easy for you to copycat Pressly's badass braid!

More like this
Iris Law's Skunk Mullet Is Not For The Faint-Hearted
By Tomi Otekunrin
How To Master Baby Braids, According To TikTok
By Tomi Otekunrin
The Little Princess Trust Is Accepting Afro Hair Donations For The First Time
By Tomi Otekunrin
Lily Collins Swears By This Product For Perfectly Air-Dried Hair
By Keely Weiss
Get Even More From Bustle — Sign Up For The Newsletter