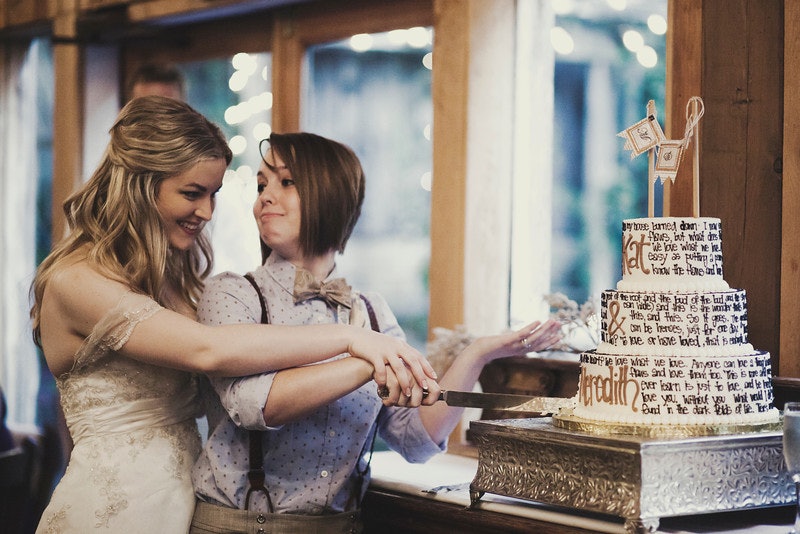 Ready for your daily dose of "Awwwww!" Same-sex couple Meredith Hendrix and Kat Jackson recently posted their wedding photos on Tumblr and, besides being adorable, they seemingly generated only positive comments upon going viral. Yay, humanity! Meredith Hendrix-Jackson's parents might have refused to come to her wedding, but since then over 60,000 people have liked or reblogged the photos, wishing her and her new partner well.

In a country that where marriage equality moves too slowly, where anti-LGBT bullying is normal and called healthy peer pressure by some, where people complain about "It Gets Better" campaigns, and where discrimination against LGBT people in the workplace is still legal under federal law, we've come to expect backlash against same-sex couples. But even though it's sad that unanimous support for someone's wedding photos is news, it's still an auspicious sign that things are improving.

Hendrix-Jackson was moved by the outpouring of support and posted a response to all the positive attention on her Tumblr a few weeks after the photos. In it, she says:

I want all of you to understand this thing:

I posted these wedding photos because this was the most amazing day of my life. I’ve been married for about two months, and goddammit, it has been just the best, you know? Like, this woman, in these photographs? She’s incredible. She’s unreal. She’s kind and she’s thoughtful and she’s everything I never thought I deserved. She’s the woman who I get to spend the rest of my ridiculously lucky life with.

But it’s so complicated to so much of the world.

She also spoke about not being able to even hold hands in public and her own discomfort about sharing personal details at work for fear of reactions. Her partner, she revealed, was even fired from her job as a driver for a children's occupational therapist after her boss saw the couple kissing at the mall and decided she shouldn't be around children. And, most heartbreaking of all, she writes, "I walked myself down the aisle at my wedding because a church told my parents that it wasn’t possible for them to attend my wedding."

But brimming with happiness, she goes on to marvel that, of the tens of thousands of notes the photos have received,

not a single message I’ve received, not a single reblog that I have been able to find, has had anything to say but amazing, beautiful, kind words of congratulations. No bullying. No trolling. No inappropriate offers or lewd remarks. Out of tens of thousands.

And as unfortunate as that fact is, this is surely a sign that we are making progress. And that maybe the Internet isn't always an awful place full of crazy people and haters. To reward us all, she posted...even more photos! Though she calls them the "blooper reel," they are no less adorable.