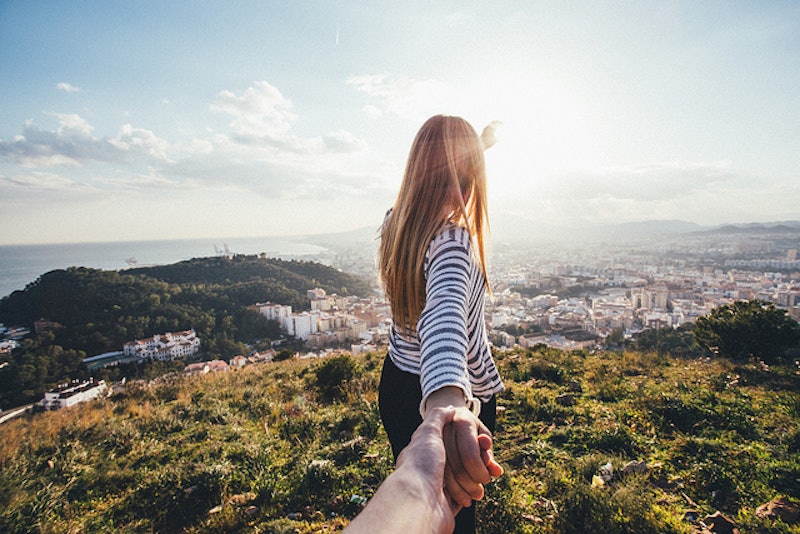 Vacations are, for the most part, totally fun. Traveling with your significant other, even better! But planning a vacation may be another story. After all, there's so much to think about. Where are you going to stay? What are you going to do? When is the best time to book tickets? And so on. But when you really get down to it, the answer to those questions really depend on one thing: money. A new study found that women are more likely to do the research and plan for a vacation than men. However, women were also the ones to spend more.

In a survey conducted by the International Currency Exchange (ICE), they looked at the vacation spending habits of men and women in the UK. They found that 43 percent of women were more likely to plan ahead by researching everything like the cost of food and drinks, in comparison to only 38 percent of men who said the same thing. Then again, just because the women do the research, it doesn't necessarily mean they'll follow it.

"Our survey results show women are much more likely to spend more on holiday than men – 15% of women said they spent more than £200 a day, compared to just 5% of men. We reckon this is because women like to go all out when they are on holiday. If they are planning the holiday and being as organised as they can be, the holiday is an escape for them and a reward, so spending more money will just come natural to them."

According to Sarkari, women tend to spend money on things like clothes and duty free products, while men will choose to spend on food and drinks. Some men might even find themselves with extra money left in their wallets when they make the return trip home.

The study also found that while women took the lead when it came to vacation planning, financial planning for those vacations were a different story. In fact, 81 percent of men said they took it upon themselves to save up for their trips, compared to 72 percent of women. Additionally, women are over 10 percent more likely to take out loans just for the sake of a taking a vacation, while more men would prefer to put everything on a credit card. All in all, as the survey has shown, men may be just a bit more financially conscious than women.

"We generated these results as we want the public to be aware of the results we received and general spending habits. We are hoping that men and women around the world spend more time thinking about their spending and take time and consideration in saving for their holiday and be careful when it comes down to taking loans out," Sarkari told Bustle. "We would recommend that couples should share and spend their money together on things they both enjoy doing, compromise is the best thing."

Did you hear that everyone? Compromise is key.

Despite the differences in spending, taking a much needed break from reality to get some alone time elsewhere with your partner is actually a great idea. Because the weather is getting warmer, now's a great time to book those tickets, hit the road, and just get out of town for a bit with your special someone. As science shows, it will do both you and your relationship some good.

Here are five ways vacations benefit your relationship, according to ccience:

1. Your first trip as a couple can actually determine how your relationship will play out in the future.

Vacations are supposed to be relaxing. However, as many of us know, sometimes, things don’t work out exactly the way we plan. Experts have found that traveling ups the pressure in a relationship. Because of that, you can tell many things about you two as a couple such as how much fun you’ll have together or how you’re able to overcome vacation fails and solve problems together.

Researchers at the Purdue University Inran Lehto found that vacations promote “crescive bonding,” which basically means shared bonding, by nurturing connections. When people share memories together away from all that ordinary every stuff like work, they’re easily able to promote positive connections with each other.

3. Couples who travel together just have better sex.

The 2014 Expedia Pleasure Index surveyed 2000 Americans and found that one in two people were more likely to have sex with their partners while on vacay than at home, 93 percent said they were at least “somewhat likely,” and 77 percent believe that vacations were important to the overall health of their relationship. Most importantly, Americans who took three-plus vacations per year were found to have much higher relationship satisfaction than those who didn’t.

4. Traveling together doesn’t only improve the sex, but also the romance.

The same U.S. Travel Association survey found that 83 percent of couples who travel together say their romance is still very much alive in their relationship, while 72 percent believed that traveling inspired romance.

In a study of 2000 happily married couples, Headwater Holidays discovered the three things happy couples do to maintain their successful marriages. One of them being, getting some time alone together away from everyday life. In fact, couples who took short breaks away together at least twice a year found greater long term happiness.

More like this
After 24 Years Of Disney Vacations, I Finally Took A Trip On My Own
By Charlie Mock
These Are The Fastest Electric Kettles You Can Buy
By Margeaux Baulch Klein
16 Valentine’s Day Quotes About Chocolate That Will Make You Hungry
By Emma Cueto
21 Galentine’s Day Memes To Celebrate Your Best Friends
By Meghan Bassett and Mia Mercado
Get Even More From Bustle — Sign Up For The Newsletter
From hair trends to relationship advice, our daily newsletter has everything you need to sound like a person who’s on TikTok, even if you aren’t.