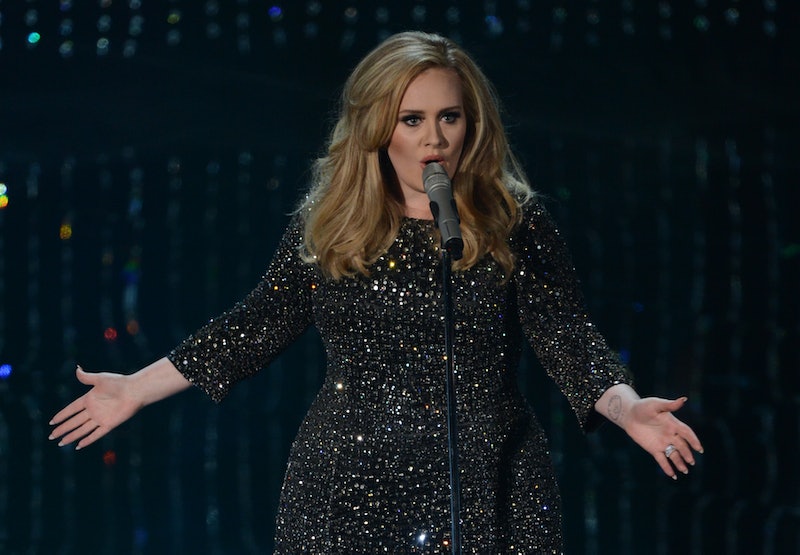 On Thursday evening, Showbiz 411's Roger Friedman shot down rumors that Adele is recording the theme for the next James Bond movie, Spectre. (He revealed that Sam Smith may be "in the running.") Damn. That's seriously disappointing — especially when you consider just how good her Skyfall theme is. It won an Oscar in 2013 for Best Original Song, for gosh's sake! However, there's a silver lining here: Friedman let slip that Adele is planning to release her new album in the fall. Wow. I think I speak for pop music fans everywhere when I say YESSSSSS!

Could it possibly be true? Is the follow-up to the critically acclaimed 21 premiering in just a few months?

While this information hasn't been confirmed by the 27-year-old British singer's management team, it is consistent with a January 2015 Music Business Worldwide report that states that her new LP could debut during the "second half" of the year... but I'm not going to get my hopes up quite yet. Here's why: Inside sources reportedly told MBW that Adele's record labels — Columbia in the United States and XL/Beggars in the United Kingdom — are completely, 100-percent supportive of her "taking her time" while recording her new project (probably in part because of 21 's continued commercial success).

That's great! But, as we all know, art takes time — and Adele has always struck me as a bit of a perfectionist. (That's not a slight — I just think she's committed to only putting out her best work.) So, in other words, I'm worried that it could still be a while... but I'll definitely keep my fingers crossed!