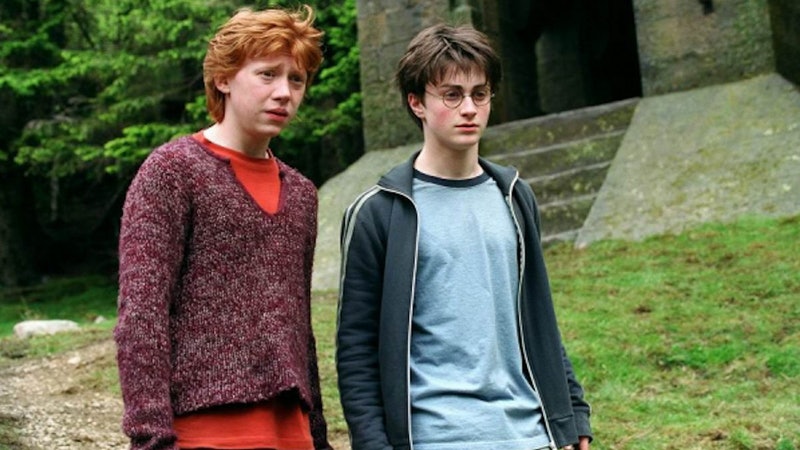 When I was in elementary school, I bought a hair crimper and wore knee socks so I could be more like Hermione Granger (you know, just in elementary school and not now... ), because she was an amazing character — she was smart, confident, and constantly stood up for herself and her friends. And she wasn’t the only fierce female at Hogwarts that I wanted to emulate — from the daring and cool Ginny Weasley, to the quirky Luna Lovegood, to the tough and awesome Professor McGonagall, Rowling created a world filled with complex, three-dimensional female characters. The series may be titled for the boy who lived, but he never could’ve accomplished everything without the girl who was the cleverest witch of her age, or without the sacrifice of his selfless mother, or even without the constant protection that Petunia Dursley reluctantly extended.

A series with all these amazing female characters is obviously chock full of feminist moments from the ladies of Harry Potter. But what about the male characters?

Turns out, the male characters of Harry Potter have plenty of feminist moments themselves. From the wise and fair Albus Dumbledore, to the affable yet observant Fred and George, to the chosen one himself, the men of the Harry Potter books stand up for the heroines in their lives time and time again. Remember...

Harry and Ron rescue Hermione from a troll, but instead of holding it over her head and acting superior, they treat it as a bonding experience. Plus, they recognize that they weren't blameless (since they locked the troll in the bathroom with Hermione in the first place), and give her credit for her quick thinking, which got them out of trouble.

When Harry Sends Hermione to Get Dumbledore

After Hermione solves a logic puzzle, she and Harry realize that only one of them can go on to save the Sorcerer's Stone, whereas the other will have to go back. Harry tells Hermione to go back, trusting her to save Ron and find Dumbledore while he tries to save the Stone... which means that he trusts her to save his life. And instead of acting like an arrogant hero, when Hermione says that he's a "great wizard," he responds, "I'm not as good as you," demonstrating how much he respects her.

When Dumbledore Refuses to Underestimate the Power of a Mother's Love

"Your mother died to save you. If there is one thing Voldemort cannot understand, it is love. He didn't realize that love as powerful as your mother's for you leaves its own mark. Not a scar, no visible sign... to have been loved so deeply, even though the person who loved us is gone, will give us some protection forever." — Harry Potter and the Sorcerer's Stone

Dumbledore knows not to underestimate the power of love, especially the love of a mother, and he refuses to trivialize the importance of love time and time again, knowing that it is the key to defeating Voldemort.

When Ron Curses Malfoy for Calling Hermione a Mudblood

Ron immediately defends Hermione when Malfoy calls her a Mudblood, trying to hit him with a slug curse (which backfires, but still — the sentiment is there, plus Hermione hits Malfoy later, so it works out eventually). Ron calls it "disgusting" that Malfoy would judge people based on whether or not they are "pureblood," which demonstrates that, despite his rough edges, at heart Ron sees Hermione for who she is as a person. And then, after he tells Hagrid what happened, Hagrid agrees and says proudly that "they haven't invented a spell our Hermione can' do" ( Harry Potter and the Chamber of Secrets ).

When Harry Doesn't Blame Ginny for Being Pulled In By Tom's Diary... and Neither Does Dumbledore

Harry doesn't fall into the trap of blaming Ginny for being controlled by Tom Riddle's diary in Harry Potter and the Chamber of Secrets, especially since he experienced its pull firsthand. When he explains the ordeal to the Weasleys, he even avoids mentioning the diary because he's not sure if everyone will understand that she was forced into everything by Voldemort and didn't act of her own free will. But Dumbledore instantly chimes in, confirming that Voldemort enchanted Ginny, and she is never punished for being a victim.

When Dumbledore Trusts Hermione to Rescue Sirius and Buckbeak

In Harry Potter and the Prisoner of Azkaban , Dumbledore trusts Hermione to save both Sirius and Buckbeak. Despite the fact that Harry's usually the one known for being the "hero," Dumbledore immediately recognizes that Hermione is the one with the skill and knowledge to pull off the rescue, so he gives her the responsibility of using the time turner to save the day.

When Viktor Krum Values Hermione for Her Intelligence

Instead of going for a girl who drools over him because of his fame, Viktor Krum spends hours in the library trying to catch Hermione's attention, because he values her intelligence. Plus, despite the fact that he's from a school notorious for dark magic, Krum remains honest and morally upstanding throughout his time in the Triwizard Tournament, treating all other champions and students with respect regardless of gender or school affiliation. Also, he continues writing letters to Hermione after the tournament (that apparently span over half a parchment in length), indicating that he truly values her friendship.

In the Hogwarts Quidditch world, there's one team for both male and female students, and Oliver Wood has equal expectations for all players. When Harry plays a little too nicely against his crush Cho Chang, Wood enforces this equal competition mentality, telling Harry that it's "no time to be a gentleman" and to "knock her off her broom" if he has to.

Harry consistently befriends females without sexualizing or objectifying them, and he never thinks that he "deserves" anything because of a friendship — he just appreciates the friendship for what it is and respects the women for who they are. When he befriends Luna, Harry doesn't judge her based on other people's opinions about her personality, but instead treats her respectfully and appreciates her quirky nature.

" 'Yeah, size is no guarantee of power,' said George. 'Look at Ginny.''What d' you mean?' said Harry.'You've never been on the receiving end of one of her Bat-Bogey Hexes, have you?' " — Harry Potter and the Order of the Phoenix

Even though a lot of people tend to push Ginny to the side and treat her like the "annoying little sister," Fred and George recognize that she's a force to be reckoned with.

When Harry Has Equal Expectations for Male and Female D.A. Members

Harry repeatedly treats students at Hogwarts with equal respect, regardless of gender or standing within the wizarding world, and his time teaching the D.A. reflects this, as he has equal expectations for the members of the group.

When Harry Stands Up For Professor McGonagall

When Everyone Stands Aside and Lets Molly Weasley Duel Bellatrix

In one of the most iconic scenes of Harry Potter and the Deathly Hallows , Molly Weasley solo duels Bellatrix Lestrange and defeats her. Though several students try to come to her aid, they step away when Molly tells them to get back. Rowling stated in an interview that she "wanted Molly to have her moment and to show that because a woman had dedicated herself to her family does not mean that she doesn’t have a lot of other talents."

Snape is the first person to tell Lily that she is a witch, and the first person to tell her about Hogwarts. Even though he comes from a prejudiced background, he initially says that it doesn't matter that she's from a Muggle family. He remains friends with Lily, though he is drawn to the dark side. Despite the fact that he ultimately fails to save her from Voldemort, Snape's love and respect runs so deep that he honors her memory by protecting Harry, even when he will receive nothing in return.

When Ron Wants to Save the House-Elves

Ron overcomes a lot of prejudices throughout the series, and one of the key moments when this happens is when he tells Harry that they need to evacuate the house-elves during the Battle of Hogwarts. Even though Ron states in previous books that having a house elf to do all his chores would be nice, when he tells Harry in Deathly Hallows that they can't order the house-elves to die for them, it's clear that he was actually listening to Hermione's S.P.E.W. rants all along. Turns out he has an emotional range that's a bit bigger than a teaspoon after all.