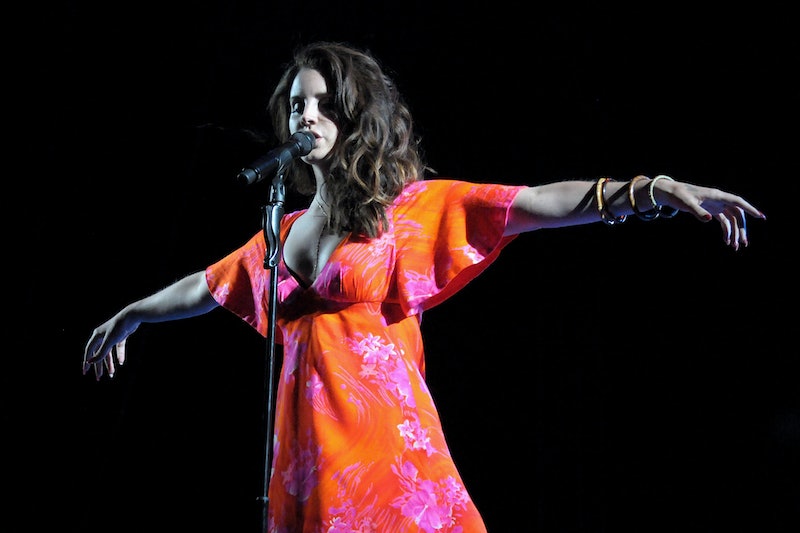 Romance is everywhere in pop — Katy Perry sees fireworks, Sia's got an elastic heart, and Taylor Swift's romances never go out of style. In a world where everybody's singing about finding love, Lana Del Rey's seriously jaded, un-romantic lyrics can't do anything but stand out. Of course, Del Rey's unsentimental musings about love — when she even broaches the subject — are a part of what makes her so enigmatic... but let's call a spade a spade. Lana Del Rey is not writing conventional love songs.

In fact, lyrically, she is remarkably dark about romance: she's been around the block, had her heart torn out of her chest, and now she's wary of doing it again. Even when she was still going by her original name, Lizzy Grant, her lyrics were profoundly nihilistic, rarely expressing even a shred of optimism about her ability to connect with the humans around her. They paint a picture of an artist dealing with narcissism, self-loathing, and addiction (and not necessarily overcoming any of them).

So, just in case you somehow thought that Lana Del Rey was the same as every other love-obsessed pop star on the scene, here are seven lyrics that prove Lana Del Rey's songs are complicated, cynical, and steeped in tragedy (aka anything but romantic).

The guy in "Pretty When You Cry" literally plays games with her heart because she looks pretty when she cries. Stop dating sociopaths, Del Rey!

"And I don't know how you get over, get over / Someone as dangerous, tainted and flawed as you..."

I'm pretty sure Lana Del Rey has just dated one wealthy alcoholic jerk after another, if "Million Dollar Man" is any indication. Her life seems like a revolving door of men with horrendous baggage in stylish suitcases.

Del Rey, have you liked anyone that you've been with? Because "Is This Happiness" doesn't really give off the vibe that you have.

"Will you still love me / When I'm no longer young and beautiful?"

Will he? The amount of times she has to ask it in "Young and Beautiful" makes me think he won't...

"This is what makes us girls / We don't stick together 'cause we put our love first / Don't cry about him..."

It's pretty heavily implied that the men in "This Is What Makes Us Girls" are emotionally abusive jerks. In fact, the whole song is about Lana Del Rey's real life experience as a teen alcoholic who was sent away to boarding school after she and her friends went too far with their partying. We've all been there, am I right?

"Darling, darling, doesn't have a problem / Lying to herself 'cause her liquor's top shelf..."

"You got that medicine I need / Dope, shoot it up, straight to the heart please / I don't really wanna know what's good for me"

If you think that's romantic, then, like Lana Del Rey, you may have some codependency issues to sift through in "Gods and Monsters."

If you need more proof that Del Rey is the queen of the anti-love song, then just listen to all of her albums back to back, or, hey, even all of her singles back to back. You'll either end up crying or developing a cynical view of romance that will make the next Ed Sheeran single really hard to listen to. Mark my words.

More like this
'Traumazine' Has Megan Thee Stallion Twitter Dancing Through Their Feelings
By Grace Wehniainen
Megan The Stallion’s “Anxiety” Song Shouts Out Britney Spears & Whitney Houston
By Grace Wehniainen
Lauv Is No Stranger To Taylor Swift, Drake, Ed Sheeran, & Fame
By Alyssa Lapid
Leona Lewis & Husband Dennis Jauch Welcomed Their First Child
By Darshita Goyal
Get Even More From Bustle — Sign Up For The Newsletter