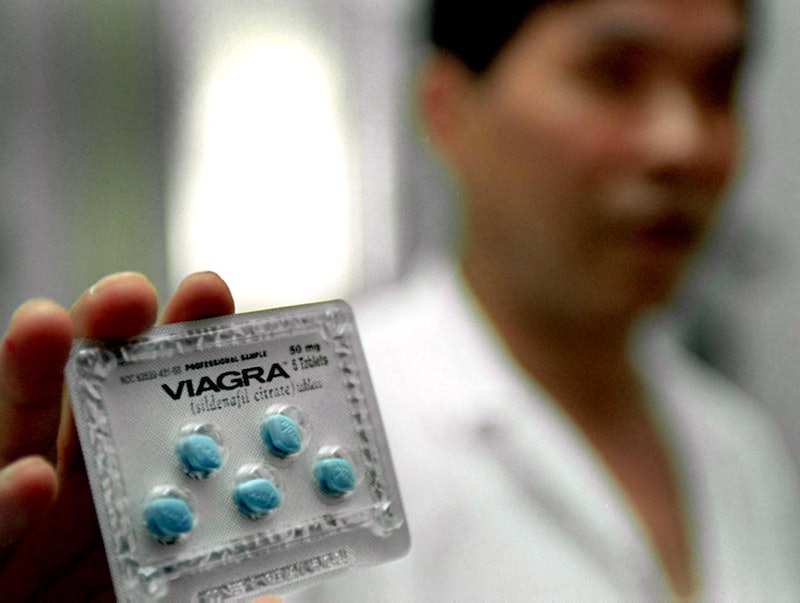 For 17 years Viagra has existed as an option for men suffering from erectile dysfunction. Although women tried the drug recreationally (think Samantha Jones in Sex and the City), there was no equivalent for women for all those years. We had to rely on getting our sex drive vamped up the old-fashioned way by downing oysters or putting a bag over our partner’s head — I kid! But now, finally, it could be for women to get their version of the “little blue pill.” Last week, an FDA advisory committee voted 18-6 to recommend that the agency approve flibanserin, “female Viagra", which helps boost women’s low sexual desires. And, according to ABC, over 50 million women experience sexual dysfunction. In other words, our time has come. UPDATE: On August 18th, the FDA officially approved flibanserin, the "female Viagra," which will be known as Addyi and will be in pharmacies as early as October 17.

Similarly to Viagra for men, flibanserin was created to help women who are lacking in the sexual desire area of their lives, especially those who suffer from a decrease in libido during the premenopausal and postmenopausal stages of their life.

But flibanserin doesn’t act like the men’s version of Viagra at all. In fact, it’s a completely different drug in more ways than one. Here are five ways in which flibanserin is not exactly the same as men’s Viagra.

1. It’s Pink Instead Of Blue

Who doesn’t love a little gender stereotyping in their meds? Because Viagra was blue, it only made sense (I guess?) that flibanserin be pink. You know, because ladies love pink. I don’t know a woman alive who doesn’t list pink as their favorite color!

Viagra for dudes is taken about an hour before the man plans to have sex (although up to four hours before is OK, too), which is kind of an inconvenience, because who knows when your chance to get it on just might arise — pun! Flibanserin is actually taken every day, because, after half a lifetime of taking the Pill every day, women can handle such a responsibility. Although, to be honest, a pain in the ass, too.

3. It Affects The Brain And Not The Body

While Viagra works by stimulating blood flow to penis (it is for erectile dysfunction after all), flibanserin works more as an antidepressant. It alters the chemistry in the brain, stimulating serotonin and dopamine, and other neurological chemicals that make people good and, apparently, interested in sex again.

Viagra is strictly about the physical aspect of making a penis work, and not creating any sort of sexual desire as flibanserin is supposed to do.

4. Its Side Effects Are Less Severe

As we’ve all learned from Viagra and Cialis commercials, “Seek immediate medical help if you experience an erection lasting more than 4 hours,” which is just the beginning of possible side effects for the drug.

It can also lead to changes or sudden loss of vision and hearing, chest pain, nausea, swelling in the limbs… the list goes on. However, the side effects for flibanserin have found to be sleepiness, and, especially when combined with alcohol, fainting or a sudden drop in blood pressure. Women definitely do not have to worry about a four-hour long erection. Thank god.

5. Its Success Rate Is Likely To Be Lower Than Viagra

Although flibanserin is still super new to the market, clinical psychologists are already thinking that its success rate might not be all that great. Whereas the success rate for Viagra is anywhere from 48 to 81 percent, depending on the severity of the erectile dysfunction, due to the complexity of women’s sexuality taking a pill isn’t exactly a cure-all.

A 2013 study published in The Journal of Sexual Medicine found that women who took flibanserin only saw, in the matter of four weeks time, an average increase of 2.5 “satisfying sexual events,” compared to the female participants who took placebo and reported a 1.5 increase. So… yeah, it’s more about where the female brain is at when it comes to sexual desire than anything else.

But that being said, it doesn’t mean a woman whose libido is on the low side shouldn’t give flibanserin a try. It may not work for everyone, but the same can be said for most, if not all, pharmaceutical drugs.