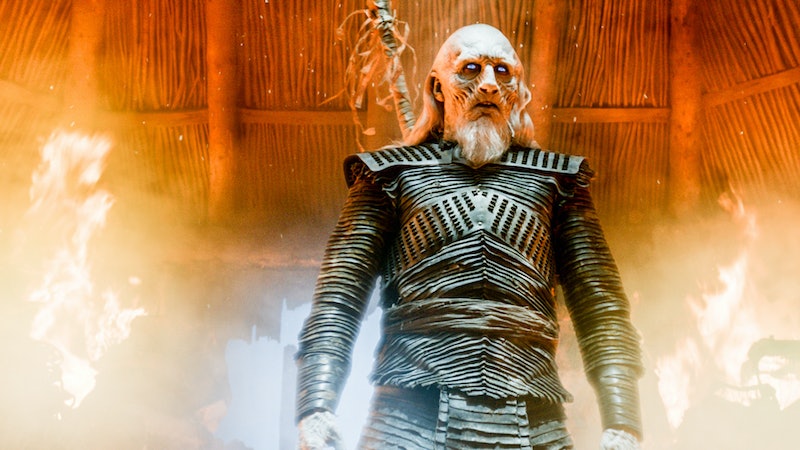 Since this is a technical guide, it's important to note that there is a difference between being a White Walker and being a wight on Game of Thrones. The only things that they have in common are eyes so blue they make Elijah Wood's look dull, and an affinity for cold climates. What we saw in mass quantities last Sunday night were wights. Those are the zombies that slowly turn into creepy skeletons — like the ones who attacked Bran, Hodor, and the Reed siblings at the end of Season 4. The White Walkers, known as The Others in the A Song Of Ice And Fire novels, are their leaders. For all we know, they are living beings as opposed to reanimated corpses.

We actually saw the "birth" of a White Walker in Game of Thrones Season 4, when the Night's King touched a baby and turned his eyes blue. So with that in mind, I'll be giving detailed instructions on both types of icy horrors.

They may have been missing for centuries, but the White Walkers are back, baby! Here's how to become a frozen badass.

For some reason (patriarchy) all of the White Walkers we have seen on the show are male.

2a. Have Craster As A Father

He was sacrificing his baby sons to the Night's King.

2b. Meet A Nice Pale Girl

Legend has it, the Night's King gave his soul over to a blue-eyed, moon-white woman during their "unholy union" and that's how he came to be the way he is today. So that's... another way to become a White Walker. They must have at least one female, and she sounds more like Morgana than Wendy Darling. I can't wait to meet this broad.

Maybe I'm the only one who wants to see, like, an angsty teen White Walker on this show. We've only seen infants and full grown men so far.

Just a protip, if you wanna make it in this "direwolf eat direwolf" world.

5. Learn How To Speak Skroth

That's their official language. It's even more cacophonous than Klingon.

Are you more of a follower than a leader? Maybe being a White Walker isn't for you. Here's how to become a wight.

1. Die Beyond The Wall

Simple enough, especially in the Game of Thrones universe.

2. Do Not Get Burned

Avoid fire at all costs. It if not your friend. You're a fan of ice, and only ice, from now on. Whatever you do, don't get cremated. You're just like the scarecrow in the Wizard of Oz, both in that flames are your nemesis and that you scare Crows... also known as members of the Night's Watch. Get it?

Only White Walkers can reanimate the dead and make them wights. When Dad's arms raise, so do you.

Congratulations! You have been reborn as a wight. Let's see those baby blues.

5. Say Goodbye To Your Body

You don't need flesh now that you're an undead minion. Hang onto your bones, and not much else.

6. Get Up And Start Killing

You said you wanted to be a wight, didn't you? Stumbling about and attacking the living is your job now. Pip pip!