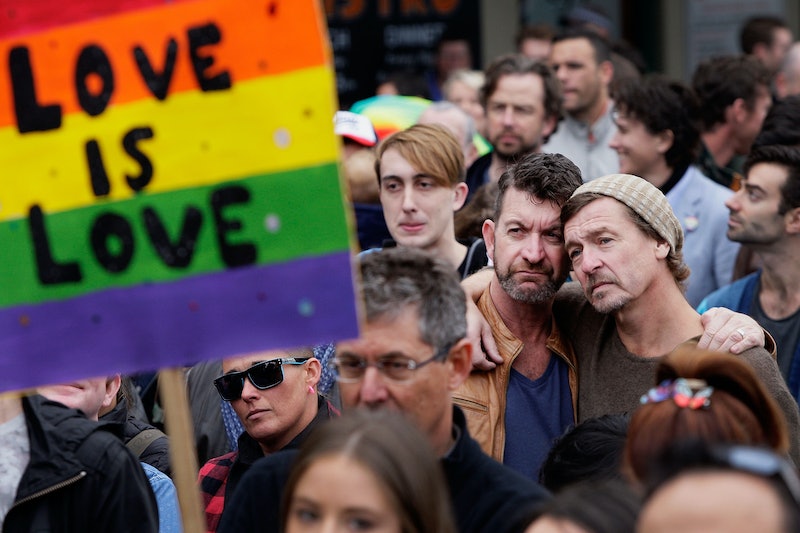 If you've been paying any attention at all to the news, you know that same-sex marriage is now legal in the United States. And while the celebration will likely last long into the night, there are a few things to keep in mind, even if you can't think of ways the gay marriage ruling affects you (because it does!). For what it's worth, mincing the idea of the sacred "traditional" marriage has always carried with it a huge legislative burden (should we give LGBTQ people the same rights as everyone else?) and the consequences of enacting massive change like the new SCOTUS ruling have already begun rearing their respective heads.

First of all, how dare they. How dare the Supreme Court rule that LGBTQ individuals have the ability to marry the ones they love? It's intrinsically skewed to favor people who have been oppressed for hundreds of years, and that's not equality, it's favoritism. Second — and this is important — why didn't they just ask you? You know a thing a two about gay rights. You even have a friend who's gay.

In the long run, same-sex marriage will do a lot of things to this country and its non-gay citizens. It's probably best that we know what they are so we can prepare.

You Now Have To Stockpile More Cash For Wedding Gifts

... And bridal shower gifts, and engagement gifts, and tuxes and bridesmaid dresses. Where does it end? According to a 2013 study by the National Bureau of Economic Research, estimates for how many LGBTQ people there actually are in the United States ranges between 10 and 20 percent, depending on survey methodology. And according to numbers out of the CDC, the average marriage rate among U.S. citizens is about 2.3 million couples per year.

That means there are probably anywhere from 50,000 to 100,000 LGBTQ people who probably want to get married, if you fuss with the numbers enough. With weddings a multi-billion dollar industry, sure, maybe that many gay-weddings will be good for the economy. No one can really predict though, except for you and your wallet — which is bound to start weeping over the airfare price of that destination extravaganza your cousin and his fiancé started planning immediately after the SCOTUS ruling.

You'll Probably Have To Stop Being Discriminatory Altogether

This is an outrage. Not only are more people coming around to the idea of same-sex marriage altogether (which, now that it's law, you probably should), aggregated data shows that people tend to open up to new topics if they see and hear about it more often.

"Increased visibility of gays and lesbians across the culture ... contribute[s] to these changes in public and legal opinion," wrote Evergreen State professor and Council on Contemporary Families public education director Stephanie Coontz, in an op-ed for CNN in March 2014. "Three-quarters of Americans now say they have a relative, friend or co-worker who is gay [and] it is harder to deny rights to people who are no longer faceless 'others.'"

With that in mind, it might not be long before a friendlier view on other divisive topics, like race and immigration, catch us off guard and force us to become nicer people, like a wave of kindness and positivity that slowly wipes the slate clean. Ugh.

First marriage, now what? Adoption? Tax and social security benefits? General spousal privileges? Everyone knows that once you open the door to gay marriage, it can lead to other things like them being able to be better parents than you are to your dog, and that's just rubbing salt in the wound.

"Gay couples legally married in any state should be entitled to veterans and Social Security benefits identical to any other married couples," lobbied Hawaii Sen. Brian Schatz during a stalemated vote on military veteran benefits for same-sex spouses in March."

Of course, there are still a few people who consider the SCOTUS ruling a detriment to society, despite the fact that over half of the country believes gay couples should have the right to marry (that's according to a Pew Research poll conducted in April). "[Same-sex marriage] is not only a defeat for Christian principles, but a defeat for our island and the whole of humanity," claimed Catholic. Guam Archbishop Anthony Apuron in a statement following the U.S. Territory's prolific vote to allow gay marriage on June 5.

The Term "Traditional Marriage" Is Over

... Actually, you know what — scratch that. Maybe it's not such a bad thing after all. It's not your wedding day, so you might as well just enjoy the cake and watch two people in love put a ring on it.